NEW YORK (REUTERS) - New York Governor Andrew Cuomo on Saturday (May 2) pushed back against what he called premature demands that he reopen the state, saying he knew people were struggling without jobs but that more understanding of the new coronavirus was needed.

As governors in about half of the United States partially reopen their economies over this weekend, Cuomo said he needed much more information on what the pandemic was doing in his state, the hardest hit by the disease, before he loosens restrictions aimed at curbing its spread.

"Even when you are in uncharted waters, it doesn't mean you proceed blindly," he said.

"Use information to determine action - not emotions, not politics, not what people think or feel, but what we know in terms of facts."

New Jersey Governor Phil Murphy echoed Cuomo's slow-go restart approach, even as he reported "positive trends," including a decline in the number of hospital patients with Covid-19, the disease caused by the novel coronavirus.

While the number of deaths has trended lower in recent days, New Jersey's toll, second only to New York's, stood at 7,742, which Murphy cited as a key reason for maintaining his stay-at-home order.

"The family, friends and neighbours who we have lost are the reason why we cannot rush our restart," he said at a news briefing.

"We need to keep seeing these lines moving in these directions before we can put New Jersey on the road back, and before we're able to responsibly restart our economy."

An many US eastern seaboard residents enjoyed a perfect spring day on Saturday, those in New Jersey had access to more outdoor space as Murphy allowed the state's parks and golf courses to reopen for the first time in a month, warning they would be shut again if social distancing requirements were violated.

"Anecdotal and preliminary" reports suggest that the rules were being observed, he said.

Georgia and Texas are leading the way in the partial reopening of businesses that had been shuttered by the pandemic.

Leaders in those and several other states where the coronavirus has had less of an impact are under pressure to allow people to return to work, as government data released this week showed 30 million Americans have sought unemployment benefits since March 21.

Cuomo pointed to the roughly 900 new coronavirus cases that hospitals in New York are still reporting daily and the fact that officials do not know where those infections are coming from, as reason enough to continue keeping the Empire State shut down.

The governor also released the preliminary results of a statewide antibody survey of about 15,000 people showing that 12.3 per cent had been previously infected with the virus. 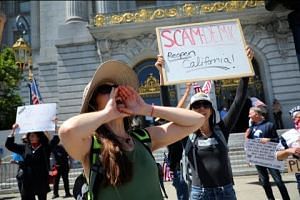 It confirmed the results of another test with a smaller sample size released about 10 days ago showing that one in five New York City residents has had the virus, with the Bronx borough seeing the highest number positive for antibodies at 27.6 per cent.

As of Saturday, the number of known infections nationwide had climbed to more than 1.1 million, including about 65,000 deaths, according to a Reuters tally.

As testing increases across the country, so does the number of cases. North Carolina on Saturday posted a record number of new cases with 551 infections, as did Puerto Rico, with 182.

Iowa hit a record for the second straight day. Overall in the United States, there were 34,000 new cases on Friday, the highest daily total since April 24.

On the National Mall in Washington, thousands of people gathered to view a flyover by the U.S. Air Force Thunderbirds and Navy Blue Angels jets in honour of healthcare workers and others battling the pandemic, applauding after the aircraft soared over the Lincoln Memorial and past the White House.

Despite the size of the crowd, most maintained social distancing, with some wearing face masks and others not.