WASHINGTON (AFP) - Chinese Defence Minister Wei Fenghe warned his US counterpart in a phone call on Thursday (Aug 6) to avoid firing up bilateral tensions, a day after Washington angered Beijing by announcing it would send a senior official to visit Taiwan.

Wei told US Defence Secretary Mark Esper in a 90-minute phone call to "stop erroneous words and deeds" and "avoid taking dangerous moves that may escalate the situation", referring directly to Taiwan and the South China Sea, the Xinhua News Agency reported.

But Esper told Wei that China was undertaking destabilising activity, according to the Pentagon, showing no sign of backing down as the US rejects China's claims of sovereignty in both areas.

"The secretary called for greater PRC transparency on Covid, expressed concerns about PRC destabilising activity in the vicinity of Taiwan in the South China Sea and called on the PRC to honour international obligations," said Defence Department spokesman Jonathan Hoffman.

The call came as the United States steps up a broad diplomatic campaign against Beijing, accusing it of everything from massive human rights violations to attempting to colonise the South China Sea region, to using technology like popular app TikTok to harvest the personal information of hundreds of millions of people worldwide.

On Wednesday, Beijing bristled in anger after Washington said it would send Health Secretary Alex Azar to Taiwan, where he will meet with President Tsai Ing-wen and other officials.

Azar will be the most senior US Cabinet member to visit Taiwan since 1979, which, owing to China's territorial claim on the island, does not have official diplomatic relations with the United States despite their close alliance.

Wang Wenbin, a spokesman for China's Ministry of Foreign Affairs, called for the visit to be cancelled.

"China firmly opposes official exchanges between the US and Taiwan," Wang said Wednesday.

"We urge the US to abide by the one-China principle... to avoid seriously endangering Sino-US relations, as well as peace and stability across the Taiwan Strait."

Beijing views Taiwan as its own territory - vowing to one day seize it - and bristles at any moves by other countries to recognise or communicate with Taipei. 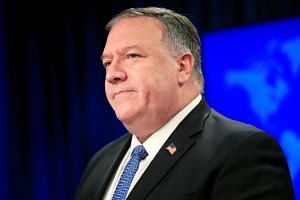 How Cold War between China and US is intensifying

Tsai, though, called the visit "another testament to the strong Taiwan-US partnership," a relationship underscored by extensive defense cooperation and US arms sales.

The long call came as Esper says he hopes to visit China before year-end for talks on improving crisis communications, which are increasingly important as US naval forces regularly conduct operations near Taiwan and in the South China Sea, effectively challenging China's territorial claims.

According to Hoffman, Esper underscored the need for a "constructive, stable and results-oriented defence relationship" between the two sides.

Esper also raised the issue of China's mishandling of the initial Covid-19 outbreak, as President Donald Trump blames Beijing for the global pandemic that has killed nearly 160,000 Americans.

But no agreement was made on a trip, Hoffman said, amid constant worries that some sort of accident could bring the two sides to a clash.

The call came as the US and China butt heads on numerous fronts.

Two weeks ago Washington ordered Beijing to close its consulate in Houston, labelling it a hub of spying and theft of US corporate secrets. In retaliation China shut the US consulate in Chengdu.

And on Wednesday Secretary of State Mike Pompeo said the United States would seek to ban other Chinese apps and restrict the cloud computing services to Americans by major Chinese companies like AliBaba and TenCent.

"The US move to turn China into an adversary is a fundamental strategic miscalculation," Chinese Foreign Minister Wang Yi said on Wednesday.

"It means that the US is funnelling its strategic resources in the wrong area," he said, according to Xinhua.