QUEBEC CITY (REUTERS) – The United States and Canada swung sharply towards a diplomatic and trade crisis on Sunday (June 10) as top White House advisers lashed out at Canadian Prime Minister Justin Trudeau a day after US President Trump called him “very dishonest and weak.”

The spat drew in Germany and France, who sharply criticised Trump’s decision to abruptly withdraw his support for a Group of Seven communique hammered out at a Canadian summit on Saturday (June 9), accusing him of destroying trust and acting inconsistently.

Canadian Foreign Minister Chrystia Freeland responded to the White House comments by saying that Canada will retaliate to US tariffs in a measured and reciprocal way and that Canada will always be willing to talk.

Hours after Trump withdrew his support for the joint statement and attacked Trudeau, Kudlow and trade adviser Peter Navarro drove the message home on Sunday morning news shows in an extraordinary assault on a close US ally and neighbour.

“(Trudeau) really kind of stabbed us in the back,” Kudlow, the director of the National Economic Council who had accompanied Trump to the summit of wealthy nations on Saturday, said on CNN’s State of the Union.

Navarro told Fox News Sunday: “There is a special place in hell for any leader that engages in bad faith diplomacy with President Donald J. Trump and then tries to stab him in the back on the way out the door and that’s what bad-faith Justin Trudeau did with that stunt press conference, that’s what weak dishonest Justin Trudeau did.”

Trudeau, in Quebec City for bilateral meetings with non-G7 leaders after the summit, did not respond to reporter questions as he arrived, but his office pointed to Freeland as the minister responsible for Canada-US relations.

When Trump’s tweets withdrawing support from the G7 statement hit on Saturday, the prime minister’s office said Trudeau had not said anything in his closing news conference he has not said to Trump before.

'We will not be pushed around': Trudeau
Trudeau says no to bringing Russia back into G7

Freeland told reporters that she had met with US Trade Representative Robert Lighthizer on Friday and would speak to him later on Sunday, adding that she believes a deal to renew the North American Free Trade Agreement is still possible.

Some 75 per cent of Canadian exports go to the United States, making Canada uniquely vulnerable to a US trade war. 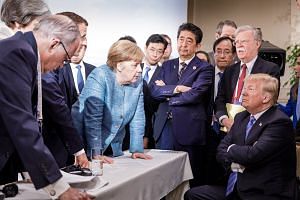 Having left the G7 summit in Canada early, Trump’s announcement on Twitter that he was backing out of the joint communique torpedoed what appeared to be a fragile consensus on a trade dispute between Washington and its top allies.

“The G7 was a forum for friends – democracies with the same value system – to discuss issues of common interest. Now there is a question mark over that. But it did not start with this G7, but with the election of Donald Trump,” said a European official.

Trump also said he might double down on import tariffs by hitting the sensitive auto industry, throwing the G7’s efforts to show a united front into disarray.

“In a matter of seconds, you can destroy trust with 280 Twitter characters,” German Foreign Minister Heiko Maas said when asked about Trump’s U-turn.

France is also standing by the G7 communique, a French presidency official said.  “International cooperation cannot depend on being angry and on sound bites. Let’s be serious,” the French official, speaking on condition of anonymity, added.

Trump has infuriated the European Union, Canada and Mexico by imposing tariffs on steel and aluminum imports.

“This is of great concern to the G7. I do not know where we go from here. It is impossible to predict what Trump will do next,” said a senior G7 official on the summit outcome.

Europe’s answer must be to stick even closer together, defend its interests and strengthen alliances with countries such as Japan and Canada, Maas said.

“The world as we know it, namely the US-led rules-based multilateralism, is now in serious danger of unraveling, as illustrated at the G7 meeting,” said Erik Nielsen, chief economist at Unicredit Bank.

In his news conference, Trudeau had spoken of retaliatory measures that Canada would take next month in response to Trump’s decision to slap tariffs on steel and aluminum imports.