WASHINGTON (NYTIMES) - People who look at their electronic devices while crossing the road in Montclair, California not only risk being knocked down by a vehicle. They are also breaking the law.

Officials in Montclair, in Southern California, decided that their 39,000 residents needed a heads-up - literally.

There were accidents that resulted in part from pedestrians burying their noses in smartphones with their minds miles away.

Something had to be done about these "cellphone zombies", said Mr Edward Starr, the city manager.

So Montclair made it illegal to cross streets while on a phone, texting or listening to music with buds in both ears. Fines of US$100 (S$132), and as much as US$500 for repeat offences, will go into effect in August.

Other places have had the same idea.

Honolulu enacted a comparable law months ago. Rexburg, Idaho, a town about the same size as Montclair, adopted a similar ban in 2011 after the shock of having five pedestrians die. It has not had a single pedestrian fatality since.

Legislation along the same lines has been contemplated in several states and major cities. In New York, Mayor Bill de Blasio said last Thursday that he, too, was open to the idea.

Maybe it is time for every municipality to get serious about distracted walking, as it is called, even though distracted driving is plainly a bigger concern. This is the belief theologically held by many motorists that they can read e-mail, text friends, call the office and all the while stay fully focused on the road. They are delusional. They are also dangerous. 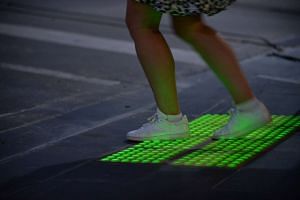 Singapore trials LED lights on pavements: What other places are doing to keep smartphone zombies safe

It is perhaps not a shock that in this age of mobile phone zombies, traffic deaths in the United States have risen, after years of steady declines thanks to safer cars and improved road design. The 2016 toll was 37,461, or 14 per cent higher than that in 2014. The final tally for 2017 is expected to be no more heartening.

The increase in pedestrian deaths, which account for 16 per cent of all traffic fatalities, is even more discouraging. There were 5,987 of them in 2016, according to the National Highway Traffic Safety Administration. Expectations are that 2017 will end up with a toll at least that high. That is a rise of 22 per cent from the 4,910 registered in 2014.

No doubt, inattentive driving is to blame in large measure. But distracted walking is a likely factor, too.

Enforcing an ordinance like Montclair's would not be easy. Police officers cannot be stationed at every corner. And as sure as a sunrise, some people will wail about personal freedoms being violated. But there is a social contract to be observed. When one ventures forth in public, he assumes certain responsibilities, be it preserving his own life or having regard for others.

Mr Starr said that people in Montclair seem to get it, including youngsters who deem smartphones a birthright. "Students are actually pretty understanding, and even tell us this was really needed," he said of the new rules. That's because they know their lives matter."