LOS ANGELES (REUTERS) - A Southern California wildfire - which authorities say was set by an arsonist with a grudge against a neighbour - doubled in size overnight into Friday (Aug 10) as crews built fire lines and fought to protect thousands of homes in a lakefront community.

The Holy Fire, which broke out on Monday in Holy Jim Canyon in Orange County southeast of Los Angeles, has already destroyed 12 structures and was only 5 per cent contained as of Friday.

"Extreme fire behaviour was observed to the north and east portions of the fire. Steep terrain, dry fuels, and inaccessible areas continue to be a factor in fire spread," the US Forest Service said on the Inciweb fire tracking website.

Forrest Gordon Clark, 51, who owns a cabin in Holy Jim Canyon, was arrested earlier this week after a standoff with police and charged with arson, making criminal threats and resisting arrest.

A spokeswoman for the Orange County District Attorney's Office said Clark had previously made threats against a neighbour, but declined to elaborate.

Volunteer fire chief Mike Milligan told the Orange County Register that Clark has long feuded with other cabin owners in the canyon and last week sent him an email warning: "This place will burn."

More than 21,000 people have been evacuated in and around the city of Lake Elsinore, where flames and billowing smoke rose into the sky at the edge of the city of 60,000 near the Santa Ana Mountains. 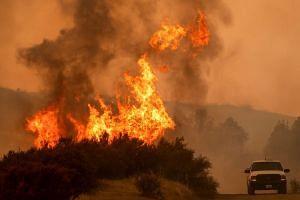 Largest wildfire in California history to burn for rest of August 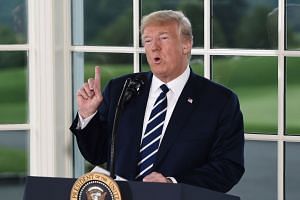 Governor Jerry Brown has declared a state of emergency for the area.

The Holy Fire was one of several blazes burning across California that have displaced tens of thousands. Smoke from the western wildfires has reached the East Coast and beyond, the National Weather Service has said.

About 2.2 million hectares have been blackened in more than a dozen states during this year's extremely active wildfire season, according to the National Interagency Fire Centre.

In Northern California, a mechanic helping to fight the Carr Fire, burning around Redding, was killed in a car crash on Thursday, the eighth person to die in that conflagration.

About 160km south-west of the Carr Fire, nearly 4,000 firefighters are battling the Mendocino Complex Fire, which has burned 124,240 hectares to become the largest fire on record in California.