WASHINGTON (REUTERS) - Far-right Brazilian President Jair Bolsonaro, on his first official visit to Washington, declared himself an unabashed admirer of the United States and said he was seeking a new era of close relations after what he called decades of anti-American leaders.

The day before he is due to meet like-minded populist President Donald Trump at the White House, Mr Bolsonaro told business leaders he would like to partner more with the United States. Brazil had changed, he said.

"The American people have always been an inspiration for me," said Mr Bolsonaro. "We have good relationships around the world but I am extending my hands so that the relationship with the United States is increasingly more important."

An outspoken Trump admirer, Mr Bolsonaro took power in January, vowing to realign Brazil with more advanced economies, particularly the United States. That represents a change in diplomatic priorities after over a decade of leftist party rule that had seen Brazil forging closer ties with regional allies.

Brazilian Economy Minister Paulo Guedes echoed Mr Bolsonaro's message of friendship towards the United States but reminded the audience that China, Brazil's top trading partner, would be there to pick up the slack if America did not open itself to more trade with Brazil.

"They are moving in, trying to invest," Mr Guedes said of the Chinese. "And we are looking to our partner and saying, 'look, what should we do?' The president loves Americans. Me too of course. We love Disneyland and Coca Cola."

A US senior administration official, who spoke to reporters on condition of anonymity, welcomed the change in Brazil's diplomatic stance.

"Even the friendliest of Brazilian governments was never really that friendly. Here we have now a government in Brazil we truly consider an ally," the official said.

Mr Bolsonaro's meeting with Mr Trump came together within weeks of the Brazilian leader's inauguration after the two political firebrands expressed mutual admiration for each other. Mr Bolsonaro earned the nickname "Trump of the Tropics". 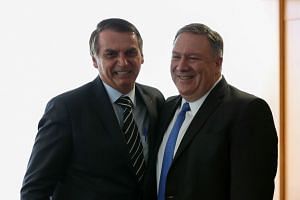 China, however, promises to loom large over the meeting.

The Brazilians showed little interest in getting caught up in the US trade war with China, a top buyer of soy who has long since replaced the United States as Brazil's top trade partner.

But US officials have warned their Brazilian counterparts of their security concerns about Chinese telecom equipment maker Huawei Technologies during talks in Washington, the senior American official told reporters.

The three-day visit underscores Mr Bolsonaro's embrace of US influence in Latin America to confront what he calls a communist threat against democracy - a theme he remarked on at a dinner on Sunday (March 17) evening with his ministers and right-wing thinkers.

The ideological common ground between the leaders has raised expectations of greater cooperation between the two biggest countries in the Americas, although their aides have played down the potential for major breakthroughs on this visit.

The two governments did sign an agreement to safeguard US space and defence technology that opens the way for US companies to use Brazil's Alcantara space centre to launch satellites.

The accord needs to be ratified by Brazil's Congress, which thwarted a previous attempt at a US-Brazilian space partnership in 2003 after it was opposed by then leftist president Luiz Inacio Lula da Silva.

In a gesture aimed at boosting tourism, Brazil said it was waiving a visa requirement for visitors from the United States. The US government is not planning to reciprocate with a visa exemption for Brazilians, according to officials with knowledge of the matter.

While it is not a state visit, the Trump administration was keen to roll out the red carpet for Mr Bolsonaro. The two leaders will give a high profile joint news conference in the Rose Garden on Tuesday.

Mr Bolsonaro also met with CIA director Gina Haspel at the spy agency's headquarters in Virginia to convey the importance he places on "fighting organised crime and drug trafficking and the need to strengthen intelligence", his office said.