"It's taken longer to find folks than years in the past, and it's more work to get them," he told The Straits Times. "It's not like the old days, when you'd just put out an ad and you'd have a line of people for the job."

In the past, Mr Mayson would simply post about job openings for servers or bartenders on a Facebook page for people in the restaurant industry and immediately net a pool of qualified applicants.

This time, he had to post on several sites, including job listing portal Indeed and ad site Craigslist, while his assistant manager and chef also turned to their personal social media pages to fill the positions in the restaurant which opened last week.

Even though he managed to hire 48 people, he still needs 10 more employees to be able to open the second storey of his restaurant, which will double as a live entertainment venue at night.

With its economic recovery well underway, America is brimming with jobs but businesses are having trouble finding enough workers to fill job openings, particularly in the services industries such as restaurants and hotels.

Some 850,000 jobs were added last month - a jump from the average 546,000 jobs that were added in each of the previous three months. But it still leaves the US economy 9 million jobs short of what it should have.

The first five months of this year saw only about 24 per cent of unemployed workers moved into jobs each month, well below the 29 to 34 per cent expected, they wrote.

Several factors may be holding back this transition, including "time needed to find a job, the lingering effects of the pandemic and the pace of vaccinations, and increased and expanded unemployment insurance", they said.

Job openings remain at historic high, reaching 9.2 million in May - around where they were a month before, the Labour Department said last Wednesday (July 7).

That economic reality is reflected in the thousands of shopfronts across the United States that remain shuttered, displaying "help wanted" signs in their windows.

Restaurant employment rose for the sixth consecutive month this month (June). But despite the steady gains, eating and drinking places were still 1.3 million jobs below where they were before the pandemic, the National Restaurant Association noted.

"A lot of folks have left the industry," said Mr Mayson, who knows several friends who have started new careers in different fields, motivated by higher salaries or being able to work from home.

"The pandemic really did sort of shake people up in a way that was like, 'Oh, maybe my job is not as secure. Maybe my skill set is not as secure as I thought it was,'" he added.

In the US, remote work helps some in tech save money, find time for family

Labour markets in Europe are gaining momentum but at different speeds

Americans are quitting jobs at record rates and finding new ones with better pay or working conditions - a hallmark of a hot labour market, say economists.

In May, 2.5 per cent of workers quit their jobs, a slight dip from 2.8 per cent in April, which had been the highest quit rate ever recorded by the Labour Department.

Said Dr Furman and Mr Powell: "There are anecdotal reports of early retirements, people rethinking their career trajectories, reallocations as people leave their temporary pandemic jobs, and people being able to afford to quit their jobs because of stimulus payments or in some cases the possibility of getting unemployment insurance.

"But it is unlikely that any of these are the main story - which is simply that when jobs are plentiful, workers tend to have more confidence to quit their jobs to find better ones."

The upshot is that workers, who are now in high demand, have the leverage to be more selective about the jobs they take, and it is not unusual for businesses to offer signing bonuses to attract workers.

Some employers are also offering perks like the option of working from home, at least some of the time, on a sustained basis.

A survey by job search website FlexJobs in April found that nearly 40 per cent of workers would consider quitting if their bosses made them return to the office full-time. Three months on, with staffing plans more firmed up, some workers are making good on their word and looking for greener pastures.

Flexjobs career development manager Brie Reynolds told ST: "We're starting to hear, at least anecdotally from our clients and customers, that when a company says that someone needs to come back into the office, that person is often times looking for a new job because he doesn't want to go back to the office.

While workers may not quit immediately, they are actively seeking a new job that allows them to work remotely so they can have a better work-life balance, she added.

"There is some leverage, especially in this type of economy, where it really does seem like the power rests a little bit more in the hands of the individual professional rather than the employer," said Ms Reynolds. 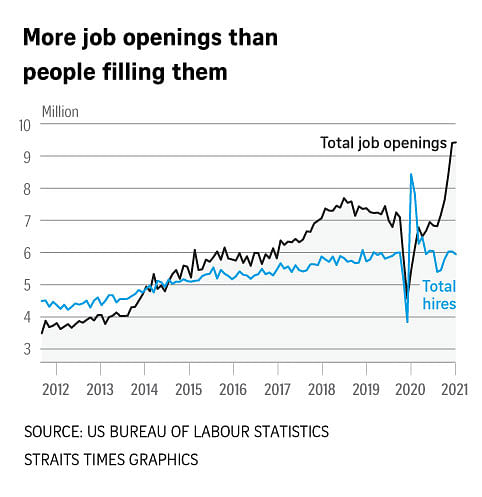 She recounted the case of her job-seeking client - a stay-at-home father before the pandemic - who is "willing to kind of wait it out to get that right position that's going to allow him to do remote work".

"I think that there are probably a lot of folks in that position," said Ms Reynolds.

But there are other pull factors besides telecommuting. The work environment in the end was also what attracted staff to his restaurant, Mr Mayson said, adding that he did not have to offer extra perks.

"I'm doing a restaurant that is joyful and happy," he said. "And I'm not requiring people to wear uniforms. I'm asking people to dress as if they were going on a first date with someone they wanted to impress, but still be themselves. Those sorts of things, when I was a server, would have been like gold to me."