JAKARTA/CHICAGO (AFP, BLOOMBERG) -  A US aviation regulator plans to mandate that airlines follow an advisory issued by Boeing Co. on how pilots should handle false readings from a plane sensor that authorities say occurred on a 737 Max jet that crashed off the Indonesian coast last week.

The Federal Aviation Administration on Wednesday (Nov 7) issued a statement saying it plans to issue an airworthiness directive on the issue and “will take further appropriate actions depending on the results of the investigation.”

The FAA also notified other regulatory agencies around the world, which typically follow the US agency’s lead on safety matters.  The operations-manual bulletin was issued Tuesday, Boeing said in a statement posted to Twitter, and tells flight crews to use existing guidelines when dealing with erroneous inputs from the so-called angle of attack sensor.

That sensor is intended to maintain air flow over a plane’s wings but if it malfunctions it can cause the plane’s computers to erroneously think it is in a aerodynamic stall – which can then cause aircraft to abruptly dive.

The bulletin is based on preliminary findings from last week's crash of one of the planes off the coast of Indonesia.

Under some circumstances, such as when pilots are flying manually, the Max jets will automatically try to push down the nose if they detect that an aerodynamic stall is possible, a person familiar with the matter said.

One of the critical ways a plane determines if a stall is imminent is the angle of attack measurement. 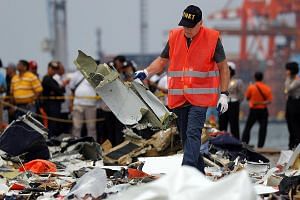 The Lion Air 737 Max 8 jetliner plunged into the Java Sea minutes after takeoff from Jakarta airport, nosing downward so suddenly that it may have hit speeds of 600 miles an hour before slamming into the water.

Moments earlier, the pilots radioed a request to return to Jakarta to land, but never turned back toward the airport, according to Indonesia’s National Transportation Safety Committee and flight-track data.

The committee said the pilots were dealing with an erroneous airspeed indication.  The probe into what happened with the Lion Air plane “is ongoing and Boeing continues to cooperate fully and provide technical assistance at the request and under the direction of government authorities investigating the accident,” the company said in its statement.

The jet reported a discrepancy in its angle of attack sensor during a flight from Bali to Jakarta the day before it crashed. The device was replaced in Bali after pilots reported a problem with airspeed reading, the Indonesian transportation safety regulator said Wednesday.

Boeing has delivered 219 Max planes – the latest and most advanced 737 jets – since the models made their commercial debut last year with a Lion Air subsidiary. Boeing has more than 4,500 orders for the airliners, which feature larger engines, more aerodynamic wings and an upgraded cockpit with larger glass displays.

The single-aisle family is Boeing’s biggest source of profit.

Aircraft and engine manufacturers routinely send bulletins to air carriers noting safety measures and maintenance actions they should take, most of them relatively routine. But the urgency of a fatal accident can trigger a flurry of such notices.

After an engine on a Southwest Airlines Co. plane fractured earlier this year over Pennsylvania, killing a passenger, CFM International Inc. issued multiple bulletins to operators of its CFM56-7B power plants.

Aviation regulators such as the US FAA and the European Aviation Safety Agency often follow such actions by mandating that carriers follow the bulletins.

Pilots raise and lower the nose of Boeing jetliners by pushing and pulling on a yoke in the cockpit, which controls panels at the tail known as elevators. In addition, a system known as elevator trim can be changed to prompt nose-up or nose-down movement.

The angle of attack readings are fed into a computer that in some cases will attempt to push down the nose using the elevator trim system.

In the early days of the jet age, the elevator trim system was linked to several accidents. If pilots aren’t careful, they can cause severe nose-down trim settings that make it impossible to level a plane.

Such an issue arose in 2016 at Rostov-on-Don Airport in Russia when a FlyDubai 737-800 nosed over and slammed into the runway at a steep angle, according to an interim report by Russian investigators. That case didn’t involve the angle-of-attack system. One of the pilots had trimmed the plane to push the nose down while trying to climb after aborting a landing, the report said. All 62 people on board died.

Under some circumstances, such as when pilots are manually flying, the Max jets will automatically try to push down the nose if they detect that an aerodynamic stall is possible, the person said.

In a statement on Nov  5, the Indonesian transportation safety committee called on the US National Transportation and Safety Board and Boeing “to take necessary steps to prevent similar incidents, especially on the Boeing 737 Max, which number 200 aircraft all over the world”.

The committee is charged with finding the cause of the crash.  While additional details of the bulletin aren’t known yet, the warning is the first concrete action to come out of the accident investigation.

Boeing has an existing procedure that allows pilots to continue flying in the event that angle of attack readings become erroneous.

“We are still focusing on handling the families of the victims, including returning their remains to their home,” Sirait said by phone.  “We will leave the investigation of the accident to KNKT,” he said, referring to the Indonesian transportation safety committee.

Indonesia’s Garuda airlines said it hadn’t received any bulletins from Boeing either.

“We will tighten up our monitoring and inspections and wait for final report on the investigation,” Garuda Indonesia’s president director I Gusti Ngurah Askhara Danadiputra wrote in a text message. “So far, there’s no disruption on the operation of our Max jet.”