WASHINGTON (WASHINGTON POST) - One week after they were arrested at a Philadelphia Starbucks, the two black men seen in a cellphone video viewed more than 11 million times went on Good Morning America on Thursday (April 19) to describe how arriving 10 minutes early to a business meeting put them in handcuffs.

Rashon Nelson and Donte Robinson, along with their lawyer Stewart Cohen, spoke with GMA's Robin Roberts to describe their encounter with the white Starbucks manager who called 911 on them and the police who soon arrived.

Starbucks executives, including the company's chairman Howard Schultz and its chief executive Kevin Johnson, have met the men to personally apologise and have appeared in television interviews in the wake of protests outside the Philadelphia location.

But this was the first time Nelson and Robinson appeared to tell their story.

"I want to make sure this situation doesn't happen again," Robinson said. "What I want is for a young man or young men to not be traumatised by this and instead (be) motivated and inspired."

The men said they arrived at the Center City Starbucks at 4.35 for a 4.45 business meeting.

Immediately upon walking in, Nelson asked the manager if he could use the restroom. The manager said the restrooms were for paying customers only. 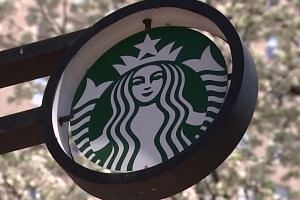 Starbucks to close 8,000 US stores for racial tolerance training

"And I just left it at that," Nelson said.

Robinson said that after Nelson got back to the table, the manager came over to their table to ask if she could help with any drinks or water. Robinson said they had water bottles with them and were waiting for a meeting.

At 4.37 - two minutes after the men arrived - the manager called the police to report "two gentlemen in my cafe that are refusing to make a purchase or leave".

Officers arrived at 4.41, according to tapes released by the Philadelphia Police earlier this week.

Robinson said that when he saw police arrive, he thought "they can't be here for us". Nelson said the police told him and Robinson they had to leave without any discussion about what was happening between them and the manager. Then they were arrested.

Robinson said they weren't read any rights or told why they were being arrested.

Cohen, who appeared in the segment alongside Nelson and Robinson, said that from the video of the men's arrest, "the facts speak for themselves".

"There's not a single witness that says that these men were misbehaving, and you can see and hear that in the video," Cohen said.

Robinson said that during his arrest, he thought about his family and community and that he was "just trying to process the situation".

Roberts asked Robinson about Starbucks's policy that restricts non-paying customers from using the restroom or sitting in the store, as well as the fact that the police told him and Nelson to leave.

"I understand that rules are rules, but what's right is right, and what's wrong is wrong," Robinson said. "That's in any situation, whether there's race involved or anything."

A Starbucks spokesman told The Post on Wednesday that "in this particular store, the guidelines were that partners must ask unpaying customers to leave the store, and police were to be called if they refused".

"In this situation," the spokesman said, "the police should never have been called. And we know we have to review the practices and guidelines to help ensure it never happens again."

Cohen said he and his clients suggested that along with Starbucks, they engage in a mediation with a retired federal judge in Philadelphia. Cohen said Starbucks agreed to that proposal, which necessitates that the conversations between executives and Nelson and Robinson remain confidential.

Nelson said he hoped his experience could be used as a "stepping stone" to future progress. "Everyone is blind to it, but they know what's going on," he said. "Just really taking those actions and putting them into place. And helping people understand this is not just a black people thing, this is a people thing."

On Wednesday, Howard Schultz told Gayle King of CBS This Morning that he had met the manager and that she "recognises that perhaps that call should not have been made".

When the manager called the police, Schultz said she likely thought they would come to her location and talk to the men about what they were doing inside.

The men were waiting for a third man to arrive for a business meeting when the manager called 911 about "two gentlemen in my cafe that are refusing to make a purchase or leave". One or both of the men had asked to use the restroom but were told no because they had not bought anything.

Also on Wednesday morning, Kevin Johnson appeared on Fox Business Network's Mornings With Maria and talked about meeting the men who were arrested.

"I had the opportunity to apologise to those two gentlemen for what happened to them," he said. "They didn't deserve that."

On Tuesday, Starbucks announced that it would close 8,000 US stores for an afternoon next month for racial-bias training for 175,000 employees. That announcement came after days of protests at the Philadelphia Starbucks and a personal apology from Johnson.