WASHINGTON (WASHINGTON POST) - For decades, Jeffrey Epstein, the finance whiz who has been charged with sex trafficking, moved with open ease between the planet's highest echelons of power and what prosecutors portray as a sordid world of recruiting and sexually abusing teenage girls.

He met leaders of the nation's top universities and research labs, travelled with presidents and princes, and managed money for leading business figures. He said the minimum investment he would handle was US$1 billion (S$1.35 billion).

Even as dozens of women looked to police, prosecutors and courts to hold Epstein to account for his alleged sexual abuses, he was amassing a stunning list of contacts and, in some cases, defenders across the worlds of Hollywood movie-making, medical research, diplomacy, finance, politics and law.

From humble beginnings in Brooklyn's Coney Island as the son of a parks worker, Epstein, a college dropout, became a crackerjack trader on Wall Street - a maths genius who taught at a Manhattan private school until he was offered a job at Bear Stearns in 1976. He made lots of money for some of the firm's wealthy clients, and in 1981, he set out on his own, becoming a financial adviser to Leslie Wexner, founder of the Limited retail empire.

Before long, Epstein, now 66, was not just helping the rich get richer but was also building his own fortune - and flaunting it with a dazzling array of properties and perks. His house on Manhattan's Upper East Side was said to be the largest private home in the city, valued at US$77 million; his estate in Palm Beach, Florida, rivalled those of Mr Donald Trump and other billionaires.

Epstein used his money to construct a worldwide network of contacts. He donated large sums towards neuroscience research at Harvard and a California lab. He invited researchers to his New York house and talked maths with them over equations scrawled on a blackboard in his dining room. He flew former president Bill Clinton and actor Kevin Spacey to Africa to promote AIDS awareness. He was a member of the Trilateral Commission and the Council on Foreign Relations.

Many influential people liked to be around Epstein. He was smart, curious, fun. He wasn't shy about his money. When he renovated his New York house, he had the pavement in front of it heated so that any snow that fell would melt on contact. And he often travelled with young girls, which struck some as odd.

Epstein collected people almost as assiduously as he amassed dollars (he has often been referred to as a billionaire, and his lawyers claimed a decade ago that he was worth nearly enough to qualify for the term, but there's been no independent accounting of his fortune).

Epstein's black book of contacts - the printed phone directory that his Palm Beach butler, Alfredo Rodriguez, stole and that later was obtained by the FBI - includes Michael Jackson and Mick Jagger; more than a dozen aides to Clinton; other celebrities such as Alec Baldwin, Naomi Campbell and Jimmy Buffett; media titans such as Rupert Murdoch, Conrad Black and Michael Bloomberg; business magnates such as Richard Branson, Steve Forbes and Edgar Bronfman Jr; Kennedys, Rockefellers and Rothschilds; lords and ladies; ambassadors and senators. 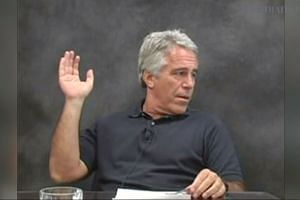 "Celebrities, politicians and Hollywood producers hang out with Epstein for one reason ... he's got all the toys," said Ms Conchita Sarnoff, executive director of the Alliance to Rescue Victims of Trafficking and author of a book on the Epstein case TrafficKing. "He has all the trappings - the yachts, the helicopter, the private island, the private jet."

Ms Sarnoff, who met Epstein in the early 1990s when a mutual friend showed him her photo and he came knocking at her door, said that he was "no party boy".

"I spent several New Year's at parties where he was, and he always left early and he never drank. But he had a purpose in being there: He was always focused on being seen with the right people."

The right people were often quite wealthy, and the markers of their riches included having multiple homes, fleets of vehicles and, as his phone book from the time before smartphones details, a remarkable array of phone numbers. For example, Epstein's primary client, Mr Wexner, whose holdings included Victoria's Secret and Abercrombie & Fitch, is listed with 25 car phones - ways to reach him in his various Mercedes, Range Rovers, Jeeps, Porsches and a Lincoln Town Car. (Mr Wexner has said he severed ties with Epstein after allegations of sexual misdeeds surfaced more than a decade ago.)

Epstein was also connected in Hollywood, where producers told Ms Sarnoff that although his story was a natural basis for a movie, no one had ever moved forward on such a project because Epstein was a quiet investor in a number of major Hollywood films. A producer who spoke on the condition of anonymity to talk frankly about Epstein's role in the industry confirmed that he had invested in and advised some of the most prominent producers in the business.

Epstein also built relationships at Harvard. Although he never attended the university, he pledged a US$30 million gift in 2003 to set up a programme to use maths to study molecular biology, and he served on the board of the school's committee on Mind, Brain and Behaviour. He opened an office in Cambridge, Massachusetts, to be near some of his allies and interests at Harvard.

After Epstein was first charged with abusing women in 2006, Harvard said it would not return a US$6.5 million donation he had made to the university.

Epstein pleaded guilty in state court in Florida in 2007 to charges of soliciting a minor for prostitution, resolving allegations that he had molested numerous girls. He served 13 months in jail, though he was allowed out six days a week to work from his office in Palm Beach. He was also registered as a sex offender. On Monday (July 8), he pleaded not guilty to new federal sex trafficking charges in New York that accuse him of abusing dozens of underage girls in the early 2000s. He faces up to 45 years in prison if convicted.

At the time of Harvard's decision, several politicians who had received contributions from Epstein returned them, including then New Mexico Governor Bill Richardson and then New York Attorney General Eliot Spitzer.

Epstein developed relationships with politicians in New York, Florida and New Mexico, where he had a ranch he named Zorro. He also knew and spent time with two presidents, Mr Clinton and Mr Trump.

"Epstein surrounded himself with politicians to gain leverage," Ms Sarnoff said. "They gave him protection, credibility and social mobility."

If the black book is any guide to the proximity Epstein had to the many boldface names in its pages, then his relationship with Mr Trump was a significant one. Epstein listed 14 phone numbers for Mr Trump; his wife, Melania; his longtime personal assistant, Norma Foerderer; his houseman; and his security officer. Other Trumps in the book include the President's brother Robert and his wife, Blaine; the President's ex-wife Ivana; and their daughter, Ivanka.

There is no implication that most of the hundreds of people in the book were involved in or aware of Epstein's alleged abuse of young girls. Some people listed in the book have said they barely know Epstein.

But after federal agents obtained the list, Rodriguez, the butler, circled a few names in black and noted them as "witnesses".

They included people who worked at Epstein's Palm Beach estate and some other associates, including Mr Alan Dershowitz, a Harvard law professor, and Mr Trump, both of whom have denied any knowledge of Epstein's alleged sexual abuses.

Mr Trump banned Epstein from his Mar-a-Lago estate after a teenage girl who worked in the club's locker room was recruited to give Epstein a massage, according to Mr David Boies, an attorney for one of Epstein's alleged victims.

Flight logs show Mr Clinton travelling on Epstein's private Boeing 727 more than 20 times in the early 2000s, to destinations in Asia, Europe and Africa, and the former president described Epstein in 2002 as "a committed philanthropist with a keen sense of global markets and an in-depth knowledge of 21st century science. I especially appreciated his insights and generosity during the recent trip to Africa".

Mr Clinton reached that judgment after spending a month with Epstein on a trip to Africa to boost AIDS awareness, according to a letter that attorneys Gerald Lefcourt and Dershowitz wrote to federal prosecutors in defence of Epstein in 2007.

The letter, first reported in 2016 by Fox News, said Epstein was a founding donor to the Clinton Global Initiative. His name does not appear in public documents detailing the initiative's leadership.

Messages left for Clinton Foundation spokesmen were not returned on Tuesday, but Mr Clinton's representatives issued a statement saying that he "knows nothing about the terrible crimes" to which Epstein pleaded guilty in Florida and that Mr Clinton took "a total of four trips" on Epstein's plane, with Secret Service agents accompanying the former president each time. Some of those trips included multiple stops.

The phone list is also a guide to Epstein's globe-trotting lifestyle, with entries for his Paris apartment (along with his favourite restaurants, car service and nightclubs, as well as a long list of "massage" contacts, noted by first name only); his 40ha Caribbean island (including the helicopter service he used and a list of "massage" contacts); and a Manhattan property listed as "apt. for models".

Under "Massage" in the book's Florida section, there are phone numbers for 109 women, each listed by first name only, except for one who is identified as "Janine (red head)".

Mr Alexander Acosta, the current labour secretary, was US attorney in Miami in 2007 and cut a non-prosecution deal that scrapped a federal indictment of Epstein; Mr Acosta called the defence team "an army of legal superstars" and said their "year-long assault" on prosecutors led him to back away from pressing federal charges against Epstein.

That legal battle began on a spring day in 2005, when a Palm Beach woman called the police to report that a rich man in a waterfront mansion had sexually abused her stepdaughter, who was 14.

Yet even as Palm Beach police detectives pressed their investigation, and through years of legal wrangling over whether and how Epstein would be punished for his alleged abuses, many powerful people continued to defend him or minimise his acts, as they had for many years.

In 2002, when a writer described Epstein's passion for young girls in a piece submitted to Vanity Fair magazine, that material was removed from the story, according to the author, Ms Vicky Ward. The magazine's editor at the time, Mr Graydon Carter, has said that the story's reporting did not meet the publication's standards.

After Epstein donated US$100,000 to Ballet Florida to establish a fund for the dancers to get massages, the ballet company's marketing director said the "massage and therapy fund is excruciatingly important to us", according to an account in New York magazine in 2007.

Some who had seen Epstein with young girls referred to his "peccadilloes", and some who knew that teens were often guests at his Caribbean island estate would say they didn't know that the girls were underage.

"When you have a lot of money, people act differently," Ms Sarnoff said. "They think they're above the law. And they're constantly worried about their money. Epstein made them think he could build their fortunes, and they protected him."