WASHINGTON (NYTIMES) - The author of a scathing new book about President Donald Trump said on Friday (Jan 5) that the President's attempt to block its publication would not only help with sales but also would also confirm the book's key finding: Trump is unfit for office.

Speaking on the Today show, Michael Wolff, the author of Fire And Fury: Inside The Trump White House, called the administration's attempt to block the book "extraordinary" and dismissed the President's criticisms of him out of hand.

"My credibility is being questioned by a man who has less credibility than perhaps anyone who has ever walked on Earth at this point," Wolff said.

In a tweet late on Thursday, Trump claimed that he had not authorised Wolff's access to the White House (and in fact had turned him down) and that he had never spoken to the author for the book.

Wolff countered by saying that he had absolutely spoken to the President and had done so after the inauguration.

"Whether he realised it was an interview or not, I don't know, but it certainly was not off the record," he said.

He said that, cumulatively, he had spent about three hours with the President during the campaign and in the White House.

"What was I doing there if he didn't want me to be there?" he said.

Excerpts from Fire And Fury began to appear online earlier this week, leading to a break between Trump and his onetime chief strategist, Stephen K. Bannon, who is quoted in the book calling Donald Trump Jr's actions during the campaign "treasonous" and "unpatriotic" and insulting Ivanka Trump.

Wolff characterised the book as an investigation of what it was like to work with Trump. He wrote that the President's associates called him a "moron" and an "idiot," and almost unanimously described him as being "like a child".

"What they mean by that is he has a need for immediate gratification," Wolff said. "It's all about him."

Book that Donald Trump tried to block goes on sale

On Thursday, a lawyer for the President sent an 11-page letter to the book's publisher, Henry Holt and Co, saying that it included false statements about the President that "give rise to claims of libel".

In reaction, the publisher moved up the release date.

Originally scheduled for a Tuesday debut, Fire And Fury was made available early on Friday.

"We see Fire And Fury as an extraordinary contribution to our national discourse and are proceeding with the publication of the book," the publisher said in a statement.

The White House has characterised the book as a "complete fantasy" full of "tabloid gossip," but it is not only the administration that has questioned Wolff's reporting. Some journalists have also expressed scepticism and pointed to past criticism of Wolff's work.

In 2004, The New Republic said the scenes in his columns "aren't re-created so much as created - springing from Wolff's imagination rather than from actual knowledge of events." 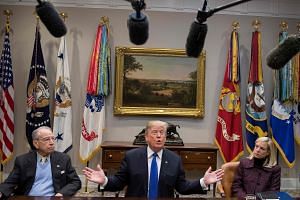 Others have said that the book, while filled with new and lurid details, corroborates previous reporting about the Trump White House.

Writing in The Atlantic on Thursday, James Fallows, a former Carter administration official and prominent critic of Trump, called the book's details "unforgettable and potentially historic".

"We'll see how many of them fully stand up, and in what particulars, but even at a heavy discount, it's a remarkable tale," he said.

Wolff chose to sidestep broader questions about his credibility on Today, claiming that he had written "millions" of words in his career and had never received a correction.

Instead, he kept his attention fixed on a president whose opposition to his book has only heightened its profile.

Asked how he felt about the President's attempt to keep the book off shelves, Wolff quipped, "Where do I send the box of chocolates?"