UNITED NATIONS (AFP) - Australian Prime Minister Scott Morrison used his UN speech on Wednesday (Sept 25) to slam critics of his country's climate record and to suggest Swedish teen Greta Thunberg was being exploited by others for ulterior motives.

"Australia is doing our bit on climate change, and we reject any suggestion to the contrary," said Mr Morrison, who as his country's treasurer famously brought a lump of coal to Australia's parliament to taunt the opposition over its commitment to renewable energy.

"We are successfully balancing our global responsibilities with sensible and practical policies to secure our environmental and our economic future," he added.

Mr Morrison charged that critics on climate change "willingly overlook or perhaps ignore our achievements as the facts simply don't fit the narrative they wish to project about our contribution."

He noted that Australia is responsible for only 1.3 perc ent of global emissions, and that he had passed an A$3.5 billion (S$3.26 billion) climate solutions plan.

The prime minister added that his country would meet its Paris Accord commitments to reduce greenhouse gas emissions by 26 to 28 per cent below 2005 levels by 2030. 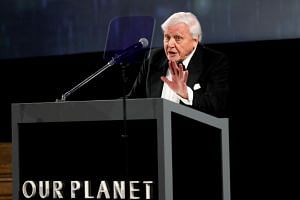 'We are failing': Greta Thunberg is right, world leaders say of lack in climate change fight

He also implied that Swedish teen Greta Thunberg, who accused world leaders of betraying her generation in a speech two days earlier, was being manipulated.

Mr Morrison said he received a great deal of letters from youngsters worried about the future, and that: "We must respect and harness the passion and aspiration of our younger generations.

"And we must guard against others who would seek to compound, or worse baselessly exploit, their anxiety for other agendas."

Mr Morrison's bullish assessments of his country's efforts to tackle climate catastrophe are not shared by environmentalists.

With a population of around 25 million, Australia was the 15th biggest carbon dioxide emitter in 2016, and was second highest behind Saudi Arabia in emissions per capita, according to International Energy Agency data.

One of the world's biggest goal producers, its self-set Paris goals are rated by the World Resources Institute as "insufficient" and not consistent with holding long-term warming to under 2 deg C, let alone 1.5 deg C needed to avert climate catastrophe.

Earlier this week, veteran conservationist David Attenborough took aim at Mr Morrison for not giving a "damn" about coal emissions and his lack of action on climate change.

In his speech, Mr Morrison also called the Great Barrier Reef "one of the world's most pristine areas of natural beauty" and encouraged tourists to visit, adding it remained "vibrant and resilient."