Their population till 2019 surged by 81%, but recent polls show many face discrimination

Asian Americans were the fastest-growing racial or ethnic group in the United States from 2000 to 2019, with a population projected to pass 35 million by 2060, the Pew Research Centre has found, based on analysis of US Census Bureau data.

The Asian population in the US grew 81 per cent during that period, from roughly 10.5 million to a record 18.9 million, according to Pew's analysis.

Hispanics saw the second-fastest population growth between 2000 and 2019, followed by the native Hawaiians and Pacific Islanders, at 70 per cent and 61 per cent, respectively.

The nation's black population also grew during this period, albeit at a slower rate of 20 per cent, Pew said.

There was virtually no change in the white population.

The US is getting more diverse.

Last July, a Brookings Institution analysis of census data showed that America's white population share declined 10 percentage points between 1980 and 2000, and by 2019, nearly 9 more percentage points, to 60.1 per cent.

By around 2045, white people will themselves be a minority.

Racial anxiety underlies much of the political tension in the US.

A study of 2016 election voter preferences by academics John Sides of George Washington University, Michael Tesler of the University of California at Irvine, and Lynn Vavreck of the University of California at Los Angeles, concluded that white voters' preference for Mr Donald Trump, who won by a landslide, was strongly related to concerns that minorities were taking jobs away from whites. 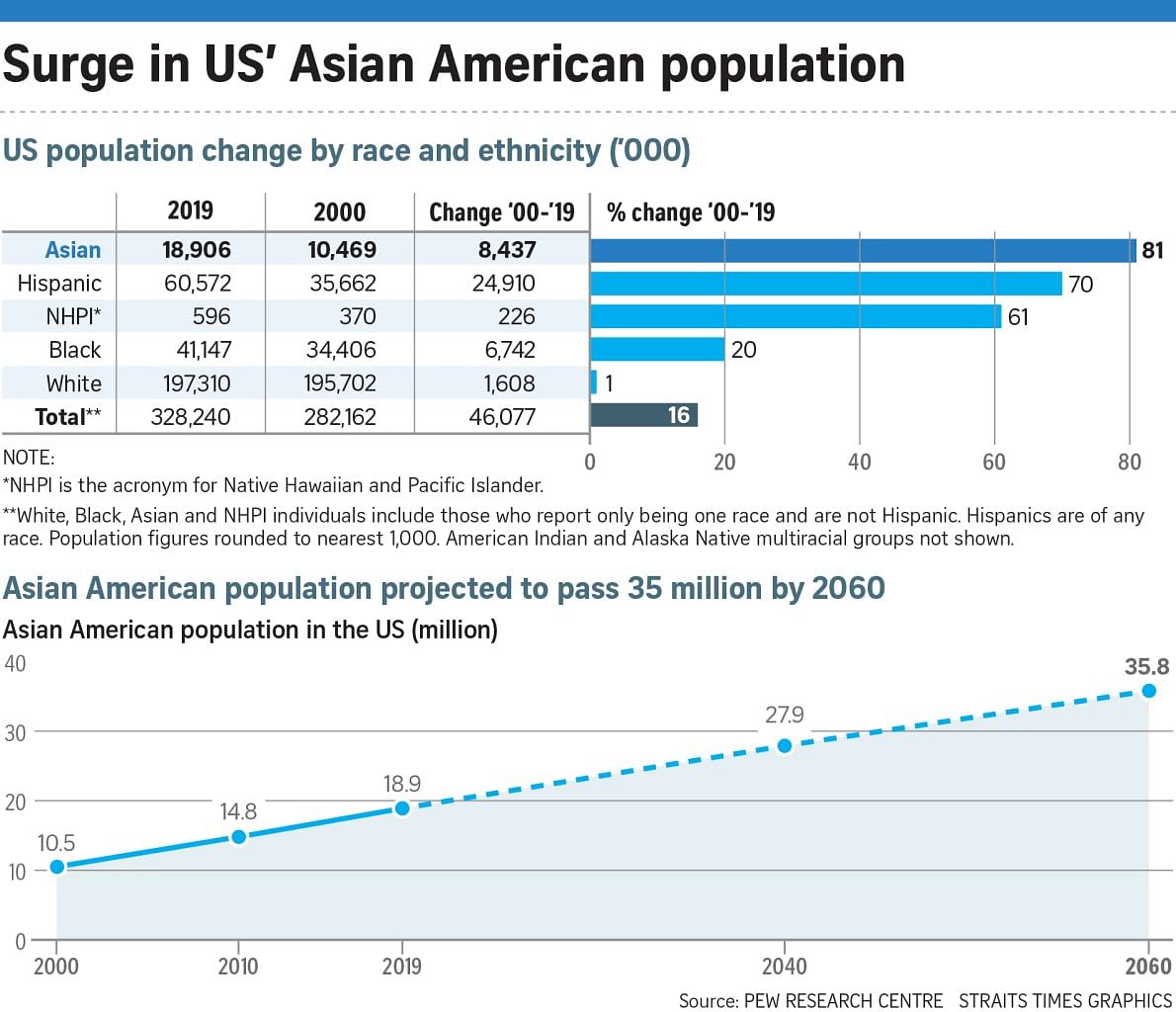 Pew Research's analysis of the Asian American demographic comes amid a documented rise in incidents of abuse and hate against Asian Americans that prompted condemnation from President Joe Biden last month.

"Too many Asian Americans have been... attacked, blamed, scapegoated and harassed," the President said.

"Hate and violence often hide in plain sight. And it's often met with silence.

"That's been true throughout our history, but that has to change - because our silence is complicity.

A separate Pew Research Centre survey conducted early last month - before the fatal shooting of six Asian women and two other people in the Atlanta area on March 16 - found that 70 per cent of Americans believe there is discrimination against Asian people.

And in a survey last June, 31 per cent of Asians reported they had been the subject of slurs or jokes since the Covid-19 outbreak began, and 26 per cent said they had feared someone might threaten or physically attack them because of their race or ethnicity, Pew said.

"The recent violence against Asian Americans is not a new problem," Ms Gloria Lim Steil, a Korean American who lectures in literary and critical studies at the Pratt Institute, told The Straits Times.

"It's a continuation, albeit a ratcheting up, of such violence going back to the mid-19th century."

Although Asian Americans have been part of the fabric of America since the 1850s, their history is barely known to most Americans.

Ms Steil said: "Asians are not a monolith. Grouping all Asians together, dismissing the enormous diversity of the Asian diaspora, is part of the problem.

"Chinese are as different from Koreans and Filipinos as Brits are from French and Ukrainians."

She added: "When the pandemic hit, Trump's rhetoric exacerbated this perpetual prejudice.

"People started seeing Asian Americans as foreigners and targeted them."

Special police squads have been formed in some places to curb attacks on Asians.

Volunteers are patrolling Chinatowns in California.

In New York City last week, on an escalator entering Penn Station in the heart of Manhattan, an undercover police officer of Asian descent was verbally abused by 35-year-old Juvian Rodriguez, who said "go back to China before you end up in the (expletive) graveyard", and then threatened to stab him in the face.

Surge in US' Asian American population

A version of this article appeared in the print edition of The Straits Times on April 14, 2021, with the headline 'Asian Americans fastest-growing racial group in US in past 20 years'. Subscribe
Topics:
More
Whatsapp Linkedin FB Messenger Telegram Reddit WeChat Pinterest Print Purchase Article Copy permalink