WASHINGTON (NYTIMES) - US President Donald Trump is cheerleading his way past the economic warning signs that have rattled financial markets and unnerved economists, insisting that the United States has an advantage in a crucial first round of trade negotiations beginning Monday (Jan 7) in Beijing.

It helps his case that the Labour Department published a jobs report for December that soared past expectations.

"China's not doing very well now," Trump said in a news conference at the White House, hours after the report came out Friday. "It puts us in a very strong position. We are doing very well."

Trump is correct about China's economy, which by several measures appears to be hobbled by US tariffs on US$250 billion worth of Chinese imports.

But the president's confidence about the domestic economy largely ignores what others see as looming threats, including damage from a protracted federal government shutdown, the waning effects of Trump's US$1.5 trillion tax cut and contagion from China's pain to US companies, farmers and consumers, Friday's data notwithstanding.

Chinese officials appear set to offer a mix of concessions, including reducing some tariffs on US goods, as they try to defuse trade tensions before a March 2 deadline, when tariffs on US$200 billion worth of imports will increase to 25 per cent from 10 per cent.

A US delegation of mid-level trade officials will begin two days of talks with their counterparts Monday in Beijing, led by Jeffrey Gerrish, deputy US trade representative, and David Malpass, the Treasury Department's undersecretary for international affairs.

If the talks are constructive, a senior-level delegation of Chinese officials is expected to travel to Washington within a few weeks to meet with Robert Lighthizer, Trump's top trade negotiator, and Steven Mnuchin, the Treasury secretary.

Top administration officials are confident they are in a strong enough position to win significant changes, including an end to China's practice of forcing US companies to hand over intellectual property and an agreement to buy more agricultural and energy products from the United States.

While such concessions are possible, China trade experts say they are not likely to happen easily or quickly, given the structural and legal changes they would require.

That could ultimately set the stage for a protracted fight that goes beyond March 2 and hurts consumer spending, corporate profits and economic growth in America.

"The balance of leverage appeared to have shifted in favor of the US, with signs that China's economy was slowing down, but the stock market rout and concerns about a US growth slowdown have restored a more even balance between the two sides," said Eswar Prasad, a trade expert at Cornell University.

"Still, it will be tough sledding for the US and China to reach a deal that is acceptable to both sides." He added: "The best that can be hoped for is a cessation of further trade hostilities, with the trade sanctions already implemented by both sides likely to remain in place." 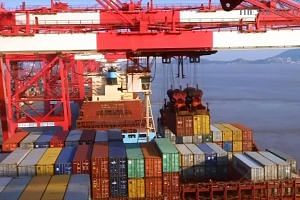 Mike Pillsbury, a China expert at the Hudson Institute who advises the Trump administration, warned that the negotiations would not be easy. He predicted that the Chinese would most likely try to make an offer that divides White House officials, satisfying the more moderate advisers like Mnuchin and Larry Kudlow, director of the National Economic Council, while frustrating Lighthizer and Peter Navarro, another senior adviser.

"If they are true to past history of negotiations, they will make a credible but minimal offer," Pillsbury said of Chinese leaders.

US companies like Apple and FedEx have already attributed lowered revenue estimates to the trade war with China. And many large US companies - like Caterpillar, General Motors and Boeing - view China's market as critical to future growth.

Kevin Hassett, chairman of the White House Council of Economic Advisers, acknowledged as much Thursday, when he told CNN that there are "a heck of a lot of US companies that have a lot of sales in China that are basically going to be watching their earnings be downgraded next year until we get a deal with China."

In an interview Friday, Hassett, buoyed by employers' adding 312,000 jobs to payrolls in December, tried to moderate those comments, saying that China's slowdown "is a problem for Europe, not the United States," because European countries export more to China than America does. He said that only 1.7 per cent of US corporate profits came from sales in China.

The potential for economic headwinds, including market concerns over a softening Chinese economy, prompted Jerome Powell, the Federal Reserve chairman, to say Friday that the Fed would be "patient" with policy decisions, like interest rate increases.

The government shutdown is also expected to exact some economic pain, with about 800,000 federal workers furloughed with no pay and economically essential services such as air travel, which depend on government workers, being crimped.

Standard & Poor's, the credit rating firm, estimated last month that shutting down a fourth of the government could shave US$1.2 billion off gross domestic product each week the government is closed.

Trump has suggested that he is willing to potentially let the government remain shuttered for more than a year.

Farmers who have been relying on an Agriculture Department program to mitigate the effect of the trade war through a special US$12 billion subsidy fund are now being left in the lurch.

According to a USDA spokesman, farmers who have already certified their 2018 production will receive payments under the Market Facilitation Programme, despite the lapse in federal funding. But farmers who have not done so must wait to certify until Farm Service Agency offices reopen when funding is restored.

Tax refunds will also not be issued during the shutdown, and taxpayers trying to determine their bill for 2018 will not be able to ask questions of the IRS.

"I understand that the IRS furloughed nearly 70,000 IRS employees (87.5 per cent of the workforce), ceased needed taxpayer services, and stopped issuing tax refunds during the government shutdown," Rep. Richard Neal, D-Mass., the chairman of the House Ways and Means Committee, wrote in a letter to Mnuchin on Friday. "These actions are causing undue hardship to American taxpayers and the IRS civil servants."

Analysts also view the gridlock between the White House and Democrats who now control the House of Representatives as a bad omen for other challenges that the government will face this year, such as lifting the government's borrowing limit.

US businesses are already beginning to struggle with the effects of one of Trump's first moves as president: his withdrawal from the Trans-Pacific Partnership, a multination trade agreement that includes several Asian countries.

That agreement is finally taking effect - without the United States - and the other 11 remaining countries are beginning to see the benefits of lower tariffs.

This is putting US businesses, such as the beef industry, at a competitive disadvantage to other countries, like Australia and Canada, when trying to sell beef in Japan.

Beef exports to Japan currently face a 38.5 per cent tariff, while tariffs for other countries that remained in the agreement have fallen to 27.5 per cent and will continue to decline in the coming years.

"We're going to start to see more incentives to buy from our competitors," said Kent Bacus, director of international trade and market access at the National Cattlemen's Beef Association. "We can't afford to delay the talks, we need them to move as quickly as possible."

Investors would love to see a quick resolution to the trade tensions as well.

Further drops could increase pressure on Trump - who famously bragged that trade wars are "easy to win" but who views the stock market as a barometer of his economic success - to settle for a quicker deal than he wants.

Still, Trump showed no sign of pressure on Sunday. "I think that things are going to happen" on a trade deal, Trump told reporters before boarding Marine One on his way to Camp David, where staff officials will discuss the shutdown, China and immigration.

He also celebrated the December jobs numbers, and mocked Wall Street analysts for being surprised by them. "It didn't shock me," Trump said. "I know what's going on."