Senator Dianne Feinstein, the committee's top Democrat, said she had received the information about Mr Kavanaugh from a person she declined to identify.

In a statement, Ms Feinstein did not specify the nature of the information.

The New York Times, citing two people familiar with the matter, reported that the information related to "possible sexual misconduct" involving Mr Kavanaugh and a woman when they both were in high school.

Ms Feinstein said the person who provided the information "strongly requested confidentiality, declined to come forward or press the matter further, and I have honoured that decision. I have, however, referred the matter to federal investigative authorities".

"Not until the eve of his confirmation has Senator Feinstein or anyone raised the spectre of new 'information' about him," Ms Kupec added. 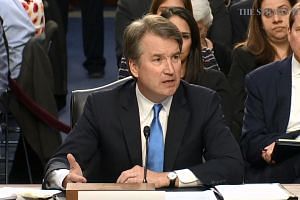 An advocate for women or a threat? Two views of Brett Kavanaugh as US hearings kick off

The White House did not immediately respond to a request for comment from Mr Kavanaugh on the allegation.

In party-line votes, the committee's Republicans rejected motions by Democratic senators seeking access to more documents relating to Mr Kavanaugh's service in the White House under Republican president George W. Bush more than a decade ago.

The Republican-led committee agreed to vote on the nomination next Thursday (Sept 20), with a final Senate confirmation vote likely by the end of the month.

"I don't understand the rush to judgment. I really do not," Ms Feinstein said.

Mr Kavanaugh, a conservative federal appeals court judge nominated by Mr Trump to the lifetime position on the high court, made no major missteps in two days of questioning by senators during his confirmation hearing last week.

Democrats have said they want to learn more about whether Mr Kavanaugh played a significant role in controversial policy debates in the Bush White House, including those relating to the treatment of detainees held after the Sept 11, 2001, attacks.

Mr Trump's fellow Republicans control the Senate by a narrow margin. With no sign yet of any Republicans planning to vote against Mr Kavanaugh, he seems poised to win confirmation despite Democratic opposition.