SPRINGFIELD, Missouri (WASHINGTON POST) - His wife told him it was a bad idea. His sister reminded him of what had happened in El Paso, Texas, less than a week earlier, when a gunman killed 22 people after opening fire at a shopping centre and Walmart.

But Dmitriy Andreychenko went ahead with his plan for a "social experiment," according to police. The 20-year-old used a mobile phone on Thursday (Aug 8) to film himself entering a Walmart in Springfield, Missouri, wearing body armour and carrying a loaded assault-style rifle. He said he wanted to test whether his Second Amendment rights would be honoured in a public area.

The subsequent scenes of panic were frighteningly familiar. In the week since two mass shootings in Texas and Ohio left 31 dead, moments including a backfiring motorcycle in Times Square to a falling sign in a Utah mall have triggered pandemonium.

On Tuesday, panicked customers ran from a Louisiana Walmart after men in an argument drew weapons, police said.

Andreychenko claimed he did not anticipate customers' reactions, the Springfield police statement says.

"This is Missouri," he told investigators, according to law enforcement. "I understand if we were somewhere else like New York or California, people would freak out."

Prosecutors on Friday charged Andreychenko, of Springfield, with making a terrorist threat, saying he recklessly disregarded the risk of causing a building evacuation by knowingly sowing fear in the wake of the El Paso mass shooting at the same retail chain. 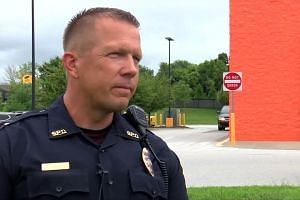 "Missouri protects the right of people to open carry a firearm, but that does not allow an individual to act in a reckless and criminal manner endangering other citizens," Greene County prosecuting attorney Dan Patterson said in a statement, likening Andreychenko's actions to raising a false fire alarm in a theatre.

Andreychenko's second-degree felony charge carries up to four years' imprisonment and a fine of as much as US$10,000 (S$13,000). He is being held on US$10,000 bond with the stipulation that he may not possess a firearm, according to the prosecutor.

The Washington Post could not immediately reach Andreychenko for comment. It is not clear whether he has a lawyer.

Andreychenko - who typically keeps a gun and vest in his car, according to his wife - arrived at Walmart just after 4pm on Thursday despite his family's warnings that his plan would provoke fear after the El Paso massacre, court documents say.

The man used his mobile phone to record himself entering the Walmart's front entrance and then headed toward the building's south-east corner, according to police. On his right hip was another weapon besides his AR-style rifle: a semiautomatic handgun loaded with one round in its chamber. Police say he had more than 100 rounds of ammunition.

He said he was recording in case somebody stopped him. He just wanted to shop, he said - and test Walmart's support for the right to bear arms.

Though he said he did not anticipate people's fearful response, Andreychenko knew about the El Paso and Dayton shootings and even said he brought the rifle and body armour to protect himself after a series of deadly attacks, police said.

Watching the armed man move down the aisles with a shopping cart, a store manager told an employee to pull the fire alarm to get people out of the store, believing Andreychenko would open fire. Andreychenko said he, too, left the store at that point, police said. Surveillance footage captures shoppers fleeing.

Officers took the man into custody "without incident" after a store patron - identified by The Associated Press as an off-duty firefighter - held Andreychenko at gunpoint outside the building, according to authorities.

While Andreychenko did not fire at anyone, according to police, a Battlefield City officer and another driver "suffered severe injuries" in a crash as the officer rushed to the scene with emergency lights and sirens. Both people were taken to the emergency room.

The debate over where guns are allowed to be carried is long and complex. Missouri is one of about 30 states that allow people to carry an openly held or concealed firearm without a permit, the AP reported. There have been numerous incidents where advocates of the Second Amendment have displayed weapons in the open. But such efforts have rarely triggered the level of panic seen in Springfield.

Walmart, which did not immediately respond to an inquiry from The Post, said in a statement Friday that Andreychenko would not longer be welcome in the chain's stores, according to the AP.

"This was a reckless act designed to scare people, disrupt our business and it put our associates and customers at risk," spokeswoman LeMia Jenkins told the AP. "We applaud the quick actions of our associates to evacuate customers from our store, and we're thankful no one was injured."

Springfield attorney Scott Pierson told local news outlet KY3 that Andreychenko might not have been arrested for the incident if it happened before the shootings last weekend in El Paso and Dayton.

"But because of those things happened, a reasonable person would be fearful of an individual walking in with a tactical vest and what looks like an assault rifle," he said.