COLUMBUS, OHIO (BLOOMBERG) - Retiring Republican Senator Jeff Flake rejected a suggestion by an official of his own party that there's fraud in the too-close-to-call race in Arizona to succeed him.

Democrat Kyrsten Sinema, who trailed through much of election night, has pulled out to a 30,310-vote edge over Republican Representative Martha McSally out of 2.1 ballots million cast statewide, according to the Arizona Secretary of State.

Mr Calvin Moore, a regional communications director for the National Republican Senate Committee, cited a Fox News story in a Saturday (Nov 10) tweet suggesting that a county election official was "destroying evidence to cook the books" for Ms Sinema.

Mr Flake responded to Mr Moore's tweet with a Twitter posting of his own on Sunday, saying, "There is no evidence of election officials 'cooking the books' in Arizona" and that "such careless language undermines confidence in our democratic institutions".

Asked about the comment, Republican Senator Cory Gardner of Colorado, who oversaw GOP election efforts in the Senate this cycle, didn't offer any example of destroying evidence.

He said he was worried about differences in how Arizona counties validated ballots.

"We just want to make sure that every vote counts and that every vote that was legally cast is counted and that you don't have different standards on signatures or verifications of those signatures that might not allow a vote to go forward in one part of the state that allows it to go forward in another part of the state," Mr Gardner said on CNN's State of the Union. 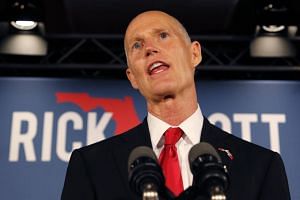 One of the major reasons it takes time to count ballots is that there are hundreds of thousands of early ballots dropped off at the polls on Election Day, Secretary of State Michele Reagan said in a Nov 8 statement.

The counties are working to verify the signatures on each ballot before it can be tabulated, she said.

"Everybody is working diligently to tabulate all of the election results in a manner that Arizonans can be proud of and, most importantly, trust the results," Ms Reagan said.

The races for Senate and governor in Florida are also too close to call and headed to a recount, amid similar allegations - including by President Donald Trump on Twitter on Saturday - that calls by Democrats to count every vote mask efforts to "steal" the election from Republican candidates who hold narrowing leads.