SAN JUAN (AFP) - US military and emergency relief teams were ramping up their aid efforts for Puerto Rico on Friday (Sept 29) amid growing criticism of the response to the hurricanes which ripped through the Caribbean island.

"This is not a good news story," San Juan Mayor Carmen Yulin Cruz told CNN on Friday following comments made the previous day by a top Trump administration official.

"This is a people-are-dying story." 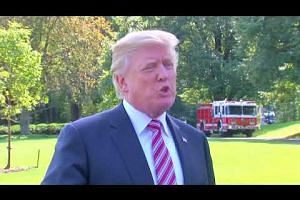 President Donald Trump, who will travel to the US territory early next week, meanwhile defended the response to the disaster on the island, which has been virtually without power, water and telecommunications since getting a twin walloping from hurricanes Irma and Maria.

Trump said the storms were of "historic and catastrophic severity" and a "massive federal mobilisation" was under way involving over 10,000 federal personnel and 5,000 members of the US military.

Elaine Duke, the acting Homeland Security secretary, said on Thursday she was "very satisfied" with how the relief effort was going so far and that it was "proceeding very well".

"I know it is really a good news story in terms of our ability to reach people and the limited number of deaths that have taken place in such a devastating hurricane," Duke said.

Her remarks sparked the angry response from the mayor of San Juan, the capital of the island of 3.4 million people.

"Maybe from where she's standing it's a good news story," Yulin Cruz said.

"When you're drinking from a creek it's not a good news story.

"If you don't have food for a baby, it's not a good news story.

"I'm sorry, but that really upsets me and frustrates me," Yulin Cruz said.

"I would ask her to come down here and visit the towns and then make a statement like that, which frankly, is an irresponsible statement."

Duke is to visit Puerto Rico on Friday.

Praised for the federal response to hurricanes in Texas and Florida, Trump has been on the defensive over his handling of the crisis in Puerto Rico, where he heads on Tuesday.

He lauded the relief effort on Friday and said it has been complicated by the fact that the US territory is an island.

"All appropriate departments of our government, from Homeland Security to Defense, are engaged fully in the disaster and the response and recovery effort," Trump said before delivering a speech in Washington to the National Association of Manufacturers.

"This is an island surrounded by water, big water, ocean water," he said.

"Virtually everything has been wiped out and we will have to really start all over again.

"We will not rest, however, until the people of Puerto Rico are safe," he said.

"We want them to be safe and sound and secure and we will be there every day until that happens."

Trump on Thursday eased shipping restrictions on Puerto Rico to make it easier to deliver fuel and water supplies to the island.

The US President waived for 10 days - in response to a request from Puerto Rico's governor - a 1920 law that restricts foreign-flagged ships from operating between US ports.

He also tapped a three-star general to head the Pentagon's response to the disaster.

As part of that effort, the USNS Comfort, a 1,000-bed hospital ship, was leaving the Virginia port of Norfolk on Friday for Puerto Rico.

Ricardo Ramos, the head of Puerto Rico's power authority, said on Friday that electricity has been restored to just 4.5 per cent of the population.

Ramos told CNN that about 4,000 utility workers were trying to fix the power grid and 1,000 more were expected to arrive over the weekend from the US mainland.

He said about 50 per cent of the island's residents now have running water.