SINGAPORE - Singaporean teenage blogger Amos Yee, who is seeking political asylum in the US, will remain in US custody until his final court hearing on March 7, after the US immigration authorities denied his release, his lawyers said.

Grossman Law, the law firm representing the 18-year-old in his US asylum bid, said in a media statement on Friday (Feb 3) the US Immigration and Customs Enforcement (ICE) had denied him humanitarian release on Thursday.

The decision by the US immigration authorities means that Amos, who has been detained since arriving in the US on Dec 16, will remain in custody until his final asylum hearing in March, the statement said.

According to the statement, the ICE had previously indicated that they intended to release Amos after his initial calendar hearing on Monday (Jan 30).

"That intention was based on the understanding, that Yee is neither violent, nor a flight risk, nor a threat to national security," the statement said. It added that the ICE's refusal to honour its previous agreement had not been based "on any new facts about Yee, but solely on President Trump's new directives", referring to the recent executive order on border security and immigration signed by US President Donald Trump last month.

The statement added that while the executive order had stated that the US Department of Homeland Security should ensure that asylum and parole are not "illegally exploited to prevent the removal of otherwise removable aliens", the ICE had interpreted the directive as the "authority to indefinitely detain all asylum seekers."

Amos, who arrived in Chicago on a tourist visa with a round-trip ticket from Singapore, has served two jail terms in Singapore for wounding religious feelings. 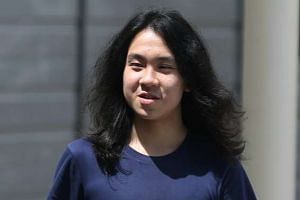 An Immigration Court judge in Illinois on Monday accepted the teenager's application for political asylum in the US, setting March 7 as the date for a full hearing.

In the 10-minute hearing, his lawyer, Ms Sandra Grossman, appeared in person before the judge while Amos appeared via video from the jail where he has been detained.