SAN FRANCISCO (AFP) - Amazon has grown from a humble beginning as an online bookseller to a colossus of the internet. It recently devoured Whole Foods Market, and is now biting into health care.

Here are some key facts about Amazon:

Incorporated in 1994 in Seattle, Washington, Amazon sold its first book in July 1995, with founder Jeff Bezos personally mailing packages to customers in the early days.

In 1999, Amazon went beyond books into gadgets, toys, electronics, software, home improvement and video games. A year later, it launched "Marketplace," allowing third parties to sell over the Amazon platform and has added new categories of merchandise and services over the years.

Amazon Web Services, launched in 2002 to be the online hosting platform for Amazon and its partners, has grown into one of the world's biggest cloud computing operators.

In 2005, the company launched Amazon Prime, a subscription service offering free delivery on many items and other benefits, representing an important element in the Amazon business model. No official figures are available, but some analysts say Prime has some 90 million subscribers in the US.

In 2007, Amazon Music launched as a platform for streaming songs, and later evolved into a cloud-based service. 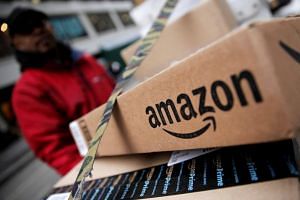 Amazon made its first move into grocery delivery in 2007 with Amazon Fresh. It is now beginning deliveries through Whole Foods.

A rival to Netflix in video, Amazon offered both DVD rentals and streaming for several years before rebranding its service as Instant Video and later as Prime Video. It now has its own studios producing original programs and films, and won an Academy Award last year for "Manchester by the Sea."

Amazon waded into the booming world of video game play as spectator sport with the billion-dollar buy of eSports streaming platform Twitch in 2014.

Amazon bought US grocery chain Whole Foods in a US$13.7 billion (S$18 billion) deal announced in June of last year.

Amazon started making Kindle e-readers in 2007 and expanded its hardware to tablets with the Kindle Fire in 2011. A Fire smartphone launched in 2014 flopped, but Amazon continued in hardware with its voice-activated Echo speakers, igniting a market for voice-commanded home assistants powered by artificial intelligence. Amazon also produces Fire TV devices.

The first Amazon physical retail store opened in Seattle in 2015. A cashierless "Amazon Go" shop opened in its home city early this year uses technology to automatically bill customers for items they pick from shelves.

Amazon has been pushing for drone delivery for several years, launching its first project in Britain in 2016, saying regulatory obstacles were too great in the United States. Amazon also has its own aircraft and local delivery operators that avoid third parties.

Globally, Amazon had some 540,000 employees as of the end of last year, boosting employment in warehouses even as it installed thousands of robots. It has research operations for artificial intelligence, robotics, ad technology and related fields.

Amazon gained a reputation delivering little or no profits in its early years as it invested for growth. But for 2017 it posted a profit of US$3 billion on US$178 billion in revenue.