NEW YORK - As the hackers behind the global ransomware attack demand payment in bitcoin, here is a look at the basics behind the electronic currency.

Why are hackers using bitcoin?

The digital currency bitcoin has emerged as a favourite tool for hackers demanding a ransom for a simple reason: You can start accepting bitcoin anywhere in the world without having to reveal your identity.

For criminals, this makes bitcoin much more attractive than systems like Western Union, which generally require customers to provide identification before opening an account and receiving transferred money.

Bitcoin is a digital token that can be sent electronically from one user to another, anywhere in the world.

Bitcoin is also the name of the payment network on which the bitcoin digital tokens move. (Some people differentiate between Bitcoin capitalised, as the token, and bitcoin lowercase, as the network.)

Because there is no central authority running bitcoin, no one has the authority to force new users to reveal their identities. The network was designed this way to create a currency and a financial network outside the control of any government or single company.

How do you buy and receive bitcoins?

There are companies in most countries that will sell you bitcoins in exchange for the local currency.

In the United States, a company called Coinbase will link to your bank account or credit card and then sell you the coins for US dollars. Opening an account with Coinbase is similar to opening a traditional bank or stock brokerage account, with lots of verification of your identity needed. 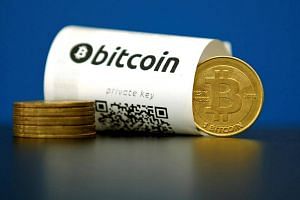 Few victims are paying hackers because using bitcoin is hard

For people who do not want to reveal their identities, there are services like LocalBitcoins that will connect local people who want to buy and sell bitcoins for cash, generally without any verification of identity required.

To start accepting bitcoins is even easier. One needs only to create a bitcoin address, which can be done anonymously by anyone with Internet access.

All bitcoin transactions are recorded on the network's public ledger, known as the blockchain.

Law enforcement or financial authorities can sometimes use the blockchain to track transactions among criminals. But as long as the criminals do not associate a real-world identity with their bitcoin address, they are generally safe.

Complicating matters further, there are increasingly sophisticated bitcoin laundering services, known as tumblers, which mix large quantities of transactions together in order to make it harder for the authorities to track the transactions.

Where it can get more difficult for hackers is when they want to convert the bitcoins they have received into a traditional national currency.

Most companies that convert bitcoins to dollars in the United States require that their customers provide identification. If a criminal registered with a company like that, it would be relatively easy for the police to track them down.

But there are many bitcoin exchanges outside the United States that do not require customers to register with a real-world identity.

LocalBitcoins also makes it easy to find someone in any city around the world who will meet you in person and pay cash for bitcoins without requiring any identification - a sort of Craigslist for bitcoin exchanges. It is also getting easier to buy goods online using bitcoins, without ever converting the digital currency into dollars or euros.

What's happening with the price of bitcoin?

Like gold, the price of bitcoin has always been driven by the scarcity of the digital tokens. When bitcoin was created in 2009, it was determined that only 21 million coins would ever be created.

Technology investors have purchased coins and pushed up the price out of a belief that the tokens and the system will be a sort of global digital currency and financial network for the future.

While real-world transactions have been slow to take off, bitcoin has continued to be popular for black market uses like ransomware and online drug markets like the Silk Road and its successors.

The corporate world has also taken interest in the technology that enables bitcoin, especially its decentralised financial network and the blockchain, the global ledger where all bitcoin transactions are recorded.

Many banks are making big bets that real-world financial transactions will one day be run on networks similar to bitcoin, which can operate more quickly, efficiently and securely than traditional financial networks.

There are now many competitors to bitcoin, like Ethereum, and their value has also been pushed up by growing interest in the bitcoin technology. But bitcoin has remained the largest so-called cryptocurrency and is generally the one that people use to buy and sell other cryptocurrencies.

What are the currency's origins?

Bitcoin was introduced in 2008 by a shadowy creator going by the name of Satoshi Nakamoto, who only communicated by e-mail and social messaging.

While several people have been identified as likely candidates to be Satoshi, as the creator is known in the world of bitcoin, not one has been confirmed. So the search for Satoshi has gone on.

Satoshi created the original rules of the bitcoin network and then released the software to the world in 2009.

Whether it is he, she or they, Satoshi largely disappeared from view two years later. Anyone can download and use the software, and Satoshi now has no more control over the network than anyone else using the software.