WASHINGTON - The age of "innocent engagement" with China is over, warns a new, 213-page report outlining China's increasingly assertive "sharp power" activity in the United States.

It also says that China's influence-seeking activities in the US are mirrored in different forms in many other countries, and includes summaries of the experiences of eight other countries - Singapore, Australia, New Zealand, Japan, Canada, France, Germany, and Britain.

In the US, powered by a new wave of Chinese money and ranging from penetrating educational institutions to politics to Chinese American community organisations and the media ecosystem, China seeks to exploit the openness of America's democratic society to "challenge, and sometimes even undermine, core American freedoms, norms, and laws", the report says.

A key goal is to cut off criticism of China, and support for Taiwan which Beijing considers illegitimate.

Thirty-two scholars and analysts participated in the extensively sourced Report of the Working Group on Chinese Influence Activities of the Hoover Institution in Sunnylands, California, and George Washington University, over the past 1½ years.

It came as US President Donald Trump headed to Argentina for a Group of 20 (G-20) meeting, where he is expected - though as yet not scheduled - to meet China's President Xi Jinping, in an encounter closely watched for signs of the direction of US-China relations amid a deepening trade war and wider strategic rivalry. 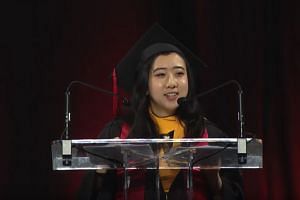 China, US must realise they need to accommodate each other to resolve trade war: PM Lee

The report acknowledges that normal public diplomacy, such as visitor programmes, cultural and educational exchanges, paid media inserts, and government lobbying are accepted methods used by many governments to project soft power.

But the ambition of Chinese activity in terms of the breadth, depth of investment of financial resources, and intensity, requires far greater scrutiny, because China is intervening more resourcefully and forcefully across a wider range of sectors than Russia, it states.

"By undertaking activities that have become more organically embedded in the pluralistic fabric of American life, it has gained a far wider and potentially longer-term impact," it warns.

Most of the apparently innocent activity is ultimately backed by the Chinese government.

Because of the pervasiveness of the party-state, many nominally independent actors - including Chinese civil society, academia, corporations, and even religious institutions - are ultimately beholden to the government and frequently pressured into service to advance state interests, the report says.

These and others are bolstered by state agencies such as the Ministry of Foreign Affairs and the Overseas Chinese Affairs Office of the State Council, which in March this year was merged into the United Front Work Department.

In China, all of the organisations involved in outreach to the overseas Chinese community are led by senior members of the Chinese Communist Party.

American entities should follow the money and the power, studying exactly who is behind or authorises the actions of Chinese entities, the report recommends.

"Because most PRC attempts to influence American opinion and practices occur at the local level, and because local media, universities, companies, and advocacy agencies are often involved in these efforts, knowingly and unknowingly, local leaders, just as much as national leaders, need an understanding of PRC goals and strategies," the report says, using the acronym for the People's Republic of China.

Also, among the Chinese American community, China has long sought to influence and even silence voices critical of China or supportive of Taiwan by dispatching personnel to the United States to pressure these individuals while also pressuring their relatives in China, the report says.

But the report emphasises that "it is essential that we not allow overseas Chinese as an ethnic group to fall under any kind indiscriminate cloud of suspicion".

Given the asymmetrical nature of US-China exchanges, it recommends that the US federal and state governments, should insist on reciprocity. For instance, citing "severe asymmetry in Sino-American scholarly exchange", it suggests Chinese scholars in America should be subjected to the same tight restrictions - or even have visas denied - as Americans in China.

"As a democratic society, we should tolerate no infringements - overt or covert - on our freedom of speech and freedom of analysis concerning China," the report says.

In the case study on Singapore, the report says that when the Republic took on the three-year stint as the Asean country coordinator in 2016, Chinese diplomats tried to convince Singapore to "explain" China's position on the South China Sea to other Asean countries, or to ensure that the issue was not raised in Asean forums, or, if raised, downplayed. Such demarches have been routine in all Asean countries for many years, the report says.

It also notes the incident when Singapore expelled Mr Huang Jing, an American academic born in China, for what it said was his covert effort to influence Singapore's foreign policy on behalf of an unnamed foreign government - widely believed to be China.

The report says Singapore is "unique" in that it is the only majority ethnic Chinese state outside of Greater China (Taiwan, Hong Kong and Macau) and that its rigorous standards of governance and zero tolerance for corruption make it "virtually impossible to bribe or openly suborn political leaders or opinion leaders".

The Straits Times has contacted Singapore's Ministry of Foreign Affairs for a comment.