UNITED NATIONS, United States (AFP) - One year after mobilising the international community against North Korea, Donald Trump is trying to force another arch enemy to the negotiating table by targeting Iran with a similar campaign of "maximum pressure".

But if North Korea's leader Kim Jong Un has seen his standing with the US president transformed in the 12 months since Trump's United Nations debut, the prospects of Hassan Rouhani undergoing a similar transformation appear far from clear.

In his debut speech before the UN General Assembly last September, Trump gave an initial airing to his "maximum pressure" philosophy as he railed both against Iran and North Korea.

But Kim, derided a year ago by Trump as "a little rocket man" who was on a "suicide mission" is now being hailed as a "terrific" leader by the US President after their historic summit in Singapore in June. A second get-together could be announced shortly.

According to one senior European diplomat, the Trump administration is convinced that its tough talk - allied with a massive programme of sanctions - forced the North Korean leadership to change course, even if doubts remain about how many concrete measures the North has actually taken towards ending its nuclear programme.

The Trump administration therefore plans to "do the same thing with Iran: hit hard and then negotiate from a position of strength", the diplomat added.

Much to the dismay of Washington's Western allies, Trump slammed the door in May on a deal that the US and European powers brokered with Iran back in 2015 that allowed for a lifting of sanctions in exchange for restrictions on Teheran's nuclear programme.

With the Iranian economy showing increasing signs of strain, the Trump administration is hoping that Teheran will have no option if it wants to survive and return to the negotiating table. 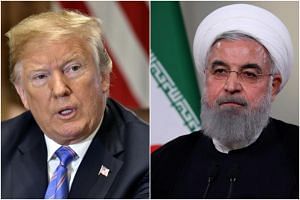 Iran in the spotlight as Trump, Rouhani set for UN clash 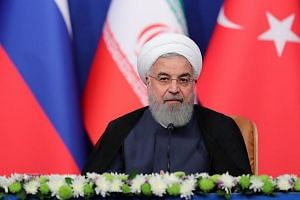 Behnam Ben Taleblu of the Washington-based Foundation for Defence of Democracies, whose organisation is known for its hard-line stance towards the regimes in both Pyongyang and Teheran, said there were clear parallels.

"It's hard not to mention Iran and North Korea in the same breath when talking about rogue regimes and nuclear non-proliferation," he told AFP.

"I believe that a 'maximum pressure' strategy towards both regimes is wise and warranted, but it will be challenging to conduct," added Ben Taleblu.

While both regimes have been accused of trying to develop nuclear weapons, Washington's complaints against Iran are more extensive - encouraged by its Sunni Arab allies who have long been hostile towards the mainly Shi'ite regime in Teheran.

Various administration officials have accused Teheran of destabilising large parts of the Middle East by becoming directly or indirectly involved through proxy militias in the conflicts in countries such as Syria, Yemen and Iraq.

"What we expect from Iran is massive changes in their behaviour. And until that happens, we will continue to exert what the President has called 'maximum pressure,'" Trump's national security adviser John Bolton told reporters in New York on Monday.

While Trump has not totally ruled out meeting Rouhani on the sidelines of the General Assembly, the Iranian President appears in no mood to meet his US counterpart and rejects any comparison with the situation with North Korea.

"The North Korean model cannot be a correct model, because we cannot draw such comparisons," Rouhani, who is to make his own address to the General Assembly on Tuesday, told the NBC network.

While US hardliners reject the President's reputation as a moderate, the Iranian government - with Rouhani resoundingly re-elected last year on a platform of better relations with the world - is far more multifaceted than North Korea where Kim's family has ruled with an iron fist for more than a half-century.

Thomas Countryman, who served in the State Department under Trump's predecessor Barack Obama, said that one of the reasons why Trump's strategy appears doomed to fail with Iran is that he has failed to work with key allies such as fellow members of the Security Council and has been instead too heavily guided by Teheran's enemies.

"The campaign of pressure against Iran is driven in part by Middle Eastern friends of the Trump administration who wish to draw the US into an active confrontation with Iran," said Countryman, who now heads the Arms Control Association pressure group.

"The US is burning up its traditional credibility on the Security Council," he added.