Washington's top diplomat was giving a speech on the value of respect to his staff that had been planned before Trump's reported outburst at a White House meeting on immigration reform.

Aides said the speech was written before Trump's comments, but his inclusive language marked a sharp contrast with the terms which senators say Trump used on Thursday.

"America at its birth was far from perfect and we're still an imperfect nation but the American people have never lost sight of our aspirational values of equality and liberty for all," Tillerson said.

"What makes out country great is that we are constantly striving to achieve our aspirations," he said in a speech ahead of the Martin Luther King day holiday weekend.

"This process involves each of us as individuals working on our own self improvement, recognising that our lives are enriched when we embrace the diversity in our nation and within the ranks of our own colleagues here at the State Department.

"By respecting our differences in life experiences and culture we set ourselves on a path to growth that then allows us to grow as an organisation," Tillerson said. 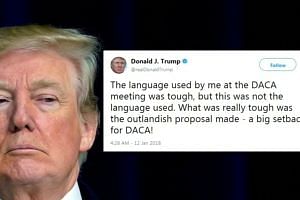 According to one witness, Democratic Senator Dick Durbin, Trump repeatedly used the term "s***hole" while arguing on Thursday that the United States should accept fewer immigrants from Africa, Haiti and El Salvador.

When reports of the exchanges first surfaced the White House chose not to deny them, but on Friday, with outrage spreading around the world, Trump tweeted "this was not the language used."

While Tillerson's prepared speech was not a deliberate response to Trump's comments, the top US diplomat has previously split from Trump over issues of racially-charged language.

In August, after Trump said that there had been some "good people" among a crowd of racist protesters, Tillerson said in a television interview that "the president speaks for himself".

Tillerson "would have given this speech regardless of what anyone had said," Assistant Secretary of State for Public Diplomacy Steve Goldstein said.

Tillerson also said that US diplomats and State Department and embassy staff around the world will receive training in how to prevent or deal with sexual harassment.