LOS ANGELES (BLOOMBERG) - Activision Blizzard, facing the threat of a boycott, reduced the punishment it meted out to a tournament player who voiced support for Hong Kong's pro-democracy demonstrators.

The company's Blizzard Entertainment division originally barred the player from events for a year and stripped him of some US$10,000 (S$13,700) in prize money. But it said at the end of the week that it would cut the ban to six months and pay his winnings, and that China had nothing to do with its decision.

The reversal followed an uproar from customers and even US lawmakers, who felt Blizzard was kowtowing to China by punishing the player. Some analysts worried the boycott might take a toll on a company that's already suffered recent upheaval.

"This represents a new risk," Cowen & Co. analyst Doug Creutz said in a note earlier this week. "though at present one that is very hard to evaluate." It all started when Chung Ng Wai, a gamer who goes by the name Blitzchung, wore a gas mask and chanted a pro-Hong Kong slogan in an interview after a tournament. Blitzchung plays Hearthstone, an online card game from Blizzard.

China considers support for the demonstrators an affront to the nation and its people, and Blizzard treated it as a grave offence. Blizzard said he violated its rules against an act that "brings you into public disrepute, offends a portion or group of the public, or otherwise damages Blizzard image." But customers and even some Blizzard workers felt the reaction was too extreme. In the furore that ensued, several employees staged a protest at its offices in Orange County, California. They covered up a plaque that read "Every Voice Matters" and held up umbrellas - a symbol of the Hong Kong protesters.

"In hindsight, our process wasn't adequate, and we reacted too quickly," J. Allen Brack, president of Blizzard Entertainment, said in the statement. Still, he added that "if this had been the opposing viewpoint delivered in the same divisive and deliberate way, we would have felt and acted the same." Fans calling for a boycott also complained that they had trouble cancelling their subscriptions to the company's games, which include the hit Overwatch. Among the gripes: that they had to show government identification to cancel and that other roadblocks were put in place.

Some of the cancellation complaints may have been overblown. The video-game site Polygon said the roadblocks probably stemmed from Blizzard's servers being overloaded, not a deliberate attempt to keep users from deleting their accounts.

Video-game companies have had to grapple more with free-speech issues in recent years, now that esports - gaming competitions that are broadcast to millions of fans - are such a big part of the industry. The maker of League of Legends, a division of Tencent, said this week that it won't let broadcasters discuss "sensitive" topics, including political or religious issues.

For Activision Blizzard, the boycott threat came at a particularly difficult time. The Santa Monica, California-based company has struggled to come up with fresh hits, and executive turnover is high. The heads of Activision Blizzard's three major divisions have been replaced over the past year, as was its chief financial officer, who quit. 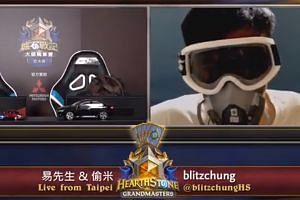 'No regrets' for Hong Kong gamer kicked out of eSports tournament

And the company is counting on customers embracing a mobile version of its hit shooting game Call of Duty, done in partnership with Tencent, which has also invested in Activision Blizzard.

The company also is preparing for Blizzcon, its big fan convention held in Anaheim, California, in early November. Attendees have threatened to come dressed as Winnie the Pooh, which has become a symbol of resistance against the Chinese government.

"We suspect that the decision to punish Blitzchung, which almost certainly had input from senior Activision management, was met with dismay by a meaningful portion of Blizzard's staff," Creutz said. "Investors are counting on a turnaround at Blizzard to reinvigorate growth, but if the internal culture is in turmoil, there is a lot of risk to that thesis." Blitzchung's punishment stood in stark contrast to how the NBA handled its China controversy this week. In that case, the Houston Rockets General Manager Daryl Morey tweeted his support for the Hong Kong protests, right before the league was due to play a couple of preseason games in China. But the league didn't punish Morey and has instead endured a backlash from Chinese authorities and sponsors there.

Activision's reaction also contrasted with that of Epic Games founder Tim Sweeney, the creator of Fortnite. Sweeney, whose company also has Tencent as a significant shareholder, said on Twitter this week that he supports free speech.

"Epic supports the rights of Fortnite players and creators to speak about politics and human rights," he said.