WASHINGTON (BLOOMBERG) – The woman who claims Supreme Court nominee Brett Kavanaugh sexual assaulted her decades ago has agreed to testify before a Senate panel, her lawyers said in an email to staff of the Senate Judiciary Committee.

But details of the presentation still need to be worked out.

Christine Blasey Ford “accepts the committee’s request to provide her first-hand knowledge of Brett Kavanaugh’s sexual misconduct next week,” Debra S. Katz and Lisa Banks wrote in the email, sent minutes before a deadline set by Republicans on the panel.

“We are hopeful we can reach agreement on details,” the lawyers wrote, requesting a time on Saturday to “continue our negotiations.”

If a hearing goes ahead, it would be a high-stakes public confrontation with parallels to the 1991 event when Anita Hill accused now-Supreme Court Justice Clarence Thomas of sexually harassing her when he was her supervisor at two federal agencies.

Thomas was confirmed after a hearing that infuriated many women who believed the all-male committee mistreated Hill.

Ford says Kavanaugh sexually assaulted her at a party during the early 1980s, when both were high school students in suburban Washington DC, a claim Kavanaugh strongly denies. Grassley had initially announced a hearing for Monday with Kavanaugh and Ford as witnesses, but Ford’s lawyers said she couldn’t appear that soon.

In Saturday’s email, Katz and Banks said many aspects of the proposal made by the Senate panel “are fundamentally inconsistent with the committee’s promise of a fair, impartial investigation into her allegations, and we are disappointed with the leaks and the bullying that have tainted the process.”

After days of restraint by the president, Trump attacked Ford’s credibility on Twitter Friday, saying she should have filed charges decades ago if the alleged attack was “as bad as she says.”

The president’s comments infuriated Democrats and risked further alienating women voters ahead of the Nov 6 election, in which Democrats have a chance to win control of the House and perhaps the Senate.

On Twitter, the hashtag #WhyIDidntReport quickly trended among women and men who said they hadn’t reported instances of assault.

Senate Republicans hope to confirm Kavanaugh before the Supreme Court begins its new term on Oct. 1. Senate Majority Leader Mitch McConnell of Kentucky expressed confidence to a gathering of conservatives in Washington that Kavanaugh will be confirmed.

“In the very near future, Judge Kavanaugh will be on the Supreme Court,” McConnell said at the Values Voter Summit on Friday. “Keep the faith, don’t get rattled by any of this." 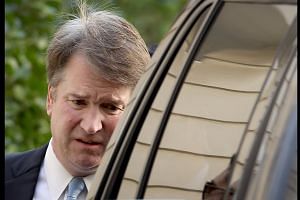 An advocate for women or a threat? Two views of Brett Kavanaugh as US hearings kick off

Trump’s tweet on Friday said, “I have no doubt that, if the attack on Dr Ford was as bad as she says, charges would have been immediately filed with local Law Enforcement Authorities by either her or her loving parents. I ask that she bring those filings forward so that we can learn date, time, and place!”

Ford, a California college professor, has said she didn’t tell anyone about the alleged attack at the time, in part because she didn’t want to tell her parents about underage drinking at a party where she said it occurred.

Kavanaugh appeared on a likely path to confirmation in a Senate controlled by the GOP 51-49 until Ford’s allegation came to light Sept 13 when top Senate Judiciary Democrat Dianne Feinstein said she told the FBI about unspecified information she received in July about the nominee. Ford revealed her identity and details of the claim days later in an interview with the Washington Post.

After Grassley set a hearing for Monday, Democrats demanded a delay to allow time for the FBI to investigate Ford’s claim. They also sought testimony from additional witnesses, including Kavanaugh’s classmate Mark Judge, who Ford says was in the room during the alleged attack. Judge said he doesn’t remember any such incident.

Grassley and Senate Republican leaders were gearing up to muscle Kavanaugh’s confirmation through without hearing from the accuser, until her lawyers on Thursday began negotiations for the hearing.

Kavanaugh’s confirmation appears to turn mostly on the support or opposition of three Republican senators: Jeff Flake of Arizona, who is on the Judiciary panel that Republicans control 11-10; Susan Collins of Maine, who is pro-choice; and Lisa Murkowski of Alaska, who also is pro-choice and comes from a state where the governor and lieutenant governor oppose Kavanaugh’s confirmation.

Ford says that Kavanaugh was drunk at a house party in about 1982, and that he pulled her into a bedroom then pinned her down on a bed, tried to remove her clothes and put his hand over her mouth to stop her from screaming.

She said she was able to escape, but the Washington Post reported that she described the episode to a therapist in 2013 as a “rape attempt.”

Kavanaugh said in a letter to Grassley on Thursday, “Since the moment I first heard this allegation, I have categorically and unequivocally denied it. I remain committed to defending my integrity.”

Vice-President Mike Pence backed Kavanaugh in a speech at the Values Voter Summit on Saturday, praising the nominee as a man of integrity with impeccable credentials.

“The way some Democrats have conducted themselves during this process is a disgrace and a disservice to the Senate and the American people,” Pence said.