SINGAPORE - The world is moving towards an era of shifting coalitions, one in which the global agenda is determined by networks of countries interested in specific issues rather than one where established alliances of global powers call the shots.

While the past decade has been marked by a void in global leadership, one that American foreign policy expert Ian Bremmer has coined the G-Zero era, the future could see variable networks of countries emerging to rally around their common interests without being governed by a permanent set of rules.

The Straits Times editor Warren Fernandez offered his take on what he called a "G-X" geopolitical landscape during a Facebook Live session with Mr Bremmer in New York on Thursday (March 21), held to coincide with the launch of a new content-sharing partnership this week between The Straits Times and Mr Bremmer's GZERO Media. GZERO Media is a subsidiary of the US-based political risk research firm Eurasia Group, which Mr Bremmer also founded.

Referencing Mr Bremmer's G-Zero theory, Mr Fernandez raised the example of how Japan took the lead to salvage the landmark Trans-Pacific Partnership trade deal that was in peril after US President Donald Trump's administration pulled out of the trade talks in 2017.

"Just as you saw in the TPP, everybody thought it was dead in the water, but then Japan stepped up and took leadership and we got TPP-11," Mr Fernandez said, referring to the revamped pact known as the Comprehensive and Progressive Agreement for Trans-Pacific Partnership.

Mr Fernandez also cited how countries such as Japan and India have been seeking to push their own influence against China's growing dominance in Asia.

"Japan is not going to accept playing a subsidiary role, nor is India and I think we see that emerging. The more China asserts itself, the more other countries are coming together, and forming a network as you saw in TPP," he said. 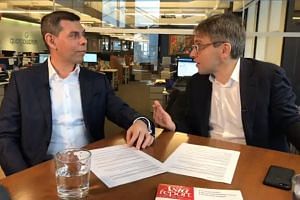 Agreeing with Mr Fernandez, Mr Bremmer said: "I think this is right, globally, you have a G-Zero but in the Western hemisphere, it's still mostly a G-1. In the Middle East it's a big G-X and all of the Xs hate each other. In Asia, it is becoming more G-1 like, but as you mentioned there are a whole bunch of countries that are going to be deeply unhappy about that."

In such a scenario, countries would have to weigh the hefty costs of decoupling from existing relationships in order to carve a way forward.

Mr Fernandez pointed to the battle between the world's two biggest economies - the US and China - and the fraught negotiations to end their trade war as an example of the challenge faced by duelling countries in such a landscape.

"We're all finding that it's impossible to decouple, consciously or otherwise, just as US-China trade is proving much harder for both sides to try and decouple. The cost of doing so is going to be so painful to everybody that it will force people to start thinking about how we make this partnership work," he added.

That scenario is also the reason Mr Bremmer believes that countries looking to advance their own interests would be forced to make deals.

"I think it's certainly true that today one of the reasons why you're likely to get a (trade) deal today between the US and China is because the cost of decoupling is so prohibitive. The Chinese economy is softening somewhat that nobody wants to take that pain. The Americans don't want the markets to get hit on the back of that and Trump doesn't want that too," he said.

The event, which took place at 1am Friday Singapore time (1pm EDT on Thursday), was hosted on Mr Bremmer's Facebook page and that of The Straits Times. Readers who tuned in were also able to pose their questions in the comments.

The content-sharing partnership between the two websites, which began on Wednesday, will enable ST readers to view GZERO videos and interviews on the ST website, while ST's wide-ranging coverage of Asia will be shared with GZERO's audience.