FAIRFAX, VIRGINIA (AP) - It was the odd-looking locker handles that caught their eye.

Investigators spent hours poring over graphic images of little boys changing in and out of their swimsuits at what looked like a YMCA. They were hunting for any clue to help them identify the location - and ultimately, the victims and the person who exploited them.

Then they noticed that the locker handles had unusual plastic hooks. They scrubbed the photos to remove the images of children, then sent the pictures to locker manufacturers. One of them recognised the lockers and said they had been installed at YMCAs. Eventually, investigators matched the photos to a YMCA in Sandusky, Ohio. That led to the suspect, a former Boy Scout leader.

These weren't FBI or local police, but investigators from the agency that's the poster child for President Donald Trump's polarising immigration policies: US Immigration and Customs Enforcement.

They look for unlikely clues that help them identify the children and bring their abusers to justice. In one case, it was the loud, persistent chirping of a bird. Another time, it was unusual playground equipment.

"We are looking at the hidden details, the things people aren't looking at," said Special Agent Erin Burke, the section chief.

The work of HSI agents has led to thousands of child exploitation-related arrests. But being part of ICE has taken a toll. Funding for HSI has fallen, as a greater share of ICE's budget is devoted to removing immigrants. And the association with ICE has created friction.

Some cities and police departments refuse to comply with ICE on immigration matters, like alerting them to criminal suspects wanted for crossing the border illegally. Sometimes that bleeds into the HSI investigators' work, too. Just having the e-mail end in "ice.dhs.gov" can cause problems.

"Ninety-nine per cent of what we do here has no immigration nexus," Ms Burke said. "But people have a hard time understanding this."

ICE's involvement in child pornography investigations dates back to when hard-copy images were traded over borders. Now it's all online.

The Internet has made it so investigators around the globe can't keep pace with the tens of millions of graphic materials available today. It's exploded in part thanks to cheaper online storage and easier encryption tools.

The Dark Web gives additional cover to perpetrators. It has made them bolder, their abuse more graphic and disturbing, the work of the investigators more difficult.

The lab was created in 2011 to look for clues within images to help find child victims. It has three analysts and one special agent. They work in a small windowless room in a nondescript office building in the Virginia suburbs outside Washington.

A sign on the door says in red bold letters: "Examination of graphic material in progress." Inside, new technology meets old: Fluorescent office lights are turned down and specialised blue lights glow. Giant, state-of-the-art computers with high-definition screens are set up alongside old police sketches of faces.

The cases come to them from local police, or international investigators who notice American victims. It can take two weeks, two days, two years to identify the children. Some they can't find. Those children haunt them.

In many cases, graphic images are accompanied by everyday shots of the child.

"They want to show they have access to a child," Ms Burke said. "So the 'before' images become a part of the story for them almost as much as the graphic images."

In one case, an analyst examined images he received from the National Centre for Missing and Exploited Children, a clearing house and reporting centre for issues on the prevention of child victimisation. 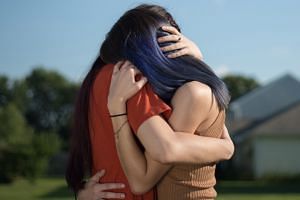 One photo showed, a girl, maybe four years old, from the back. She was scrambling atop a rock, her curly blonde hair in pig tails. The analyst Photoshopped the victim out and sent the photo of the rock and the surrounding foliage to a horticulture expert at the Smithsonian Museum of Natural History, who narrowed the location down to the southern US.

Next, the analyst looked at playground equipment in another "clean" image. He sent the photo to playground manufacturing companies and safety experts who could pinpoint where the equipment was installed, smack in the middle of a Houston neighbourhood.

They sent their research to Texas field agents, who went door-to-door, asking schools, neighbours, businesses, anyone, if they'd seen the little girl, and eventually found the victim - and the suspect.

The girl's father pleaded guilty last June and was sentenced to 35 years for exploitation. But by then, images of the girl had been widely circulated. They were found in at least 222 collections, officials said.

In another case, analysts heard strange bird chirping in an abuse video. They isolated the sound and sent it to an ornithologist who identified the bird and its migratory patterns. That led them to three suspects, the last of whom pleaded guilty last month. They are expected to be sentenced to a minimum of 15 years.

In the locker room case, a 39-year-old man pleaded guilty last month to sexual exploitation of a children and will be sentenced in January.

"The bad guys will always be smarter," Ms Burke said. "But that doesn't mean we don't have the tools, the expertise and the boots-on-the-ground hard work to make a dent."

Child abuse cases soar in Japan, as government takes heat for death of girl who begged for help

The lab is a small part part of HSI, which has 7,000 agents tasked with workplace enforcement, human trafficking investigations, child exploitation investigations, plus drugs and financial crime.

In the budget year that ended Sept 30, HSI agents and investigators initiated 4,224 child exploitation cases that resulted in 3,771 arrests and identification of 1,066 victims from. Some of those cases came from information gleaned through the victim identification lab.

The previous two budget years each saw about 4,000 investigations but lower arrests and fewer victims identified, according to the data.

The President's budget requests for HSI have declined over the past few years while requests for ICE's for immigration enforcement and removal operations money has increased, a reflection of Mr Trump's intense focus on reducing immigration. For the new 2020 budget year, it's up about to around US$1.7 billion (S$2.3 billion) - but in 2018 it was US$2.1 billion. Meanwhile, ICE's removal operations requests have increased from US$4 billion to US$5.1 billion for this budget year.

Ms Burke notes that working in the lab is "not for everyone". Coping can be tough. Some of the team members have children and have become wary of babysitters. They don't want to leave their children with anyone in a room, especially men.

But they all feel a sense of duty, drawn to the job for the simple fact of saving a child from harm.

"If I don't do it, who will? If not me, who will find these children?" said the analyst who uncovered the locker room link. He didn't want his name publicised out of concern for his investigative work.

The agency has therapists available to help lab staff. Analysts tell one another to step away if something is particularly horrifying. There's no maximum amount of time someone can work in the lab, but when someone suddenly realises they've had enough, they can transfer quickly to another department.

"It takes a special kind of person to do this work," Ms Burke said. "But when you save a child, when you get the call that a victim has been rescued, it makes everything worth it."