United States President Donald Trump's first week in office seems to be full of executive orders, but it is not really all that uncommon.

Every US president since Mr George Washington has used his executive order power in various ways to get things done.

Here are five things to know about executive orders:

1. What is an executive order? It is an official statement from the president about how the federal agencies he oversees are to use their resources. It falls under the broader umbrella of "executive actions" which also include presidential memorandums, proclamations and directives.

An executive order derives its power from Article II of the Constitution, which states: "The executive power shall be vested in a president of the United States of America." 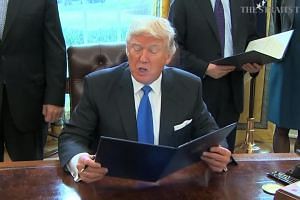 Executive orders can range from dramatic reverses of policy, like President Trump's approval for the construction of two controversial oil pipelines, to ordinary business such as President Barack Obama's instructions on half-day closing for government departments on Christmas Eve in 2015.

An executive order cannot be used to create a new law or appropriate funds from the US Treasury. It merely allows the president to instruct the government to act within confines already set by the Constitution and the Congress. For example, President Trump's executive order on a border wall with Mexico instructs the Department of Homeland Security to use available funds to begin construction.

2. Why do presidents issue them?

Executive orders do not require the approval of Congress to take effect but they still have the same legal weight. Most executive orders stem from a president's desire to bypass Congress. In the case of President Trump, he appears to be using executive orders to push through his controversial election pledges at speed, including the building of a border wall, repeal of Obamacare programme and immigration measures.

Sometimes the executive orders are signed during wartime or to avert a domestic crisis. In February 1942, President Franklin Roosevelt signed an executive order to create detention centres for about 120,000 Japanese Americans. In 1952, President Harry Truman issued an order that put the steel industry under the control of the government in a bid to avoid a strike. 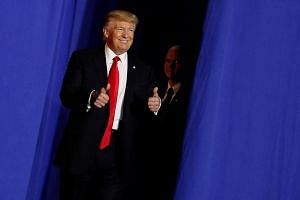 Timeline of executive orders by US President Donald Trump

3. Why are executive orders often controversial?

The opposition party often accuses the president of over-stepping his authority and acting like a dictator. Basically, they're arguing that he's changing the law rather than working within it.

This happened after Mr Obama signed executive orders exempting the children of illegal immigrants and parents of legal children from deportation. They were known as Deferred Action for Childhood Arrivals - or DACA - and Deferred Action for Parents of Americans and Lawful Permanent Residents - or DAPA. The plans shield about four million undocumented immigrants from deportation, but Republican governors and attorneys general sued, alleging that Mr Obama was essentially implementing immigration reform on his own - overstepping his authority. In June 2016, the Supreme Court deadlocked, leaving a federal judge's ruling blocking the programmes in place.

Questions have already surfaced about the legality of an early Trump executive order denying federal funding to "sanctuary cities" - cities such as New York, Los Angeles, San Francisco, Boston and Chicago which have some sort of protection to undocumented residents.

4. How can an executive order be challenged?

If Congress objects to an executive order, it can pass a law making the order difficult to fund. However, the president still has the power to strike this law down. In the case of President Trump, Congress is unlikely to object because both the Senate and House of Representatives are dominated by Republicans.

If the use of executive orders is regulated by the Constitution, orders can be challenged in the courts - with cases often making their way all the way up to the Supreme Court.

After President Truman issued an executive order to seize the nation's steel mills in 1952, steel companies sued and the order was later overruled by the Supreme Court as unconstitutional.

Another way an executive order can be undone is when a new president takes over.

5. How many executive orders were issued by previous presidents?

President Roosevelt issued the most executive orders, according to records at the National Archives. He issued 3,728 orders between 1933 and 1945, as the country dealt with the Great Depression and World War II.

The most active president in the post-World War II era was Mr Jimmy Carter, who averaged 80 orders per year during his four-year term.