President Donald Trump on Monday (Jan 23) made good his promise of pulling out of the Trans-Pacific Partnership (TPP) free trade pact by signing an executive order for the US to formally withdraw from the 12-nation agreement.

"We've been talking about this for a long time...great thing for the American workers what we just did," said Mr Trump, who had denounced the TPP as a "job killer" and a "rape" of American interests.

His decision is a blow to the pact, which took five years of negotiations before a deal was reached in 2015. The TPP, which Washington had signed but not ratified, was a pillar of former President Barack Obama’s pivot to Asia.

Here’s a quick guide on the TPP and the implications of the US withdrawal:

It is one of the most ambitious free trade agreements ever attempted and involves 12 countries - the US, Australia, Brunei, Canada, Chile, Japan, Malaysia, Mexico, New Zealand, Peru, Singapore and Vietnam.

It is aimed at deepening economic ties among these nations and is expected to substantially reduce tariffs, and even eliminate them in some cases, and help open up trade in goods and services. It is also expected to boost investment flows between the countries and further boost their economic growth. 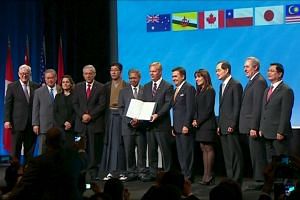 For the US, the TPP represents 40 per cent of world trade and a destination for over 60 per cent of US exports. Initial estimates claim the TPP would add US$305 billion (S$437 billion) in exports per year globally, with nearly half accounted for by an increase in US exports by an additional US$123.5 billion.

The TPP is also a strategic arrangement using free trade as an anchor. As China is not among the participants, the pact provides an economic counterweight to Beijing in the region by securing preferential access to Asia’s markets for US companies over Chinese firms.

2. WHAT MR TRUMP SAYS ABOUT IT

The new president, who said in his inauguration speech on Jan 20 that it would be “America first” on all issues from now on, has long opposed the TPP and other free trade deals , saying they take jobs away from Americans. He says he would protect American workers against competition from low-wage countries like Vietnam and Malaysia, also parties to the TPP deal.

He intends to “negotiate fair bilateral trade deals that bring jobs and industry back” and allow the US to quickly terminate the deals in 30 days “if somebody misbehaves.”

His trade stance mirrors a growing feeling among Americans that international trade deals have hurt the US job market. His fellow Republicans have long held the view that free trade is a must, but that mood has been changing.

Mr Trump’s position on free trade deals and his protectionist trade policies became lightning rods for voter anger in the industrial heartland states that swept the real estate tycoon to victory in the Nov 8, 2016 election.

3. WHAT TPP EXIT MEANS FOR AMERICA

US businesses will lose access to potential new markets. Automakers had hoped to see tariffs slashed in Asia, and farmers wanted the removal of trade taxes that currently prevent them from selling products, particularly poultry, overseas. Tech companies such as Google and mobile phone providers had sought to lessen regulations and gain entry into some of the countries involved in the deal.

Analysts say many of the manufacturing and low-skill jobs lost to other countries will not return to the US due to factors such as rising wages and new technology, contrary to what Mr Trump thinks.

The business community also feels that Mr Trump is detached from the reality that goods are sold cheaper in the US because they are made overseas; and that US companies also benefit from trade deals, making trillions of dollars selling their own products overseas.

Republican Senator John McCain has described US withdrawal as a “serious mistake that will have lasting consequences for America’s economy and our strategic position in the Asia-Pacific region.” He said the decision will “forfeit the opportunity to promote American exports, reduce trade barriers, open new markets, and protect American invention and innovation”

More significantly, it will “create an opening for China to rewrite the economic rules of the road at the expense of American workers. And it will send a troubling signal of American disengagement in the Asia-Pacific region at a time we can least afford it.”

Killing TPP “really undermines the United States” in the eyes of Asian allies, said Mr Ian Bremmer, president of the Eurasia group.“They put a lot of effort into it, and now they feel like they can’t rely on the United States.”

4. WHAT IT MEANS FOR CHINA

The US withdrawal creates a political and economic vacuum that China is eager to fill. Chinese Communist leaders are ramping up their globalisation efforts and championing the virtues of free trade. In an address to the World Economic Forum (WEF) at Davos on Jan 17, Chinese President Xi Jinping likened protectionism to “locking oneself in a dark room” and signaled that China would look to negotiate regional trade deals.

China is advocating for a 16-nation pact called the Regional Comprehensive Economic Partnership (RCEP) that excludes the US and lacks some of the environmental and labour protections Mr Obama negotiated into the TPP. The RECP would include South-east Asia countries, as well as Japan, South Korea, Australia, New Zealand and India.

Mr Xi and other Chinese leaders are also looking to fill the US leadership vacuum, taking advantage of Mr Trump’s protectionism to boost ties with traditional US allies like the Philippines and Malaysia.

“The US is now basically in a position where we had our horse, the Chinese had their horse – but our horse has been put out to pasture and is no longer running in the race,” said Mr Eric Altbach, vice-president at Albright Stonebridge Group in Washington and a former deputy assistant US Trade Representative for China Affairs. “It’s a giant gift to the Chinese because they now can pitch themselves as the driver of trade liberalisation.”

5. WHAT IT MEANS FOR ASIAN TPP MEMBERS

The development is seen as a blow to Japan, which has spent considerable political capital championing the pact. It was the last nation to join the pact, which would give its manufacturers tariff-free access to export markets in the US and other Asian countries, but would bring its automakers into competition with lower-wage countries like Mexico. Mr Abe became a strong enthusiast after making politically painful concessions on agricultural imports that the US had sought.

The withdrawal of the US also represents a loss of opportunities for Vietnam, Malaysia, Brunei and to a smaller extent, Singapore.

6. WHAT IT MEANS FOR SINGAPORE

Analysts say Singapore can still rely on the numerous FTAs that it has with most TPP members and Asean to soften the blow from a potential delay in the implementation of a Trump-shaped TPP. They believe the economic impact for Singapore would be limited given that it already has an open economy and extensive bilateral agreements in place – including an existing FTA with the US. 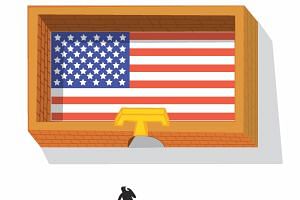 Asean, Singapore and the challenge of a protectionist America

The only TPP members that Singapore does not have FTAs with are Mexico and Canada, but the city state’s trade flows with these two countries are “very marginal”, says DBS economist Irvin Seah. “Other TPP members may want to pursue bilateral agreements that are easier to negotiate, and entail deeper commitments. That can keep the torch of global trade liberalisation alive,” he adds.

Nonetheless, Singapore is pressing ahead with ratification of the TPP, as the pact’s fostering of economic restructuring in other countries in the region would raise economic growth rates in Asia, and that would in turn benefit Singapore.

7. WHAT COULD HAPPEN NEXT

The US could renegotiate the pact or Asia could proceed with an alternative trade deal backed by China.
The US is unlikely to walk away from a trade pact that accounts for more than 40 per cent of the world’s GDP and leave the door open for the China-backed RCEP. “Much of China’s economic diplomacy is beneficial, but the hidden cost is that, at this stage, China is not committed to the open trading system that the US had sought to build, and will not likely promote open trade in services or reduction of non-tariff barriers such as subsidies,” says Mr Philip Jeyaretnam, senior counsel and regional chief executive at Singapore-based Dentons Rodyk.
In short, a regional trade pact that does not involve the US is not desirable.
If Washington returns to the negotiating table, it will probably try to extract a bigger concession, given Mr Trump’s election bluster over international trade. At the same time, the TPP signatories are not likely to bend over backwards for him, so protracted negotiation for a revised trade pact can be expected.
Countries like Australia, New Zealand and Japan hope to salvage the TPP by encouraging China and other Asian nations to join. Australia is leading a push to salvage the deal. Prime Minister Malcolm Turnbull said on Tuesday (Jan 24) that he had held discussions with Japanese Prime Minister Shinzo Abe, New Zealand Prime Minister Bill English and Singaporean Prime Minister Lee Hsien Loong about the possibility of proceeding with the TPP without the US.
SOURCE: THE STRAITS TIMES ARCHIVES, AFP, REUTERS, WASHINGTON POST, BLOOMBERG