NEW YORK (NYTIMES) - Three people who operated multi-million-dollar birth-tourism businesses in Southern California were arrested on Thursday (Jan 31) in the biggest federal criminal probe ever to target the thriving industry, in which pregnant women come to the United States to give birth so their children will become American citizens.

The businesses coached their clients to deceive US immigration officials and pay indigent rates at hospitals to deliver their babies, even though many of the clients were wealthy, investigators said. Some Chinese couples were charged as much as US$100,000 (S$135,000) for a birth-tourism package that included housing, nannies and shopping excursions to Gucci.

A tip sheet for customers, titled "Strategies to Maximise the Chance of Entry", recommended stating on a visa application that pregnant mothers intended to stay at the "five-star" hotel "Trump International Waikiki Beach", to convince immigration officials that they were well-to-do vacationers, not mothers travelling with the intention of giving birth on American soil, investigators said.

Grand jury indictments unsealed on Thursday in the US District Court in Los Angeles brought the total number of people charged in the schemes to 19, including both business operators and clients. But some of those targeted in the indictments are not presently in the US, investigators said.

The appeal of bearing an American child, long associated with immigrants who enter the country illegally, has spurred a birth-tourism industry that now caters to people from all over the world.

The industry is growing at a galloping pace, especially among Chinese nationals experiencing uncertainty over their country's long-term economic prospects, investigators said. The number of businesses in operation is undoubtedly much larger than the three agencies targeted in the latest indictments in the Los Angeles area, said Mr Mark Zito, assistant special agent in charge of Immigration and Customs Enforcement's Homeland Security Investigations in Los Angeles.

"We are talking about three takedowns in LA, when there are probably 300," Mr Zito said. "We have seen more businesses pop up. It is probably going stronger now than it was in 2015." 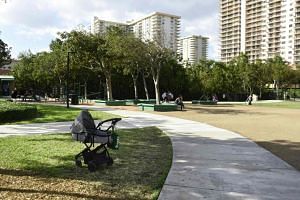 While the agencies charged in the investigation cater mainly to Chinese parents, Mr Zito said investigators have also found evidence of Russians heading to the Northeast and Nigerians travelling to Texas for the sole purpose of having American children. The Middle East is also a growing generator of birth tourism, investigators said.

"We are trying to quell this, but it is increasing. Other nations will start taking advantage of this," Mr Zito said.

The phenomenon of anchor babies has fuelled criticism from advocates of tougher immigration laws who are concerned that foreign adults are using their children to secure permanent residency in the US and from there, access to public benefits.

The indictments include an array of charges, including visa fraud, wire fraud and identity theft, against owners of the birth-tourism agencies that are accused of enabling thousands of Chinese women to come explicitly to give birth to American children.

"Statements by the operators of these birthing houses show contempt for the United States, while they were luring clients with the power and prestige of US citizenship for their children," Mr Nick Hanna, US attorney in Los Angeles, said in a statement.

"Some of the wealthy clients of these businesses also showed blatant contempt for the US by ignoring court orders directing them to stay in the country to assist with the investigation, and by skipping out on their unpaid hospital bills."

There are no official figures for how many babies are delivered to tourists on American soil. The Centre for Immigration Studies, a group that supports restricting immigration, puts the number at about 36,000 annually in a 2015 report.

"The fact that we have no idea of the scale of birth tourism is a problem in and of itself," said Ms Jessica Vaughan, director of policy studies at the centre in Washington.

"We should not tolerate an entire industry that encourages people to come here for the sole purpose of having a child who leaves with a US passport."

In recent years, the practice has prompted some lawmakers, who oppose children of unauthorised immigrants automatically becoming citizens, to propose repealing birthright citizenship, which is enshrined in the 14th Amendment of the Constitution.

President Donald Trump last year claimed erroneously that the US is the "only country in the world" that automatically confers citizenship to anyone born in the country. In fact, it is one of at least 30 countries that do so.

Still, the US has struggled to rein in birth tourism because it is not unlawful for foreigners who are pregnant to travel to the US or to have babies in the country.

"Birth tourism is a gray area of the law," said Ms Vaughan, who called "at the very least" for a revision of citizenship rights to prevent those who are in the country for only the first few weeks of their lives from retaining citizenship for life.

China, home to a burgeoning moneyed class that includes many who are eager for a foothold in the US, is the biggest market for the birth-tourism industry. The US offers educational opportunities for their children and a haven down the road in the event of political and economic instability in their home country.

The indictments allege that government officials, doctors and lawyers are among those travelling from China to the US to have children.

The businesses were dismantled after raids in 2015 by the special agents on several sites where the businesses housed pregnant women, in Los Angeles, San Bernardino and Orange counties. But it is not clear how long the three birth-tourism agencies had been operating.

Dongyuan Li, a resident of Irvine, California, who ran a business called "You Win USA", is accused in the indictment of renting about 20 units in a luxury apartment complex in Irvine under the names of people who did not occupy them, as part of an "illegal international birth tourism scheme".

Clients spent a couple months there before giving birth and were then replaced with newly arrived pregnant women, the charging document said.

On its website, Li's company touted the benefits of having an American child, including a "most attractive nationality"; "priority for jobs in US government, public companies and large corporations"; and the opportunity to immigrate to the US once that child becomes an adult and can sponsor a parent for a green card.

The business, which advertised on its website that it had handled 500 births, charged each client US$40,000 to US$80,000 for a range of services that included coaching on how to respond to questions at a visa interview, fill out forms and disguise the true motive for travel from Customs officers at the airport on arrival, according to the indictment.

One customer is alleged to have falsely stated on a visa application that she would be spending 12 days at the "Trump International Hotel" in Hawaii.

You Win USA recommended that clients fly from China to Hawaii and then connect on a domestic flight to Los Angeles, their destination, to clear passport control in Honolulu and avoid tougher scrutiny expected from officers in California.

It promised a refund to any customer who was not admitted into the country on arrival, according to the indictment.

The business arranged accommodation, prenatal care and shopping trips for the women. In some cases, the indictment said, it instructed clients to fabricate financial documents to enable them to obtain visa extensions, and it deposited money temporarily in their bank accounts.

Mr Zito, the special agent, said clients were advised to claim they lacked insurance, which entitled them to pay the indigent rate at whichever hospital they used to deliver their babies.

In some cases, he said, the women returned to China and cancelled their credit card to avoid paying even that rate, about US$4,000, which is a fraction of what it costs most women in the US to deliver a baby.

At the same time, he noted, "they would have nannies and buy things at Gucci and Hermes at South Coast Plaza", a high-end mall in Costa Mesa, California, where many shops have Mandarin-speaking attendants to help the numerous Chinese customers.

Li was arrested on Thursday, along with Michael Wei Yueh Liu, of Rancho Cucamonga, California, and Jing Dong, of Fontana, California, the operators of USA Happy Baby, another agency associated with birth tourism, according to the indictment.

Another indictment charges Wen Rui Deng, operator of a business based in Los Angeles called Star Baby Care, believed to be the largest birth-tourism operation in the country. There was no arrest in that case because Deng is believed to be in China, investigators said.