DES MOINES (AP) - Presidential candidates have swarmed Iowa's rolling landscape for more than a year, making their pitch to potential supporters on campuses, county fairgrounds and in high school gymnasiums. But three weeks before the caucuses usher in the Democratic contest, the battle for the state is wide open.

A cluster of candidates, including Senators Bernie Sanders of Vermont and Elizabeth Warren of Massachusetts, along with former Vice President Joe Biden and Pete Buttigieg, the former mayor of South Bend, Indiana, enter the final stretch with a plausible chance of winning Iowa's caucuses.

A poll released Friday (Jan 10) by The Des Moines Register and CNN found them all with similar levels of support.

For two decades, Iowa has had a solid record of backing the ultimate Democratic nominee. A clear victory in its caucuses next month could set the tone for the races that follow in New Hampshire, Nevada and South Carolina.

But an inconclusive result or one in which several candidates are bunched together near the top could preview a long, brutal fight ahead. Some Democrats fear the question of a nominee might not be resolved until the party convenes in Milwaukee this summer to formally declare its candidate to take on President Donald Trump.

The unusually fluid dynamic raises the stakes for the leading candidates heading into Tuesday's debate, which will be the final televised gathering for the White House hopefuls before the caucuses. Their closing arguments in Iowa could be complicated by Trump's impeachment trial, which would require senators in the race to return to Washington. And the fallout from Trump's surprise decision to launch a strike last week to kill a top Iranian general could steal attention that would otherwise centre on the presidential race.

It's against that backdrop that candidates must win over people like Barb Cameron, a 76-year-old who attended a recent Warren event in the river town of Burlington.

"I'm undecided," she said. "I want to vote for a woman. But, more than that, I want to vote for someone with real leadership capability." "I like Pete, though I don't know enough," Cameron added. "And I don't think Biden can beat Trump."

If other voters agree, Biden's candidacy could face steep headwinds in Iowa. The former vice president began as the early favourite, in large part because of a sense that he is best positioned to defeat Trump. If that falters, the central rationale for his campaign risks being undermined.

Biden faces a far more favourable climate in later contests, especially South Carolina, where support from black voters has given him a substantial lead over his rivals.

And the focus on global affairs after the Iranian conflict could lift Biden, who built a resume over decades in Washington as a leading voice on foreign policy. JoAnn Hardy, chair of the Cerro Gordo County Democrats in northern Iowa, said a shift in voter focus would be an advantage. 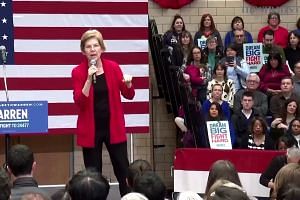 But even that prediction came with a caveat.

"I think there's a lot of support, but for most people it's not enthusiastic support," Hardy said. "It's like, we've gotta do what we've gotta do to beat Trump."

While Biden is positioning himself as a steady hand in the face of international instability, the Iranian episode also leaves an opening for Sanders to draw a sharp contrast with Biden over the Iraq War, which Sanders opposed.

The Vermont senator is drawing sharper contrasts with Biden as he tries to appeal to some of the white, working-class voters, particularly in rural areas, that Sanders' advisers believe may be open to his message of taking on the rich and powerful.

Without naming him, Sanders kept pressure on Biden Sunday, reminding a forum in Davenport that he opposed the 2002 authorisation for military force in Iraq.

"In 2002, I helped lead the effort against the war in Iraq, which turned out to be the worst foreign policy blunder in the modern history of America," Sanders said. "The war in Iraq was based on a series of lies."

Sanders' campaign volunteers have reportedly been instructed to tell voters that are leaning toward Warren that her supporters are "highly educated, more affluent people" and that she's failing to expand her support. Those tactics brought a rare broadside against the senator from Warren, who said Sunday that she was "disappointed" in Sanders and suggested he's too divisive to defeat Trump.

Still, Sanders' position in Iowa is improving and he's attracting large crowds. His campaign says he spoke to nearly 6,000 people across 16 events in the state earlier this month.

"I think they misgauged the trajectory of the race," she said. "I don't think they came out in force enough in our area soon enough, so now I feel like we're kind of playing catch-up" in organising.

Costello said she had complained to the Sanders campaign for months about the lack of resources in her area, and now she feels they're finally sending more staff and resources to help knock on doors.

Indeed, Sanders' campaign says they have one of the biggest teams in Iowa, with more than 250 staffers on the ground and 23 offices across the state. That significant staff footprint coupled with the consistently large crowds has Sanders' advisers privately predicting victory in Iowa.

Warren's campaign is still seen as one of the most seasoned and best-organised in the state, as she's had organisers holding intimate local events with potential caucusgoers across Iowa for nearly a year.

Her aides will only disclose that they have more than 100 paid staff and more than 20 offices in Iowa, but most operatives on the ground believe her team is nearly twice that, as Warren staffers are constantly seen at local party events and out knocking on doors. On a cold Sunday morning, with snow blanketing the ground, she turned out around 300 people to an elementary school gymnasium in Marshalltown.

There, she was introduced by former Housing Secretary Julian Castro, who endorsed her last week after exiting the presidential race. He made an electability pitch, arguing that Warren "can unify Democrats to beat Donald Trump".

Buttigieg has also assembled a robust statewide organisation that puts him in a strong position for someone who was virtually unknown nationally a year ago. He consistently draws larger crowds than his rivals who have been in politics for decades.

Since September, the 37-year-old Buttigieg - touting a message of generational change, civility and Midwestern pragmatism - has been drawing a significant share of first-time caucusgoers into his ranks, including about a third of the 50 caucus leaders who turned out in Ottumwa for caucus training Thursday evening.

Is Pete Buttigieg at 37 too young to be US president?

Despite the hopeful tone and intellectual depth, Buttigieg has struggled with some in his own generation looking for more overhaul in Washington than the moderate from Indiana espouses.

"I really like his temperament and his style," said Parthi Kandavel, a Des Moines middle school teacher who recently travelled to Burlington with his wife, Anu, to see Buttigieg.

"My concern is his commitment to addressing income inequality." And though Iowa's population is 90 percent white, Buttigieg's struggle to attract support from minority voters has crept into his Iowa campaign. During a rally Sunday in Des Moines, Black Lives Matter supporters interrupted Buttigieg, shouting and chanting, before being escorted out by police.

In another warning sign for Buttigieg, he dropped 9 percentage points from November in the Register/CNN Iowa poll.

Still, the final weeks of the caucus campaign are often marked by unpredictability: Candidate support is known to shift even in the final days before the caucuses, and the polling leader three weeks out is by no means assured a win.

That leaves room for an unexpected candidate to break ahead. Sen. Cory Booker is continuing to campaign feverishly in Iowa, and while his campaign leadership is seen as one of the strongest on the ground, he remains far behind his opponents in polling and staffing numbers.

It's Sen. Amy Klobuchar who has Iowa political operatives taking notice. In recent weeks, she's attracted growing crowds and a fundraising surge that helped her invest in her operation in Iowa. She now has more than 100 staffers on the ground, and 19 field offices across the state - fewer than most of the top-tier candidates, but a healthy infusion at a key time.

But it remains to be seen whether Klobuchar's late investment can compete with the seasoned staffers of campaigns like Warren's and even Booker's, which have been organising supporters for months in Iowa.

"Now, their challenge is how you take these people that are now seriously kicking Klobuchar's tires and turn them into precinct captains and have them help recruit other people for you," said veteran Iowa Democratic Party operative Jeff Link, who is unaffiliated with any campaign. "I think she can."