From an unlikely Republican election nominee to America's President-elect with a stunning upset victory that sent shockwaves around the world.

The meteoric rise of Mr Donald Trump in the political arena - despite his gaffes, scandals and misjudgements - has caught many by surprise and has earned him both criticisms and support.

Here are 10 things about the 70-year-old President-elect:

1.  He's the richest man ever to become US president, but the most frugal in terms of campaign spending

The tycoon is estimated to have a net worth of US$3.7 billion (S$5.2 billion) in 2016, according to Forbes. The next richest is US founding president George Washington at US$525 million. The latter owned a plantation in Virginia consisting of 3,240ha of prime farmland, while his wife Martha inherited significant property from her father.

In terms of campaign spending, however, he is quite possibly the most frugal of all winning candidates so far. Up to July, records from the Federal Election Commission showed he spent US$91 million on his campaign, less than half of Mrs Clinton's spending of US$275 million. Although he raised the spending in August  from US$18.5 million to US$30 million, the amount was still less than the US$50 million spent by Mrs Clinton.

2. He is said to have inherited many of his father's traits

He is fourth of five children born to New York real estate developer Fred Trump and Mary MacLeod Trump.  He is said to have inherited many of his father's characteristics but he rarely speaks about his family and his childhood growing up in Queens, New York. The few times he spoke about his father, it was only to the extent of calling him "very tough" and "very difficult".

The elder Trump was well-connected politically and was known for being good  at manipulating laws to his benefit without ever breaking them. He was tough with his children. When the younger Trump started to act up at age 12  - he apparently loved to fight - his father took him out of his cushy private school and enrolled him in the New York Military Academy.

3. His motto: "Winning isn't everything, it's the only thing"

It was at the military academy where the young  Trump gained his ruthless streak. On the wall of the locker room of the baseball team at the  academy was a quote from American football legend Vince Lombardi that particularly spoke to him: "Winning isn't everything, it's the only thing."

The emphasis on wining can be seen through much of his adult life. His tennis coach reportedly said Mr Trump tried to hit winners with every shot rather than bid his time. When his coach taught him to play more strategically, he quit. "I don't have the patience for it," he said. "When I changed my game, I lost interest. I like trying to hit winners all the time."

4. He started a business after graduation with a US$1 million loan from family

He went to Fordham University in New York and later transferred to the prestigious Wharton School of Finance in the University of Pennsylvania. After graduating in 1968 with a degree in economics, he went into real estate with a US$1 million loan from his father. He later joined the family business and took  over it completely in 1971. The burden of continuing the family business fell on him because his elder brother Fred chose to become a pilot.

5. From a successful property developer to a multi-business tycoon

After moving to Manhattan in 1971,  he built a vast network of influential contacts and  became involved in large building projects that not only brought in the money but also put him in the public spotlight. He transformed the family business from a successful, though  low-key, developer of apartments in Queens and Brooklyn, into a glitzy Manhattan brand that extends to not only real estate, but also food and beverage businesses, casinos, golf courses, airline, a controversial Trump University and even an ultimately failed line of steaks.

He is said to have listed involvement in more than 500 companies. In New York, 17 buildings - though he only owns a handful of them -  bear his name in large gold letters. These include  the Trump International Hotel, as well as  luxury condominiums like Trump Park Avenue and Trump Parc East. The crown jewel is the Trump Tower on the shopping street Fifth Avenue where the tycoon lives.

6. He fell to a low point when the real estate market declined in 1990s

He suffered huge losses during the downturn, with the Trump Organisation depending on loans to stay afloat. His financial troubles also stemmed from mismanagement of three Atlantic City casinos, his ill-fated foray into the airline business and his ill-timed purchase of the Plaza Hotel in Manhattan. But the businessman made a comeback within a decade, reversing what was reported as a nearly US$1 billion deficit.

That deficit became an election issue amid claims that he had used it to avoid paying taxes long after he had recovered financially. Tax experts hired by The New York Times to analyse Mr Trump's 1995 records said tax rules that are especially advantageous to wealthy filers would have enabled him to use his US$916 million loss to cancel out an equivalent amount of taxable income over an 18-year period.

Although his taxable income in subsequent years is unknown, a US$916 million loss in 1995 would have been large enough to wipe out more than US$50 million a year in taxable income over 18 years, according to the tax experts.

7. The star of "Apprentice" once said reality shows are for "the bottom feeders of society"

Before he hosted the hugely popular "Aprentice" on NBC, Mr Trump reportedly told friends that he didn't like the whole idea of reality TV. "That's for the bottom feeders of society," he said.

Then in 2002, the creator of reality show "Survivor" Mark Burnett approached Mr  Trump with  the idea of Apprentice -  which featured young go-getters vying to run one of his businesses. He liked the idea and even fired his agent after the latter said business shows don't go well on TV. His decision to take on the project and even host the weekly show proved to be the right one, as the show turned out to be a huge success and boasted his image.

It not only gave him the opportunity to promote his businesses, but also portrayed him as smart and decisive. In 2007, Mr Trump received his own Hollywood Walk of Fame star for his role in the show.

Mr Trump's emergence on the political scene may have felt a little like a bolt out of the blue, but the tycoon has actually had a three-decade long history of toying with the idea of a run, starting in 1987. Most had regarded the talk at the time as publicity stunt to drum up interest in his newly published book, "The Art of the Deal".

In 2000, he flirted with a presidential bid as a nominee for the Reform Party, supposedly with talk show host Oprah Winfrey as his running mate. He would hint again in every subsequent presidential election.

The coming out party of Mr Trump as a political figure took place in 2011 when he positioned himself as the strongest, most public voice of a movement known as "Birthers". He repeatedly publicly expressed doubts over whether President Barack Obama was born in the US and continued to do so even after the president released his birth certificate. He would only rescind those claims this year, when it was clear that his position was hurting his campaign among the black community.

9.  He stopped drinking alcohol after his elder brother's death

In his victory speech, Mr Trump praised his elder brother: "I also want to thank... my late brother Fred, great guy, fantastic guy."  His brother, who was an airline pilot, started drinking when he went to college and became so addicted that he had to give up his job. He died of alcohol addiction in 1981 at the age of 43.

Mr Trump said his brother, who would tell him "don't ever drink", could not take his own advice. The New York Times wrote in an article that  Mr Trump learnt by watching his brother "how bad choices could drag down even those who seemed destined to rise. Seeing his brother suffering led him to avoid ever trying alcohol or cigarettes".

10. He is married three times and has five children 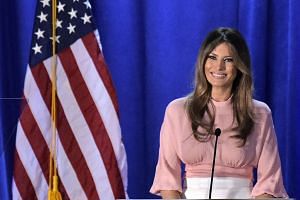 10 things about Melania Trump, the soon-to-be US First Lady

Mr Trump is a two-time divorcee who married his current wife Melania, 46, in 2005. She is an ex-model from a small town in Slovenia. He has five children, four of whom campaigned heavily for him during his bid for the White House.

The three oldest children he had with his first wife, Czech model Ivana Zelnickova - Donald Jr, 38, Ivanka, 35, and Eric, 32 - were a key part of his inner circle. All three, along with Mrs Trump and Tiffany, 23 - his only child with second wife, American actress Marla Maples - had taken to the stage to stump for him at the July Republican National Convention in Cleveland.

His three older children are seen by the public as poised and articulate - the polar opposites of their father, whose loud and blustery demeanour often dominated media headlines. He also has a 10-year-old son, Barron, with Melania.

11. He has eight grandchildren

Mr Trump is grandfather to eight children - five of whom were born to his eldest son Donald Trump Jr and his wife Vanessa Trump, and three born to Ivanka Trump and her husband Jared Kushner.

Ivanka gave birth to Mr Trump's eighth grandchild on March 27. The boy, named Theodore James Kushner, congratulated his grandfather on his recent election win in a video posted by Ivanka on Instagram.

In an interview with Redbook magazine published in April 2013, Ivanka said her father "wouldn't know what to do" if her daughter, Arabella Rose, was crying or needed a diaper change. But she quickly added: "Although I think he'd figure it out. He was always a great father in that he was always there."