1. She used to be known as Melanija Knavs

Mrs Trump was born Melanija (which is also pronounced as "Melania") Knavs in 1970 and raised in the small alpine town of Sevnica in Slovenia, then a part of communist Yugoslavia. She Germanised her name to Melania Knauss after becoming a model.

Her father Viktor was a car salesman known for his smart and imposing bearing - not unlike his famous future son-in-law - and her mother Amlija, to whom Mrs Trump bears a striking resemblance, worked for a clothing factory.

Both parents are described as ambitious and driven, qualities they encouraged in Melania and her older sister Ines. These days they spend much of the year with their daughter and her 10-year-old son, Barron, at Trump Tower in Manhattan.

Mrs Trump also has an older half-brother she is believed to have not met.

2. She is described as reserved and doesn't indulge in excesses

The First Lady to-be, who was largely absent from her husband's election campaign, is a reserved person who "never wanted to be in the spotlight", her childhood friend Mirjana Jelancic told US media. Her ex-boyfriend Peter Butoln described her to New York Times as "abstemious and more wholesome than the other girls" even as a teenager .

As a model, Mrs Trump stayed away from "the scene," and had "no history of boyfriends," the photographer Antoine Verglas told the Washington Post.

3. She speaks five languages, and loves the alphabet

Like many Europeans, the soft-spoken Mrs Trump is conversant in a smattering of languages besides English and her mother tongue of Slovenian: French, German, and Serbian.

Despite having been in the US since 1996, she speaks English with a strong accent. Her favourite phrase is "A-Z", notes the New Yorker. "I follow from A to Z," "I'm from A to Z hands on," "I'm involved from A to Z with every piece I design", she has said.

The clothes horse who professes to love design and fashion once knitted her own sweaters, gloves and leg warmers while growing up in Slovenia. Now she designs her own jewellery.

5. Her discovery as a model was a cliche

Mrs Trump was discovered aged 17 by a photographer while waiting for a friend outside a fashion show. The photographer, Mr Stane Jerko, told US media she was a little "wooden" as a model at first but was diligent and learned very quickly.

The 1.8m tall beauty was signed on by a modelling agency in Milan and went on to appear on numerous magazine covers including Harper's Bazaar and Vanity Fair. She also posed naked on a white rug for British magazine GQ.

6. She violated US immigration laws

The future US First Lady began life in America under dubious circumstances. Arriving in the US on Aug 27, 1996 on a visitor visa, she got paid for 10 modelling jobs the following month, seven weeks before she received her working visa, an investigation by the Associate Press showed.

She received her green card in 2001 and became a citizen in 2006 - a year after marrying Mr Trump. 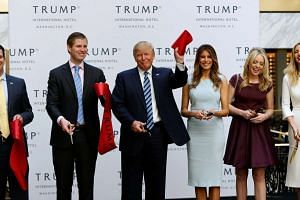 11 things about US President-elect Donald Trump

7. She rejected Mr Trump's advances the first time they met

Mrs Trump refused to give her phone number to her future

husband on their first encounter at the Kit Kat Club in New York in 1998, because he was accompanied by another woman, Norwegian cosmetics heiress Celina Midelfart.

Mr Trump pursued her and they soon began dating. They were married in 2005 and had their only child, Barron, the following year.

"I don't have a nanny. I have a chef, and I have my assistant, and that's it. I do it myself," Mrs Trump told Harper's Bazaar in January. "You know, those hours with your child are really important ones, even if it's just the two of you, being quiet in the car together."

9. She has her own space apart from Mr Trump

"We have our own bathrooms, so that's the key," she said.

Giving her husband his own space is also important, she added. "I'm not that kind of wife who would say, 'Learn this' or 'Learn that.' I'm not a nagging wife."

10. She will be only the second foreign-born First Lady of the United States

The only other First Lady to be born outside of the country was Mrs Louisa Catherine Adams, the British wife of the 6th US President John Quincy Adams who was in office from 1825 to 1829.