WASHINGTON (REUTERS) - United States President Donald Trump on Tuesday (May 14) called the trade war with China "a little squabble" and insisted talks between the world's two largest economies had not collapsed, as investors remained on guard for a further escalation of tit-for-tat tariffs.

Mr Trump, who has railed against what he describes as China's unfair trade practices and threatened to impose punitive levies on all its imports, softened his tone in a series of remarks expressing optimism about reaching a trade deal with Beijing.

"We're having a little squabble with China because we've been treated very unfairly for many, many decades," Mr Trump told reporters, referring to US complaints about Chinese intellectual property and subsidy practices.

Mr Trump also denied that talks with China had broken down after Washington punctuated two days of negotiations last week with another round of tariffs on Chinese imports, with Beijing following suit on Monday with higher tariffs on US goods.

"We have a dialogue going. It will always continue," said the US President, who has announced plans to meet Chinese President Xi Jinping at a Group of 20 summit in Japan late next month.

Mr Trump described the dialogue with China as "very good" and touted his "extraordinary" relationship with Mr Xi.

Earlier, Mr Trump tweeted that the US would make a deal with China when the "time is right" and said that would happen "much faster" than thought. 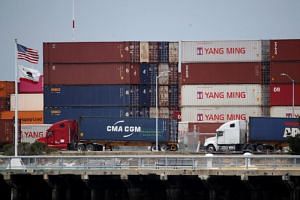 Trump claims US has upper hand in trade war with China

US and European stocks regained ground on Tuesday. On Monday, MSCI's gauge of stocks across the globe posted its biggest one-day decline in over five months and touched a two-month low. The MSCI index gained 0.49 per cent on Tuesday.

"It's a nice bounce-back certainly after yesterday for sure," said Mr Gary Bradshaw, portfolio manager of Hodges Capital Management in Dallas. "It seems like President Trump has been more jovial and more upbeat in making comments that hopefully will get this trade situation squared away. I think that's got investors buying the dip." The pan-European STOXX 600 index rose 1.01 per cent.

Earlier on Tuesday, Chinese Foreign Ministry spokesman Geng Shuang told a daily news briefing that it was his understanding that China and the US had agreed to continue "pursuing relevant discussions".

"As for how they are pursued, I think that hinges upon further consultations between the two sides," he said.

US Treasury Secretary Steven Mnuchin will plan for a trade meeting in China at some point, a US Treasury spokesman said.

US agricultural products have been targeted by China's retaliatory tariffs, and American farmers, a key political constituency for Mr Trump, are increasingly frustrated with the failure of the two sides to find a solution to the dispute.

Soybeans, which was the most valuable US export crop, bounced off a decade low on Tuesday as the market's focus shifted to weather-related planting delays that could reduce the crop size. Some analysts said the worst of the trade news was priced into the market.

In a tweet earlier on Tuesday, Mr Trump appealed to China to buy US farm products.

On Monday, he said his administration would provide about US$15 billion (S$20.5 billion) in aid to farmers whose products were targeted by Chinese tariffs. He did not provide details on the plan, which follows US$12 billion in similar farm aid last year.

There are concerns that the pain from tariffs could spread to the broader US economy, with businesses raising prices on a range of consumer goods. Consumer spending accounts for two-thirds of US economic activity.

Senate Majority Leader Mitch McConnell said on Tuesday that "nobody wins a trade war", but he hoped Mr Trump's tactics in negotiations with China would put the US in a better position to move talks forward with Beijing.

Mr Trump, however, is still dangling the prospect of higher tariffs on Chinese goods.

Trump may be seeking to decouple US economy from China's

As negotiations towards resolving the US-China trade war stalled last week, the US raised the pressure by increasing tariffs to 25 per cent from 10 per cent on a previous US$200 billion list of Chinese imports.

China retaliated on Monday with higher tariffs on a revised list of US$60 billion worth of US products. Mr Trump could launch 25 per cent tariffs on another US$300 billion worth of Chinese goods when he meets Mr Xi next month. The list includes a wide range of consumer goods, from cellphones and computers to clothing and footwear, but it excludes pharmaceuticals, some speciality compounds and rare-earth minerals.

At the same time, China is vowing not to succumb to such pressure. China's Foreign Ministry said on Tuesday it hoped the United States did not "underestimate China's determination and will to safeguard its interests." A further escalation of the trade war could disrupt global supply lines and damage an already slowing world economy, sending financial markets into a tailspin. The US economy, while growing at a healthy clip, could come under pressure.

Sources have said the trade talks hit an impasse after China tried to delete commitments from a draft agreement that said its laws would be changed to enact new policies on issues from intellectual property protection to forced technology transfers.

Mr Geng put the blame on Washington for going back on its word in some previous rounds of talks, including last May, when the two sides reached an agreement in Washington but then the US backed out a few days later.