The pace of the loss is staggering - the equivalent of 30 football fields disappearing every minute of every day in 2018, or a total of 120,000 sq km.

Almost a third of that area, about 36,000 sq km, was pristine primary rainforest, according to the annual assessment from scientists at Global Forest Watch, based at the University of Maryland.

"For the first time, we can distinguish tree cover loss within undisturbed natural rainforests, which contain trees that can be hundreds, even thousands, of years old," team manager Mikaela Weisse told Agence France-Presse.

Rainforests are the planet's richest repository of wildlife and a critical sponge for soaking up planet-heating carbon dioxide (CO2).

Despite a slew of counter-measures at both the national and international level, deforestation has continued largely unabated since the beginning of the century.

Global forest loss peaked in 2016, fuelled in part by El Nino weather conditions and uncontrolled fires in Brazil and Indonesia.

The main drivers are the livestock industry and large-scale commodity agriculture - palm oil in Asia and Africa, soy beans and biofuel crops in South America.

Small-scale commercial farming - of cocoa, for example - can also lead to the clearing of forests. 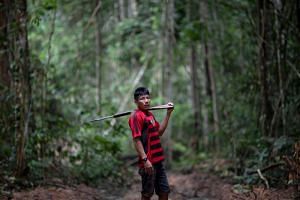 Illegal logging in Brazil turns Amazon into a powder keg

Brazil loses 'one million football pitches' worth of forest

A quarter of tropical tree cover loss in 2018 occurred in Brazil, with the Democratic Republic of Congo and Indonesia each accounting for about 10 per cent.

Madagascar lost 2 per cent of its entire rainforest in 2018.

"The world's forests are now in the emergency room," said Frances Seymour, a distinguished senior fellow at the World Resources Institute, an environmental policy think-tank based in Washington DC.

"The health of the planet is at stake, and band aid responses are not enough," she added.

"With every hectare lost, we are that much closer to the scary scenario of runaway climate change."

Globally, forests absorb about 30 per cent of manmade greenhouse gas emissions, just over 11 billion tonnes of CO2 a year.

Oceans are also a major "sink", soaking up another 23 per cent.

Burning or clear-cutting vast tracts of tropical forest not only releases carbon into the atmosphere, it reduces the size of the sponge that can absorb CO2.

One bright spot in the report was Indonesia, which recorded a 63 per cent drop in primary forest loss compared to 2016.

In 2015, massive forest fires on Sumatra, Borneo and other Indonesian islands levelled 20,000 sq km and generated deadly pollution over a large swathe of Southeast Asia.

In Brazil, however, trend lines are moving in the wrong direction.

"Our data shows a big spike in forest loss in 2016 and 2017 related to manmade fires," Weisse said of Brazil.

"Shockingly, we are also seeing invasions into indigenous lands that have been immune to deforestation for years."

Brazil's President Jair Bolsonaro, who come into office in January, has vowed to curtail environmental regulations and allow commercial farming and mining on indigenous reserves, which comprise more than 10 per cent of Brazil's territory.

Bolsonaro says Brazil rainforest reserve may be opened to mining

The researchers emphasised that Bolsonaro has not been in office long enough to assess the impacts of his policies on deforestation.

In West Africa, meanwhile, 70 per cent of primary forest loss in Ghana and Ivory Coast occurred in protected areas, pointing up the need for stricter enforcement.