LIMA, Peru - Leaders of the Trans-Pacific Partnership (TPP) member countries vowed on Saturday (Nov 19) to press on with the landmark trade deal, which hangs in the balance following Mr Donald Trump’s victory in the US presidential election.

The leaders agreed to continue seeking ratification of the TPP in their domestic legislatures and also affirmed the economic and strategic importance of the trade pact, said Mr Yasuhisa Kawamura, a spokesman for Japan Prime Minister Shinzo Abe, at a press conference.

At the meeting, which took place on the sidelines of the Asia-Pacific Economic Cooperation (Apec) Summit, the US also stated its intention to raise awareness within the country of the trade agreement’s importance, Mr Kawamura said.

Mr Trump clinched the US presidency about two weeks ago on an anti-free trade platform, imperilling the TPP as it can come into force only if it is approved by six countries that account for at least 85 per cent of the group's economic output.

This means that ratification by the United States, given the giant size of its economy, is essential. The other countries include Australia, Brunei, Canada, Chile, Japan, Malaysia, Mexico, New Zealand, Peru, Singapore and Vietnam.

Prime Minister Lee Hsien Loong, who attended the meeting, said that Singapore will amend legislation to bring the TPP into effect and aims to do so by early next year.

He welcomed Japan and New Zealand also taking steps towards ratification, and said the trade deal will set a high standard for future regional trade agreements while fostering prosperity, security and stability.

“Let us continue to take a long view. The world is watching carefully how we will respond,” he told the leaders. 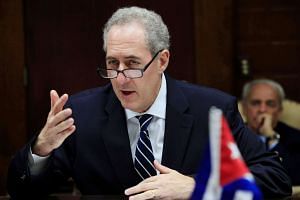 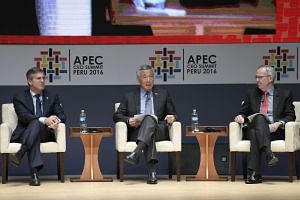 Mr Lee thanked US President Barack Obama for personally leading the TPP, and also noted that all countries have worked hard to take the trade deal this far.

The TPP seeks to, among other things, impose standards on labour and environmental regulations, and the protection of intellectual property.

Mr Obama - in championing the trade deal - had argued that if the US did not take the lead in setting trade rules, it would allow the chance for other countries to set standards that are not as stringent.

Mr Lee added that he "shared President Obama's hope that after the new administration has settled in, deliberated on the matter, and taken advice, it will in due course take a considered decision".

One, the 11 other signatories proceed without the US. Mr Key said New Zealand would gain only two-thirds of the benefits from the current pact if the world's largest economy were excluded.

Two, make what he called "cosmetic changes" down the road so that Mr Trump can present it as a better deal that he secured for the US.

Three, a complete renegotiation of the TPP. But Mr Key highlighted that a lot of time had been spent just to get this far, and it would not be easy to revisit difficult aspects such as agriculture.

Earlier in the day, Chinese President Xi Jinping acknowledged that anti-globalisation sentiments have flared up across the world, but pledged that China will continue to pursue economic integration.

"China's door will never be shut, and will only be opened wider," he told business leaders in his keynote address at the Apec CEO Summit.

He urged Apec economies to persist in achieving the Free Trade Area of the Asia-Pacific (FTAAP), and said China was committed to concluding negotiations for the Regional Comprehensive Economic Partnership (RCEP) - consisting of the 10 Asean countries, plus China, Japan, South Korea, Australia, New Zealand and India.

Both the TPP and the RCEP are seen as possible pathways towards eventually realising the FTAAP.

At the forum that Mr Key was at, the panellists were asked whether the world will turn towards China for economic leadership if the TPP falters.

Mexico President Enrique Pena Nieto said that his country's geopolitical situation meant that the US will always be its closest partner. "Our eyes will always be set towards North America," he said.

Mr Key emphasised that New Zealand enjoys good relations with both the US and China, but noted that the TPP was part of the Obama administration's Asia pivot to refocus the US' resources and project its leadership in the region.

"If the US is not there, that void has to be filled, and it will be filled by China," he said.