Scientists have already warned that unless mankind makes rapid and deep cuts to greenhouse gas emissions, oceans are set to unleash damage far greater than now, including more powerful storms, damage to coral reefs and fisheries as well as accelerated melting of ice caps and mountain glaciers.

The Intergovernmental Panel on Climate Change (IPCC) will release its special report on oceans and Earth's frozen zones, known as the cryosphere, on Wednesday (Sept 25).

Scientists and government officials from 195 nations are now gathering in Monaco to finalise a summary for global policymakers outlining the threats and also solutions.

More than 100 scientists from over 80 countries have compiled the report over the past two years. It is meant to be a definitive summary of the risks of climate change impacts on the world's oceans, polar regions, glaciers and coastal zones.

The report will show just how widespread and far reaching the impacts are now, and increasingly will become, unless humanity dramatically overhauls the way it produces goods and consumes them. It will offer solutions to help countries and cities adapt to rising sea levels and disaster risk reduction steps.

The report follows on from others by the IPCC since last year on global warming of 1.5 deg C and food and agriculture.

The focus on oceans and frozen zones is crucial. 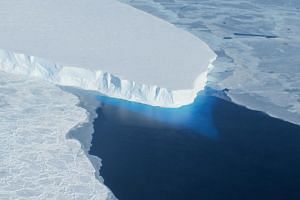 Nature could be an ally in battle against rising sea levels

Oceans act like a giant flywheel that drives the world's climate. They also provide food and other resources vital to humanity. The frozen zones, such as polar ice caps, store the vast majority of the world's freshwater and are very sensitive to temperature changes. If they melt, many areas on the world map will vanish.

Oceans also absorb about a quarter of the carbon dioxide (CO2) emissions produced by humanity and soak up about 90 per cent of the extra heat trapped in the atmosphere by greenhouse gas emissions. For now, oceans are acting as a brake on climate change.

But this is changing. Oceans are already warming, becoming more acidic from the extra CO2 they are absorbing and now contain less oxygen. This is damaging coral reefs, threatening marine life, including fish stocks. Some fish species are shifting further north or south to find cooler waters.

Increasing warmth at the polar regions is speeding up the melting of icesheets in Antarctica and Greenland and melting a vast area of permafrost, which stores large volumes of methane, a far more powerful greenhouse gas than CO2. Rapid release of methane would likely accelerate the global climate emergency.

One recent study found that Antarctica now sends six times more ice plunging into the sea each year than it did in 1979. As the globe warms, this will likely accelerate, the IPCC report is likely to say.

That has huge implications for low-lying megacities and nations such as Singapore, with Prime Minister Lee Hsien Loong recently saying the nation will need to spend $100 billion or more over the next 100 years to cope with current projected sea level rise of about 1m by 2100.

But sea levels could rise much more beyond 2100 and the IPCC report is expected to contain worrying predictions if mankind doesn't rapidly shift to greener economies and lifestyles.

Without deep emissions cuts, 30 to 99 per cent of the northern hemisphere's surface permafrost could melt by century's end, according to a leaked draft of the IPCC report obtained by Agence-France Presse.

By 2050, many low-lying megacities and small island nations will experience "extreme sea level events" every year, even under the most optimistic emissions reduction scenarios. By 2100, "annual flood damages are expected to increase by two to three orders of magnitude" or 100 to 1,000-fold, the draft said.

Many millions dependent on glaciers and snow melt for water supplies will also face dire water shortages in Asia, South America and parts of Africa.

In Asia alone, about two billion people rely on rivers fed by glaciers in mountains from Afghanistan to Myanmar and Tibet. Many glaciers in this region are already melting and vast areas of mountain ice could vanish by 2100, greatly shrinking river flows and likely triggering mass migration and conflict.