PARIS (AFP) - The 2015 Paris Agreement was the first pact under which all nations committed to taking actions to curb global warming, caused mainly by emissions from burning coal, oil and gas.

Here are some key facts about the agreement:

A total of 196 governments, including the Palestinian Authority, have endorsed the landmark deal, and 183 have officially ratified it as of last Saturday (Dec 1).

International agreements can be signed, but become binding only through ratification.

The accord - which becomes operational in 2020 - entered into force in November 2016 when it crossed the threshold of 55 ratifying parties representing at least 55 per cent of global greenhouse gas emissions.

The world's top carbon polluters, in descending order, are China, the United States, the European Union, and India.

The biggest polluter not to have ratified the deal is Russia, which ranks 5th. Turkey and Iran have also failed to ratify.

The agreement allows parties to quit, but notice can be given only three years after entry into force. Withdrawal would take effect a year later. 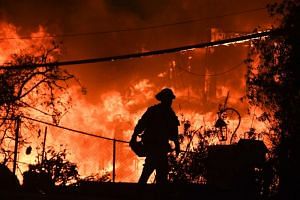 In June 2017, US President Donald Trump announced that the United States would pull out. Under treaty rules, that cannot formally take place until Nov 4, 2020, the day after the next US presidential election.

A country can also withdraw from the 1992 UN Framework Convention on Climate Change (UNFCCC) under whose authority the deal was negotiated. Withdrawal takes effect a year after notification, which can be given at any time.

Nations have agreed to hold global warming to "well below" 2 deg C over pre-Industrial Revolution levels, and to strive for a lower limit of 1.5 deg C, if possible.

A major report from the UN's science advisory body, the Intergovernmental Panel on Climate Change (IPCC), concluded in October that the 1.5 deg C cap is technically feasible but would require a rapid and wholesale transformation of the global economy.

Even the two-degree ceiling is a huge challenge, according to the IPCC, which calculated that emissions must drop 40 to 70 per cent by 2050 (compared to 2010 levels) to hit that target.

Signatories have undertaken to ensure that global emissions peak "as soon as possible". But global greenhouse gas emissions rose in 2017, and are on track to go up again this year.

Voluntary national pledges annexed to the treaty would see the planet warm by at least 3 deg C, a recipe for catastrophic floods, heatwaves, drought and storm surges made worse by sea level rise, say scientists.

Starting in 2020, countries will take stock every five years of their collective progress in curbing global warming, with an eye towards boosting national efforts to cut emissions.

Most current pledges extend to 2030, with a few - including the plan submitted by the US under former president Barack Obama - running to 2025.

But faced with the inadequacy of those pledges and dire warnings from climate scientists that emissions must peak and sharply decline as soon as possible, nations are under pressure to enhance their carbon-cutting commitments sooner.

Rich countries are required to provide funding to help developing nations make the costly shift to clean energy, and to shore up defences against climate impacts.

A running tally published last week by the UN showed that climate finance is roughly on track to hit that total, but disagreements remain over the sources of funding and how much will be earmarked for adapting to climate change.

Importantly, one of the Paris Agreement's long-term goals is to make all finance flows consistent with low-carbon and climate-ready economic development, which will be measured in trillions, not billions, of dollars.