Adding to a growing number of scientific warnings, the report from the UN's Intergovernmental Panel on Climate Change (IPCC) highlights the urgent need to both radically cut greenhouse gas emissions and adapt to the changes already locked in.

Dr Debra Roberts, co-chair of the IPCC Working Group II, said on Wednesday (Sept 25) during a press conference on the report that human-induced climate change has major impacts on the systems human depend on – from the top of the mountains to the depths of the ocean.

“These changes will continue for generations to come. This new report highlights the urgency in prioritising timely, ambitious and coordinated action to address widespread and enduring changes in the ocean and cryosphere,” she added.

The cryosphere refer to the frozen parts of the planet.

The panel's special report on oceans and ice-covered parts of Earth shows just how vital seas, ice caps and glaciers are to mankind and how tightly linked they are when it comes to climate change. Higher temperatures are heating up oceans and causing them to expand and raise sea levels. Warmer oceans and air are, in turn, melting ice caps in Antarctica and Greenland, further raising sea levels.

High mountain glaciers in the Hindu Kush Himalaya region, which provide water for about two billion people, are melting quickly and this could accelerate, threatening drinking water supplies, agriculture and hydropower generation.

"The open sea, the Arctic, the Antarctic and the high mountains may seem far away to many people," said Hoesung Lee, chair of the IPCC. "But we depend on them and are influenced by them directly and indirectly in many ways - for weather and climate, for food and water, for energy, trade, transport, recreation and tourism, for health and well-being, for culture and identity."

Dr Lee added: "If we reduce emissions sharply, consequences for people and their livelihoods will still be challenging, but potentially more manageable for those who are most vulnerable."

More than 100 scientists from 36 nations compiled the report based on nearly 7,000 publications with the goal of summarising the latest science for policymakers around the globe.

The 43-page summary released on Wednesday was approved after a five-day review session in Monaco involving scientists and diplomats.

So far, the ocean has been a friend to humanity by soaking up about a quarter of mankind's carbon dioxide (CO2) emissions and absorbing about 90 per cent of the excess heat trapped in the atmosphere by the thickening blanket of CO2. But as carbon emissions keep rising, the oceans are becoming more acidic, holding less oxygen, and are heating up and fuelling stronger storms. 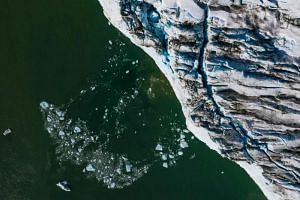 What does the latest IPCC climate report say and why does it matter?

If carbon emissions keep rising at current rates, the oceans will turn to foe, threatening low-lying islands and cities and driving up costs of coastal protection.

At a global scale, coastal protection can reduce flood risk by 2 to 3 orders of magnitude during the 21st century, the report says, but it depends on investments ranging from tens to several hundreds of billion of US dollars per year - which many poorer nations cannot afford.

Slowing the pace of global warming by rapid and deep cuts in emissions could help more countries adapt and limit the costs.

The report says ice loss from Greenland and Antarctic is speeding up and is expected to accelerate from mid-century. Sea level will continue to rise for centuries.

Major uncertainties, though, remain on how ice sheets will react to warming, especially in Antarctica, said Dr Valérie Masson-Delmotte, a co-chair of the IPCC's Working Group One, which looks at the physical scientific basis of the climate system and climate change.

Under the most pessimistic scenario of emissions continuing to rise through this century, sea level rise is projected to exceed rates of several centimetres per year resulting in a multi-metre rise by 2300. Extreme sea levels and coastal hazards will be exacerbated by stronger tropical storms and more intense rainfall.

The report also raises deep concerns over accelerating melting of Arctic permafrost, the thin layer of frozen ground that holds large amounts of carbon and methane, a far more powerful greenhouse gas than CO2. Scientists have long warned of the risk of billions of tonnes of methane being released from melting permafrost, which would speed up the climate emergency.

Permafrost temperatures have increased to record high levels, the report says, adding that Arctic and boreal permafrost hold large amounts of organic carbon, almost twice the carbon in the atmosphere.

If greenhouse gas emissions continue to increase strongly, there is a potential that around 70 per cent near-surface permafrost could be lost, it adds.

Marine heatwaves are projected to further increase in frequency, duration, extent and intensity. Their frequency will be 20 times higher at 2 deg C warming, compared to pre-industrial levels. They would occur 50 times more often if emissions continue to increase strongly, a rate that would destroy most reefs.

The IPCC report comes just days after another major report from leading scientific bodies that showed the world has now warmed 1.1 deg C since pre-industrial times and that climate change impacts are hitting harder and soon than predicted a decade ago.

It said the 2015-2019 period was the warmest five-year period on record and that based on current trends, greenhouse gas emissions at not expected to peak in 2030, let alone 2020.

"An overarching main point that emerges from the report is that choices we make now are going to be key for the future for the ocean and cryosphere (ice-covered areas) of our planet," said Professor Michael Meredith, an oceanographer and science leader at the British Antarctic Survey - Britain's national Antarctic operation.

"This is of huge importance, since the ocean and cryosphere influence global climate, sea level and ecosystems in many diverse ways, and have effects on the lives and livelihoods of everyone," Prof Meredith, a coordinating lead author of the report, told The Straits Times.

"Changes we are seeing are, in many cases, accelerating, such as the loss of ice from Antarctica and Greenland, but choices we make can greatly affect how these changes progress over the coming decades."

In a reference to the global youth climate movement that saw four million students going on a school strike for climate last Friday (Sept 20), Dr Hans-Otto Pörtner, co-chair for IPCC Working Group II, said during Wednesday’s press conference that the young generation is aware of the urgency of the need to tackle climate change.

He said: “They see the future, and the future of the world that should still be there for them to deliver the services it currently still does. They are concerned, and are building their concerns and expressions of concern on the science from the IPCC’s assessments.”

The latest report covers the largest extent of the globe and the interdependencies on the systems.

“So the message is received, and society and policy have the choice to take rapid action as needed to keep those changes under control.”