BEIRUT (AFP) – Saad Hariri, whose resignation as Lebanon’s prime minister a week ago sent shockwaves across the region, said Sunday (Nov 12) he is “free” in Saudi Arabia and will return to Lebanon “very soon”.

In an interview from Riyadh with his party’s Future TV, Hariri brushed aside rumours that he was under de facto house arrest in the kingdom, from which he announced his surprise departure on Nov 4.

In his first public comments since then, he said he was free to travel.

“I am free here. If I want to travel tomorrow, I will,” Hariri said.  “I will return to Lebanon very soon,” Hariri said, adding later that he would land in Beirut “in two or three days”.

Lebanese President Michel Aoun has yet to formally accept Hariri’s resignation and has said Hariri has been “restricted” in his movements.

Hariri, who also holds Saudi citizenship, told journalist Paula Yaacoubian on Sunday that he would “return to Lebanon very soon to initiate the necessary constitutional procedures”.

“Yes, it would have been better that I come to Lebanon (to resign) but there was danger,” he said.  “I wrote (my resignation) with my own hand. I wanted to create a positive shock, not a negative one.”

Wearing a suit and tie and with a Lebanese flag in the background, Hariri looked tired and spoke softly but firmly throughout the interview.

Hariri’s resignation sent shockwaves throughout Lebanon and the region as tensions rise between Riyadh and Tehran, which back opposing sides in power struggles from Lebanon and Syria to Yemen. 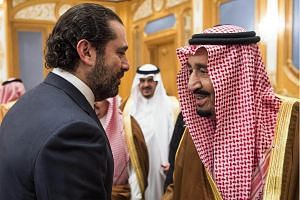 What to know about Saudi Arabia-Iran-Lebanon tensions 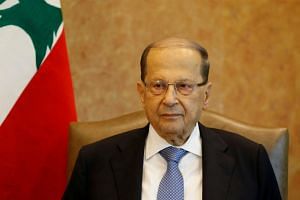 In his resignation statement, Hariri accused Iran and its Lebanese ally Hezbollah of taking over his country and destabilising the broader region, saying he feared for his life.  But his subsequent week-long absence from Lebanon sparked speculation that he is not free to move or leave the kingdom.

Hezbollah chief Hassan Nasrallah, whose movement is part of Hariri’s government but backed by Riyadh’s arch-rival Tehran, said Friday that Hariri was “detained in Saudi Arabia, he is banned from returning to Lebanon”.

Aoun on Saturday called on Saudi Arabia to “clarify the reasons that have prevented the return of PM Hariri to Lebanon to be among his people and supporters”.

He added Sunday that Hariri has been “restricted” in his movements, slamming “the obscure circumstances in which (he) is staying in Riyadh”, a presidency statement said.

Hariri has spent the past week in a string of meetings with diplomats and Saudi officials in Riyadh, punctuated by a single trip to Abu Dhabi.

On Saturday, he attended a reception ceremony for Saudi King Salman who had arrived in Riyadh from the holy city of Medina, and also met with British and Turkish envoys to the kingdom.  In his interview on Sunday, he said he has “excellent” ties with Crown Prince Mohammed bin Salman.

Hariri appeared to be trying to put to rest rumours that the Saudi crown prince had pressured him to step down.

“Really, I consider him a brother and he considers me a brother. It’s an excellent and special relationship,” he said.  But he refused to comment on the internal political turmoil in Saudi Arabia, where dozens of high-profile politicians and businessmen have been arrested in what authorities say is an anti-graft drive.