MOSCOW (AFP) - Russian President Vladimir Putin on Thursday told Dutch Prime Minister Mark Rutte that establishing an international tribunal to prosecute those behind the downing of Malaysia Airlines flight MH17 over Ukraine would be counterproductive.

"Vladimir Putin in detail explained the Russian position regarding the premature and counterproductive nature of an initiative by a number of countries, including the Netherlands, to establish an international tribunal to criminally prosecute individuals responsible for the destruction of the Malaysian airliner," the Kremlin said following a phone call between Mr Putin and Mr Rutte.

The Netherlands - whose citizens made up the majority of the 298 people killed when the plane was downed a year ago over rebel-held eastern Ukraine - is working with Malaysia, Australia, Belgium, and Ukraine on setting up an international tribunal.

A draft UN resolution, obtained by AFP, calls for establishing the tribunal under Chapter 7 of the UN charter, which means that the court's efforts to prosecute those responsible could be enforced by sanctions. 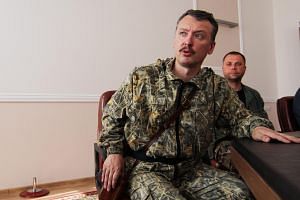 Investigators from the Netherlands are leading an international probe into the downing of the Amsterdam-Kuala Lumpur flight on July 17, 2014, and are expected to release a final report in early October.

Ukraine and many in the West have accused pro-Russian separatists of shooting down the plane, saying they may have used a surface-to-air missile supplied by Russia.

Russia - which wields a UN veto - and the rebels deny any responsibility and have instead pointed the finger at Ukraine's military.

In his conversation with Mr Rutte, Mr Putin insisted that all investigations into the disaster should be completed before any decision can be taken on how to try the culprits.

Mr Putin also lashed out at reported leaks from the Dutch investigation as "clearly politicised", after US channel CNN cited unnamed sources as saying that the final report found the rebels responsible.

On the eve of the one-year anniversary of the crash, Russian state media have criticised the West for alleging Russian involvement before the investigation is complete.

The rebels in east Ukraine boast the heavy weaponry of a regular army but Russia denies that it supplies the hardware across the separatist-controlled border.

The West and Russia are locked in their worst standoff since the Cold War over the Ukraine conflict, with the US and EU hitting Moscow with sanctions over its alleged meddling.