SINGAPORE - A Japanese tourist was robbed of his $1.2 million Swiss watch after a thief approached him for a cigarette and snatched the timepiece off his wrist.

French police said on Tuesday (Oct 8) that the 30-year-old tourist was outside the five-star Hotel Napoleon near the Arc de Triomphe late on Monday when he was robbed.

The rare Richard Mille timepiece is a Tourbillon Diamond Twister, estimated to be worth about  €770,000 (S$1.2 million).

Tourists are easy targets for criminals because some are often unaware of what to watch out for in the first place.

Here are five other common ruses that crooks use to trick, steal from and even rob tourists:

While not many tourists own watches upwards of $1 million, most will not venture overseas without a camera to capture the memorable moments of their trips.

It is unsurprising that cameras are among the most common items that are stolen overseas, with thieves sometimes offering to help tourists take photos before bolting off with the camera.

Popular American travel blogger  Rick Steves warns of an alternative version of the trick, in which crooks pretend to be tourists and ask victims to take a photo of them posing in front of a landmark. 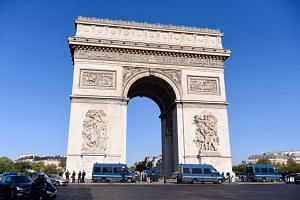 Planning a holiday? Here are 10 tips for your year-end getaway

When the camera is handed back to the criminal, he then pretends to drop it before indignantly insisting that the victim compensate him for the damage caused.

The scam involves a group of criminals approaching tourists to sign a petition to distract them before stealing their possessions.

In 2015, The Daily Mail posted a video of this happening along the river Seine in Paris, when a woman shoved a piece of paper at a tourist without explaining what it was for despite his repeated requests for clarification.

The donations could also go straight into the scammers' pockets, the authorities have warned.

Tourists are advised not to engage with these petitioners, who are often young children and women - some pregnant - to elicit sympathy.

3. 'This bracelet looks good on you'

Street peddlers can prey on unsuspecting tourists by quickly tying a bracelet around the tourists' wrists.

Since some of these items cannot be easily removed, the tourists often feel obliged to pay for them, especially when the peddlers begin to create a scene.

Travel veterans have advised that tourists be firm in saying no to paying for these unsolicited goods, and to keep their hands in their pockets when forced to engage in such conversations.

Some cities, such as Venice and Marrakech, are known to be difficult to navigate, increasing the need for tourists to ask passers-by for directions.

Capitalising on this, some locals have turned this to their advantage, offering to walk the tourists to the destinations for a fee. 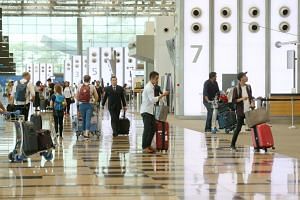 5 travel emergencies and how to handle them

How to keep your valuables safe on vacation

Sometimes the tourists might even be led on a long walk to create the perception of distance when the destination is nearby, in order to trick them into giving bigger tips.

In Europe, cases have been reported where the tyres of cars driven by tourists were punctured by robbers, who then either offer help to victims in return for a fee or rob them when the car stops in a secluded area.

In the Camargue area of southern France, these "highway pirates" even intentionally collide with tourists' cars before forcing them to hand over their belongings at gunpoint.

When a victim reported a similar case to the Catalonian police in Spain in 2018, police said they had seen this happen "one, two, maybe three thousand times before".

The authorities have advised tourists to remove any signs that they are driving a rented car, as well as to keep their valuables in the car boot.