JUJUY, ARGENTINA (REUTERS) - In an arid, lunar-like landscape in the sunny highlands of northern Argentina, South America's largest solar farm is rising, powered by funding and technology from China.

Local officials said they had sought help at home, the United States and Europe without success. Potential lenders and partners, they said, were spooked by the project's size and the fiscal woes of Jujuy province, one of the poorest in the country.

The Import-Export Bank of China saw it differently. The state-funded institution financed 85 per cent of the project's nearly US$400 million (S$ 543 million) price tag. At 3 per cent annual interest over 15 years, it is "cheap money" for Jujuy, a person familiar with the terms said. The catch: the province had to purchase nearly 80 per cent of the materials from Chinese suppliers.

Those companies include Huawei Technologies, the Chinese telecom giant under fire from US President Donald Trump. Some in his administration have concluded, without presenting evidence, that Huawei's equipment provides the Chinese military with a "backdoor" to spy on users or cripple their networks. In Jujuy, the company is supplying inverters, technology that turns power from solar panels into useable current and serves as a critical gateway to the electrical grid.

The project, known as Cauchari, is a testament to the rising clout of Beijing as a backer of big projects in cash-strapped emerging markets. And it is helping China cement its standing as the world's leader in clean-energy technology.

At a time when Trump is doubling down on fossil fuels and withdrawing the United States from global partnerships, Chinese President Xi Jinping's sprawling "Belt and Road" initiative aims to put Chinese companies and innovation at the center of infrastructure development worldwide, including next-generation power sources.

"It is a way of expanding China's growing global presence and dominant economic force, and it progressively reorients the world from the US and European-centric view of the last fifty years," said Tim Buckley, director for the US-based Institute for Energy Economics and Financial Analysis.

He warned repeatedly that Chinese technology, including equipment made by Huawei, poses a security risk that could affect information sharing by the United States.

"It is not okay to put technology systems in with latent capability to take information from citizens of Chile or any other country and transfer it back to President Xi's government," Pompeo said.

But in hardscrabble Jujuy province, home to around 750,000 people, officials are in no mood for a scolding. Argentina has set ambitious renewable energy targets. It is China, they say, not the United States, that is stepping up with money and technology to assist them.

"China...was the one that more generously opened its doors to finance this project," Carlos Oehler, president of Jujuy's energy agency JEMSE, told Reuters in an interview in the provincial capital of San Salvador.

Goodwill from the solar deal has led Jujuy to make purchases from other Chinese vendors, including a contract for surveillance equipment. Governor Gerardo Morales told Reuters that Jujuy and the southern Chinese province of Guizhou have established a "brotherhood" relationship that he is optimistic will lead to more tie-ups.
"We have received visits from many Chinese companies," Morales said.

Huawei, the world's biggest supplier of solar inverters, has repeatedly denied it poses any security risks. The company said in a statement it would continue to provide its customers with "innovative, trusted and secure solutions."

At more than 4,000 metres above sea level, Cauchari is one of the highest solar farms in the world. Reuters is among the few media outlets ever to see it. Rows of panels stretch toward the horizon, while boxes of still-packed equipment wait to be installed. Visitors check in at an on-site clinic to have their blood pressure and heart rates monitored because of the risk of altitude sickness.

Expected to begin sending current to the grid in August, the facility will generate up to 300 megawatts of electricity, enough to power 120,000 homes. A planned expansion to 500MW would boost that to 260,000 homes and bring the project's total cost to US$551 million (S$748.5 million), provincial officials said.

On the windy dirt track leading to the construction site, signs in Spanish and Mandarin proclaim the involvement of state-owned PowerChina construction company and equipment manufacturer Shanghai Electric.

It is yet another indicator of Beijing's rising influence in the region. China is the top buyer of South American soybeans, iron ore and other commodities, while Chinese investors are snapping up stakes in key sectors such as energy. 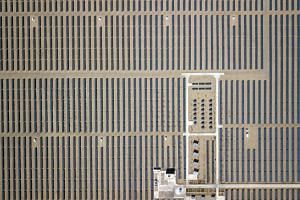 China wants to build the first power station in space

In Argentina alone, China has financed hydroelectric dams and wind farms, and the government is in talks for a Beijing-bankrolled nuclear power project, potentially using China's own Hualong One reactor design. China has invested some US$5.7 billion (S$7.7 billion) in energy projects in Argentina since 2000, according to data compiled by the Global Development Policy Center at Boston University.

Argentina's US-educated President Mauricio Macri attended China's first Belt and Road Forum in Beijing in 2017, a signal of the tightening embrace between the two nations. A number of Latin American officials are expected to be at the second forum later this month in the Chinese capital.

China has spent more than US$244 billion (S$331 billion) on energy projects worldwide since 2000, a quarter of that in Latin America, according to the Global Development Policy Center data. While the vast majority of that capital has flowed to oil, gas and coal assets, China has been the largest investor in clean energy globally for nine straight years, according to the Chinese embassy in Buenos Aires.

China is the world's largest manufacturer of solar panels and inverters, dominance that has seen European and US producers struggle to compete. The Trump administration last year slapped steep tariffs on imported panels, citing unfair competition. But many renewable energy experts credit falling prices for speeding global adoption of solar.

So has China's willingness to finance clean-energy projects in the developing world, opening doors for other Chinese firms. In Jujuy province, for example, the local government inked a deal with Chinese tech giant ZTE to supply it with fiber optic telecommunications systems and hundreds of surveillance cameras in the wake of the solar project.

"(Cauchari) paved the way - a highway - for all other projects," a person familiar with the situation told Reuters.

Jujuy's pivot to China underscores the challenge for the United States, whose warnings about the pitfalls of Chinese backing are no match for Beijing's outreach and resources.

Jujuy Governor Morales recently traveled to China to discuss the Cauchari expansion with PowerChina and the Import-Export Bank of China, one of several trips local officials have made to the Asian nation over the past few years.

Jujuy, with its soon-to-be launched clean power and low seismic risk, is trying to position itself as an attractive location for companies to place their data centers. Morales said Chinese universities in Guizhou are helping Jujuy scale the learning curve, attention for which the long-ignored province is grateful.

"Suddenly Jujuy is recognised in China," Morales said. "We have a path open there."