KATOWICE, Poland (REUTERS) - Climate change is turbo-charging losses from wilder weather and rising seas in rich countries as well as poor - and leaders must figure out how to handle that, experts said as UN climate talks in Poland neared their conclusion on Saturday (Dec 15).

"Loss and damage is no more just a small-island problem," said Laurence Tubiana, CEO of the European Climate Foundation and a key figure behind the Paris Agreement on global warming.

"That countries cannot cope is more and more evident," she said.

Negotiators were working late on Friday night to reach a deal on a "rulebook" on how to fairly and effectively implement the 2015 Paris deal, which aims to curb planet-warming emissions and soften the impacts of climate change.

But how to deal with losses from intensifying storms, wildfires, droughts, floods and sea level rise remained a major sticking point at the negotiations in the city of Katowice.

"Serious damage is already happening, and we need to address this," warned Raju Pandit Chhetri, a climate finance expert with Prakriti Resources Centre, a Kathmandu-based organisation working on sustainable development.

Five years ago, the UN climate talks set up a mechanism to analyse the damage that now will be unavoidable as a result of the 1 degree Celsius hike in global temperatures that has already occurred, and to look at ways of dealing with it.

Frontline countries hope to establish sources of funding that would help them cope with rising losses, and want those contributions adjusted over time to meet changing needs.

But industrialised nations - which have historically emitted the most carbon emissions - have refused to pay any form of"compensation" to those who are less to blame for global warming yet find themselves bearing the brunt. 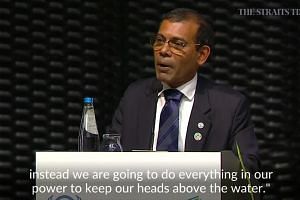 'We are not prepared to die,' says Maldives as small island states pile on pressure at UN climate talks

Deal likely in Poland climate talks, but observers worry it will be watered down

Instead they have mainly offered help with access to insurance policies.

References to dealing with loss and damage from climate change were confined to a footnote in the Katowice text in the late stages of negotiations.

"We do not want to see the Paris Agreement watered down," warned former Maldives President Mohamed Nasheed, who is leading his island-nation's delegation at the talks.

Language on loss and damage needed to be part of the Paris rulebook, he emphasised.

DROP IN THE OCEAN

Analysts said failing to give teeth to the UN loss and damage mechanism would leave poorer countries slammed by climate extremes with nowhere to turn.

The Caribbean island of Dominica, for instance, suffered nearly US$1.4 billion (S$1.92 billion) in damage from Hurricane Maria last year - but received only about US$20 million from a regional insurance plan, said Julie-Anne Richards, an independent consultant.

Under the Paris deal, richer nations have agreed to raise US$100 billion a year from 2020 to help poorer countries adapt to climate change and grow cleanly.

But covering climate losses and damage could require double or triple that amount each year, Richards said.

Saleemul Huq, director of the Bangladesh-based International Centre for Climate Change and Development, said unanswered questions about addressing loss and damage were prompting an experiment in his country.

Bangladesh's ministry of disaster management is launching a two-year pilot mechanism for loss and damage, to improve understanding of potential solutions.

The project will explore, for instance, how effectively insurance can alleviate losses, and try to estimate potential costs from problems such as sea level rise, as well as non-financial losses, including culture.

What Bangladesh finds could inform the UN climate talks, which are trying to establish international systems to help poorer countries cope with worsening losses from climate change.

Nick Mabey, head of the E3G climate change think-tank in London, said it was not only poor countries that needed better information on dealing with more costly climate damage at home.

In richer nations, those discussions are not happening yet, but if the problem became a domestic political issue, it could break the deadlock, he said.

Harjeet Singh, who tracks the talks for ActionAid International, said efforts to support those worst-hit by climate change should be at the heart of the Paris Agreement.

"It's about people and planet, not just about how many solar panels we've put in," he told the Thomson Reuters Foundation.

"If your agreement can't keep people safe, then what is the point of this agreement?"