There is a growing trend where groups of teenagers visit Ikea stores in the day, then hide there at closing time, staying overnight.

And now, the furniture company is telling people to stop it, according to media reports.

A spokesman for Ikea UK told the BBC: "We appreciate that people are interested in Ikea and want to create fun experiences, however the safety and security of our co-workers and customers is our highest priority and that's why we do not allow sleepovers in our stores."

The latest such incident involved two 14-year-old girls in Jönköping, Sweden, who were caught attempting to spend the night in the Ikea store there.

The company chose not to make a police report due to the girls' young age, Ikea spokesman Jakob Holmström told Swedish newspaper Aftonbladet, and instead spoke with their parents to settle the matter.

"We hope that this trend will slow," he added. "We do not see what is fun about it."

TWO IDIOTS AT NIGHT IN IKEA

According to The Telegraph, the first known illegal Ikea sleepover took place in 2015. Florian Van Hecke and Bram Geirnaert, two Belgian pranksters, hid in their local store and filmed themselves doing antics such as jumping on furniture and sleeping in the display beds.

The prank went viral and the video, titled "Two idiots at night in Ikea", has so far gained over 1.85 million views on YouTube.

The prank has inspired copycats. According to the BBC, there have been at least 10 attempts to sleep over in Ikea stores around the world in 2016 so far.

People have hidden themselves in stores in the US, Canada, Britain, Belgium, Netherlands, Japan, Australia and Poland, the BBC said. 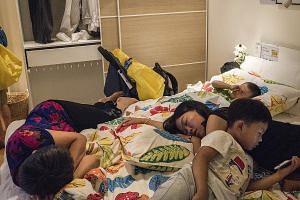 Go to Ikea, go to sleep

While snoozing is generally prohibited at Ikea stores - night or day, the Swedish retailer allows customers in its China stores to take a nap while shopping, rather than alienate shoppers accustomed to sleeping in public.

The retailer has also drawn a line against shoppers wanting to play games in its stores.

Last year, after 19,000 people signed up to a Facebook group about playing hide and seek at one of its Amsterdam outlets, Ikea barred members of the public in the Netherlands from playing the game in its stores, citing security concerns.