The Republic, for instance, is considering engineering strategies, such as empoldering, a land reclamation technique, along Singapore's eastern coast, as well as reclaiming a series of offshore islands there, Prime Minister Lee Hsien Loong had said in his National Day Rally speech in August.

But an upcoming report by the United Nations' Intergovernmental Panel on Climate Change will highlight how nature could be an ally for nations seeking to avoid climate change impacts.

Dr Phillip Williamson, one of the authors of the special report on the ocean and cryosphere, said many types of nature-based solutions exist, with varying degrees of effectiveness.

For example, one natural way to protect coastlines could be restoring vegetated wetlands, such as mangroves, saltmarshes and seagrass meadows.

They can result in benefits like reducing shoreline erosion, and providing storm protection and nursery grounds for fisheries.

"Offshore, coral reefs assist with coastal protection, among other benefits. Such ecosystems can therefore assist in adaptation to climate change, and should be retained wherever possible," he added.

Dr Williamson, who is from the University of East Anglia, was commenting on general trends, and not specifics in the IPCC report, which will be released next week. 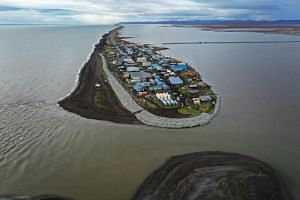 While removing natural coastal defences may seem highly undesirable, Dr Williamson stressed the importance of context, saying the relative merits of including ecosystem restoration or creation in new schemes will depend on local conditions

He noted that some natural habitats could themselves be vulnerable to climate change impacts, like rising temperatures.

"They may not necessarily give the same level of storm protection to high-value infrastructure, such as coastal cities, as well-designed hard defences, such as sea-walls or breakwaters."

National University of Singapore Emeritus Professor Chou Loke Ming, a marine biologist, said all habitats, whether coral reefs or mangroves, can help with coastal defence, like protecting the shoreline from storm surges.

"But because of the rate of sea level rise, we cannot expect them to perform this role on their own, even with the best restoration efforts," added Prof Chou, who is not involved in the IPCC report.

Singapore's best bet is probably a mix of traditional and nature-based engineering, he said, like strategies to encourage corals to grow on seawalls.

"This could have the added benefit of bringing people closer to nature," he added.