SEOUL (AFP) - North Korea is pressing ahead with its nuclear weapons programme while evading sanctions, a United Nations report said, following a series of recent test-launches that have been downplayed by US President Donald Trump.

The reclusive regime has declared a moratorium on nuclear blasts and long-range missile launches, and last year said its Punggye-ri atomic bomb test site would be dismantled as it was no longer needed.

But the report by a panel of experts, published on Thursday (Sept 5), said that despite these moves, Pyongyang's development of nuclear warheads had not stopped.

"The nuclear programme of the Democratic People's Republic of Korea continues to operate, notwithstanding the absence of nuclear testing and the closure of the test site at Punggye-ri," it said.

Trump has embarked on months of personal diplomacy with North Korean leader Kim Jong Un in a so far unsuccessful effort to persuade him to give up his atomic arsenal.

Talks between the two nations have been gridlocked for months since a second summit between the pair collapsed without an agreement in Hanoi in February.

One of the sticking points in the Vietnamese capital was the future of North Korea's decades-old Yongbyon nuclear complex, which has long been at the heart of its atomic programme but remains shrouded in secrecy.

One UN member state "assessed that the Yongbyon uranium enrichment facility continues to operate" between early February and early August, the report said.

In that period, there was no sign Yongbyon's main reactor had been operated, it added, but "the construction of the light-water reactor continues" while "occasional activity was observed at the radiochemical laboratory", possibly for maintenance. 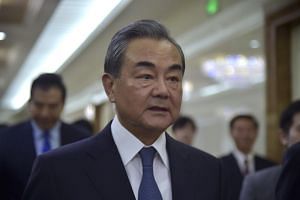 Trump often points to the absence of the North's nuclear testing and long-range missile firing since late 2017 as one of his diplomatic achievements.

But North Korea has launched multiple rounds of short-range missile tests in recent weeks - actions the US president has described as "standard", saying he has "no problem" with them.

With its recent weapons tests, North Korea has demonstrated it can "master key components of ballistic missile systems, including solid-rocket fuel production... and the capacity to penetrate ballistic missile defence systems", the UN report said, citing an opinion of a member state.

North Korea is under heavy US and UN sanctions over its nuclear programme.

The UN panel said it had received assessments from member states indicating Pyongyang had breached an annual cap of 500,000 barrels of refined petroleum through "unabated" ship-to-ship transfers in the first four months of this year.

Trump and Kim agreed to restart working-level dialogue during an impromptu meeting at the Demilitarised Zone dividing North and South Korea in June, but those talks have yet to begin.

Pyongyang has not responded to US calls to come to the table and warned last week its expectations for nuclear talks with Washington were "disappearing".