With less than a month to go before Israelis head to the polls on April 9, the long-serving leader, who is hoping for re-election in a tight race, publicly challenged on Sunday (March 10) one of the country's most popular celebrities - model and TV presenter Rotem Sela.

In the process, he seems to have sparked the ire of Israeli actress Gal Gadot - best known for her starring role in the movie Wonder Woman.

Ms Sela, who's face adorns billboards across the country and who appears on Israeli television in one reality show or another almost every night, had aired concerns about the way Israel's Arab population is being used in a derogatory manner during the campaign.

In a scathing Saturday-night post on Instagram, Ms Sela said she was angry after watching an interview with Mr Miri Regev, a top minister for Mr Netanyahu's Likud party.

Mr Regev warned viewers that if Mr Netanyahu loses the election, his main challenger, Mr Benny Gantz, a former army chief of staff, will have to rely on Arabs to form a government.

"When the hell will someone in this government let the Israeli public know that this is a country for all its citizens and that every person is born equal. And also, that the Arabs are human beings," Ms Sela wrote in an Instagram story to her 830,000 followers.

Apparently, the post caught Mr Netanyahu's eye, and he took the unusual step of answering her directly on Facebook: "Dear Rotem Sela, I read what you wrote. First of all, an important correction: Israel is not a state for all its citizens. According to a basic law we passed, Israel is the nation-state of the Jewish people - and the Jewish people only," he wrote. 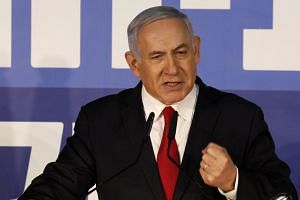 Netanyahu indicted: Is this the demise of the Israeli prime minister?

Benjamin Netanyahu under fire for alliance with racist party

Mr Netanyahu was referring to a law passed last year that declared Israel a national homeland for Jews and prioritised Jewish-only communities. It has left many of Israel's minority communities feeling marginalised.

"As you wrote, there is no problem with the Arab citizens of Israel - they have equal rights and the Likud government has invested more in the Arab sector than any other government," Mr Netanyahu continued on Facebook.

Mr Netanyahu is facing stiff competition from Mr Gantz, who has joined forces with Netanyahu rival Lapid. He is also under strain after the country's attorney general announced recently that he is considering indicting the Israeli leader on charges of fraud, bribery and breach of trust in three separate criminal cases.

Since the attorney general's announcement last month, polls have placed Mr Gantz and Mr Lapid's Blue and White party slightly ahead of Mr Netanyahu's Likud. The surveys, however, predict that the right-wing and left-wing blocs, which either side will need to form a viable government after the election, are running neck and neck.

In his weekly Cabinet meeting on Sunday, Mr Netanyahu reiterated his message to Ms Sela, stating: "I want to respond to a few people who are confused. The state of Israel is not a nation-state of all its citizens; other minorities have a national representation in other countries."

Immediately afterward, he also made reference to International Women's Day, saying that despite progress in women's participation and leadership in various sectors, "there is still much work to do".

He might be right, though he obviously did not reckon on the power of Ms Sela and some female celebrity friends - including Ms Gadot.

Writing to her 28.2 million followers on Instagram, the Wonder Woman actress made clear her support for Ms Sela: "Loving your neighbour as yourself is not a matter of right-left, Jewish-Arab, secular or religious; it is a matter of dialogue, of dialogue for peace, equality and tolerance for each other," Ms Gadot wrote in Hebrew.

"The responsibility for such hope is on us to create a brighter future for our children. Rotem, my sister, you're an inspiration for us all."

We'll have to wait and see whether Mr Netanyahu is willing to go head to head with Wonder Woman.