BEIRUT (AFP) - The US declaration of Abu Bakr al-Baghdadi's death opens the question of his succession at the helm of the Islamic State in Iraq and Syria (ISIS) organisation and analysts say the list looks short.

It was limited further on Sunday night (Oct 27) after Kurdish fighters in Syria said they had killed ISIS spokesman Abu Hassan al-Muhajir - another prominent figure - in a joint operation with US forces.

ISIS social media channels have not confirmed President Donald Trump's announcement on Sunday that Baghdadi had been killed in a US raid in Syria, nor alluded to potential successors.

The second - a Saudi - runs the militant group's so-called Delegated Committee, an executive body, he added.

These "possible options" would nonetheless be controversial, according to the ISIS expert, because neither is a Syrian or Iraqi national, who make up the bulk of ISIS's guerrilla force.

"This could lead to defections," he said. 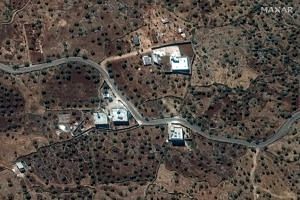 Baghdadi's death will damage ISIS, but not destroy it

With Baghdadi raid, Trump makes the made-for-TV announcement he has long wanted

Islamic State still seen as security threat in many countries

"He turns up in leaked IS documents as a deputy of Baghdadi and to my knowledge, he is not dead," Mr Tamimi said, using another name of ISIS.

"Apart from some texts that mention Hajj Abdullah, not much is known about him except that he was the emir of the Delegated Committee which is the general governing body of IS."

Speculation has abounded around a senior ISIS figure known as Abdullah Qardash - a former Iraqi military officer jailed with Baghdadi in the US-run Iraqi prison of Camp Bucca.

A months-old statement attributed to ISIS propaganda arm Amaq but never officially adopted by the group said he was selected to replace Baghdadi even before Mr Trump declared the self-proclaimed "caliph" dead.

But Mr Tamimi and Mr Hashemi both said the statement was fake.

Fake statements in the name of Amaq routinely circulate on social media networks.

"It was not put out on the official IS channels, it was not disseminated there... it was definitely fake," said Mr Tamimi, who archives and analyses the group's publications.

"Qardash's daughter is currently held by Iraqi intelligence," he said. "Both her and other relatives have confirmed that he died in 2017."

Mr Hashemi also said Qardash - a Turkmen from Iraq's Tal Afar region - would not qualify as "caliph" because he is not from the Quraysh tribe - the same tribe as the Prophet Mohammad.

He said belonging to the Quraysh tribe is seen as a prerequisite for becoming the leader of ISIS.

Whoever gets the job will inherit the difficult task of leading a frayed organisation that has been reduced to scattered sleeper cells after continuous offensives stripped it of its territory in Iraq and Syria.

Divisions have widened within ISIS ranks in recent months, with some supporters blaming Baghdadi for the demise of the "caliphate" in March.

With Baghdadi gone, "IS affiliates have a chance to switch allegiances or simply not re-pledge their allegiance to Baghdadi's successor", said Mr Nate Rosenblatt, a researcher and Islamic extremism expert.

This may give a boost to rival militant groups in Syria such as Hayat Tahrir al-Sham, headed by Al-Qaeda's former Syria affiliate, and the Al-Qaeda-linked Hurras al-Deen group, he said.

But day-to-day ISIS operations are not likely to be impacted by the leadership void, according to Prof Max Abrahms specialising in political science at Northeastern University in the United States.

"It doesn't matter who will succeed Baghdadi", who largely disappeared after he announced his "caliphate" across swaths of territory in Syria and Iraq in 2014, he said.

"When it comes to decision making and operations and recruitment, IS was much more decentralised than even Al-Qaeda", whose founder Osama bin Laden was also killed in a US raid in 2011, he added.

"When bin Laden was killed, the question of who would replace him was more relevant, because bin Laden exercised more control over Al-Qaeda than Baghdadi did over IS."

ISIS has invested in an elaborate bureaucratic structure that could compensate for the loss of its leader, according to Mr Charlie Winter, a researcher at King's College London.

"Jihadi groups are most likely to survive or strengthen through decapitation strikes when they have bureaucratic systems and structures in place," he told AFP.

"Few (if any) have as many bureaucratic systems and structures as IS, so I'd expect it to double down, not disintegrate."